Do You Know The Way To "Pompeii"? 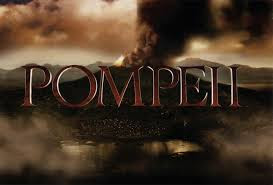 "Pompeii" was a disaster of epic proportions. The city of Pompeii didn't fare too well, either.

Today I'm going to share a sure fire recipe for disaster so you, too, can create your own epic (failure) like 2014's "Pompeii" (3-D not included).

First, hack off big, meaty chunks of the movie "Gladiator", especially the parts where the main character wants to avenge the brutal slaying of his family. Chop them up into bite-size pieces and toss them in a mixing bowl.

Next, grind up an entire episode of the glitzy soap opera "The Bold and the Beautiful". Place in the mixing bowl. 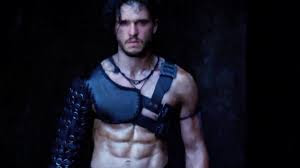 "I'm sexy and I know It": The Celt (Kit Harington) is ripped and ready for action.

Now you are ready to add in your hero, a totally ripped dude if possible. In the case of "Pompeii" that honor goes to Kit Harington, best known for his role in "Game of Thrones". Here he is cast as "The Celt", a slave forced to be a gladiator, who wants nothing more than to avenge the needless slaughter of his family.

Never mind if the hero and heroine's romance and/or personalities don't jell or if the script writers haven't bothered to develop this crucial aspect of the flick beyond a few Meaningful Stares and a couple of lip locks. Just keep stirring!

Next you should toss in the following Stock Characters to round out the cast and pad out the film: the Doomed Friend (here played by Adewale Akinnieaye-Aglaje, a fellow gladiator who needs just one more victory in the arena to earn his freedom and return to his family); the slave girl/lady-in-waiting (Jessica Lucas) who is besties with her boss; and the devious, greedy gladiator promoter (Joe Pringue) who will get his Divine Come-Uppance when the volcano towering over the city of Pompeii finally blows its stack.

Last, but not least, you must plop in your villain. That brings us to Kiefer Sutherland (son of actor Donald and ex-cuddlemate of Julia Roberts), who essays Roman Gen. Corvus in the best tradition of Snidely Whiplash and Ming the Merciless. General Corvus not only offed the Celt's entire family, but he's been lusting after Lady Cassia, too. Naturally, Corvus can't for the life of him figure out why Cassia would prefer the ultra-ripped Celt to him, completely ignoring the fact that Harington is on the mega-hit "Game of Thrones", while his show "24" is now in reruns. Conversely, Corvus makes a real pest of himself trying to A) knock off the Celt and B) force Cassia to marry him. 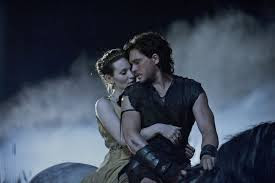 "I'm Back in the Saddle Again": cuddlemates Cassia and the Celt round up some romance.

Alright, once these key ingredients have been thoroughly stirred, you can set your mixture aside for a moment and let it settle for a bit.

Now please take out a much smaller bowl and your handy cheese grater. One by one, grate these lumps of cliche's into a fine powder: hostility between the Roman bigwigs and the small town citizens of Pompeii; Lady Cassia's father trying to hustle new development plans with the sneering Gen. Corvus; the Celt revealing his true name to his fellow gladiator pals; several rigged, slo-mo battles in the gladiatorial arena where the hero defies all the known laws of physics and gravity when he leaps from out of nowhere to spear some baddie; and one huge CGI volcano that rumbles, grumbles and belches out more noxious fumes than your drunk Uncle Louie on Thanksgiving.

After your cliche's have been grated into cheese dust, sprinkle half of them on top of your settled mixture.

Next find the biggest, deepest baking pan you own. Pour your mixture into the pan; smooth out the top with a spatula. Then sprinkle the rest of your cheese dust on the goo, making sure every square inch of the pan is covered.

Slide the pan into your oven. Crank up the heat as high as it can go. Inside, the soupy mixture will bubble, boil, churn and pop as all the various elements coalesce into a mushrooming mess of underdeveloped storytelling, scanty character development, dull cliches, plot points ticked off like items on a grocery list and Keifer Sutherland's epic sneering and ludicrous British accent. 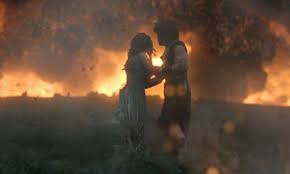 "I guess trying to out run a lava flow was a bad idea!" Cassia and her Celt make a mad dash to safety.

Wait for smoke to start gushing out of your oven. Then stand back as the whole sorry CGI mess explodes like a potato in the microwave and you are done.

Open cold on a Friday to gather in all the box office cash you can before word-of-mouth sinks in and your MESSterpiece ends up on home video, cable and dubbed on YouTube.

For more tasty recipes for disaster, please return to this blog at regular intervals.

And remember, Save The Movies!