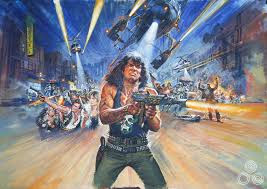 All the fire power in the world can't force citizens to "Leave The Bronx"--or watch the movie!

Sorry for the long lag time between articles. So let's get right to work, OK?

New York is loud, crowded and dirty. Space is tight, traffic is clogged and parking is non-existent. The people are rude. Everything is over-priced. There are alligators in the sewers, bed bugs in the mattresses, cockroaches on the floors and rats everywhere.

However, New York has a very active theater community and the musical "Cats" is probably still running!

"Who you callin' Trash?": Mark Gregory in the role that made him shameless.

You'd think if people had the chance to leave New York--or one of its outlying areas, like, perhaps, the Bronx--they's jump at it.

Not according to "Escape 2000" aka "Leave the Bronx", a cascading cheese fountain from Italy circa 1983, where hardcore citizens wage war against an evil corporation that wants to clear out the Bronx BY ANY MEANS NECESSARY in order to build "the city of the future."

The plot goes like this: the super evil, money-grubbing General Construction Corporation (GC for short) wants to build "the city of the future" on what is currently the Bronx. To do this, the GC people have been offering Bronx residents financial compensation, new homes and "and a higher standard of living" in New Mexico. Quite a few folks have pulled up stakes and left, but others stubbornly refuse to budge. To convince the hold-outs to leave, the GC Corporation has engaged "Dis-Infestation Squads" to round up and kill citizens via flame throwers, bombs and showers of bullets.

Violent, sure, but effective.

The head of these Dis-infestation Squads is the previously mentioned Floyd Wangler, a dedicated sadist who refers to the hapless Bronx residents as "rats" and screams all of his commands at the top of his lungs.

"I love my job!" Smiling sadist Floyd Wangler (Henry Silva) uses his own form of persuasion to get people to leave the Bronx.

"No sugar!" he hollers after being given his cup of morning joe. "Sugar makes me crazy!"

Meanwhile, two very different men are defying the GC Corporation: Toblerone, who dresses like a pirate and laughs hysterically at everything he says ("Look who's talking! Superman! Ha, ha, ha, ha!") and Trash (Mark Gregory), a chap who looks like the unholy result of a three-way between Valerie Bertinelli, Gino Vannelli and Kenny G.

While Toblerone lives underground with an army of followers who dress like extras from "Solid Gold", Trash resides above ground with his bickering parents. Trash also runs ammo for Toblerone, which has made him a target for the GC baddies. Unlike Toblerone, Trash is a man of few words. Literally. He barely utters a peep through out the whole flick and he's the movie's "break out" star!

Then one day the GC Dis-Infestation Squads barge into Trash's family apartment. Not only do the DS-ers fry Trash's parents to a crisp with their flame throwers, they also rig the building with explosives. Earlier Trash had refused to join Toblerone's gang; however, after the murder of his parents and the demolition of his flat (which Trash survives without a scratch), our hero changes his mind.

When we next see the Dis-infestation Squads, they are solemnly marching a rag-tag band of homeless people off to...somewhere. Little do these creeps know, Toblerone's gang is preparing an ambush. That ambush includes Trash, who is hiding under a blanket. When a Dis-Infestater(?) pulls the blankie off, Trash shoots him in the face. That's the signal to unleash hell. Or, rather, that's the signal to unleash a slo-mo hell, as if the Bronx existed in zero gravity. That's the only way to explain why the blood squirts like molasses in January and people crumple to the ground v-e-r-y  s-l-o-w-l-y during the ensuing fight. 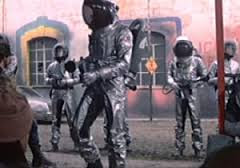 Watching this horrific sight (from a safe distance) is plucky "reporter girl" Moon Grey (Valeria D'Obici). Born and raised in the Bronx, Moon has been dedicated to exposing the GC's evil deeds. She (along with her photographer friend Jay) even crash a GC press conference to declare, "The GC Corporation sucks!"

At Moon's urging, she and Jay plan to release pictures of the Dis-Infestation Squads in action. "OK," Jay says. "But remember: if they catch us, we've had it."

Truer words were never spoken. After snapping a series of incriminating photos, Jay turns around to find a DS goon right behind him, his flame thrower poised and ready. Although Moon manages to escape, shutterbug Jay is toast. Burnt toast. Seriously burnt toast.

Lucky for Ms. Grey, Trash finds her hiding and takes her down to Toblerone's lair. While the pirate king's followers scurry around reinforcing the barricades, Moon tries to convince Toblerone that his flashy troops are no match for the DS' fire power. Instead, she urges him to kidnap the GC Corporation head, known as President Clark (Ennio Girolami), and negotiate a cease-fire.

In order to nab President Clark, however, Toblerone and Trash will need some help. This comes in the form of Strike (Timothy Brent), a volatile demolition expert and master criminal who successfully cleared out "the First National Bank." Since the GC "Leave the Bronx" crack-down, Strike has been living under the sewers of NY with his young son, Strike Jr. This tyke, who dresses like Che Guevara, helps dad with all his robbery and explosive work. 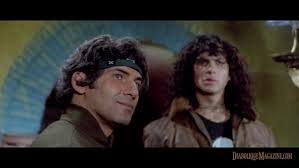 Strike and Trash form "a team of rivals" to save the Bronx.


With this crack team in place, our rebels journey out into the open to kidnap President Clark, who is conveniently appearing at a ground breaking ceremony for "the new children's hospital"--a pr stunt meant to distract folks from the DS carnage. Despite a heavy police presence, Strike easily nabs President Clark after Moon creates a distracting scene that, sadly, gets her killed.

What follows next is a tedious slog through the sewers of New York, with Strike and Trash jabbing Clark in the hinder with their rifles and ordering him to stop complaining and to get a move on. Meanwhile, the DS are hampered in their rescue attempts by Strike, Jr.'s cleverly placed bombs. Without fail, the DS goons constantly trip wires which cause their silver jump suited bodies to either fly through the air or burst into flames. After that gets old, Strike, Jr. then picks off  assorted DS-ers like fish in a barrel with his handy gun. From the smug smile of satisfaction on his face, it's clear dad has trained junior well.

Judging from their extremely high body count, one could conclude that the Dis-Infestation Squads need better training to be a really effective tactical unit. However, other issues may be at the root of their inept performance. See, in a shocking plot twist NOBODY SAW COMING, President Clark's second in command (Paolo Malco) is found to be in cahoots with (gasp!) Floyd Wangler. They don't want President Clark rescued--and if Toblerone's flashy followers don't dispense with Mr. Clark, they will.

Finally our conquering heroes return to Toblerone. Sizing up their captive, Toblerone declares in his own inimitable way, "He's got two arms! He's got two legs! He's just like us! Ha, ha, ha, ha!" However, the laughter stops when Floyd Wangler and the DS burst in. Spraying tear gas and bullets in equal measure, they cause a hysterical stampede that allows President Clark to escape...right into the arms of Mr. Wangler.

"Boy, am I glad to see you!" President Clark exclaims.

"So am I Mr. President," Floyd grins before sending the embattled GC Corporation head to meet his maker. 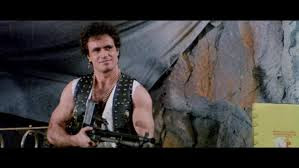 A rare shot of Toblerone (Antonio Sabato) not laughing.

While all of this is going on, the battle for the Bronx is raging in the streets. Toblerone's forces and the DS are shooting, punching, stabbing and basically offing each other in a frenzy not seen since the Army of the Dead attacked the Wildlings at the end of season 5 of "Game of Thrones". Also joining in on the fun is Floyd Wangler, driving his white van at warp speed and mowing people down left and right. He takes the occasional pot shot out his window, too. However, when he crashes his van and gets out into the open, Floyd comes face to face with avenging hero Trash. Naturally, it doesn't take long for Trash to send Wangler bye-bye for good.

Then, as quickly as it began, the battle for the Bronx is over. The Dis-Infestation Squads have beat a hasty retreat. An eerie silence descends. The bodies of the dead and wounded litter the streets. Crashed cars smolder in heaps. Smoke wafts from burning tires and bombed-out buildings. Emerging from the rubble is Trash, shaken, but alive. The expression on his face seems to ask, "Will all this humidity frizz out my hair?" Before that can be answered, Strike and his son appear. Surveying the damage, they conclude their work is done and prepare to head for in the sewers.

But no. Trash merely shakes his head and waves them goodbye. The sewers are no place for him. With his parents gone, his home gone and his bike gone, Trash understands he must make a new life for himself. Perhaps he will go somewhere far away, beyond the mean streets of the Bronx and New York in general. Some place different...like, say, New Mexico. He's heard there's lots of housing available.

In case your wondering, the uncut version of "Leave the Bronx" boasts 174 deaths in its running time. According to the IMDb, the break down goes something like this: 110 shootings; 40 explosions; 9 deaths via flame throwers; 1 stabbing; 4 deaths called "unknown"; 6 electrocutions; 2 faces bashed in and one poor sap who meets his end with the help of a rifle butt.

Someone also dies "off screen".

Novice actor Mark Gregory runs the gamut of emotions from A to B.

Despite its "futuristic" urban setting, "Escape 2000" aka "Leave the Bronx" was no box office champ. Part of the problem might have been the flimsy script, the spotty dubbing, the crazy costumes and the obviously bogus "New York" setting. Even if the closest you've been to New York and its environs is watching "Annie Hall", you know this movie was not shot anywhere in the United States, let alone the Bronx.

Another problem falls squarely on the shoulders of the flick's "discovery" Mark Gregory. Born Marco Di Gregorio in Rome, "Mark" was a motorcycle junkie and an "expertly trained Greco-Roman school wrestler" who was working in a shoe store when he was "discovered". He had never acted before and proved to have all the charisma of a crash test dummy fitted with a fright wig. Gregory allegedly beat out 2,000 other hopefuls for the coveted role of Trash--which makes you wonder how awful those other actors must have been if Gregory was the best of the bunch.

Sadly, after brief brush with fame, Mark Gregory drifted off into well deserved obscurity. He is not known to have made any other films, under his stage name or his real one. Perhaps like his on-screen alter ego, Mark wants to leave all memories of the Bronx--and this movie--behind. Let's all respect his wishes.