Huzzah! It's "Jack the Giant Killer"! 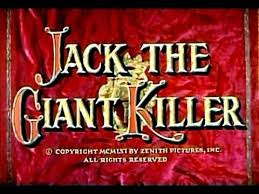 The opening credits for "Jack the Giant Killer": What could possibly go wrong?

Hey, kids! Are you in the mood for a whimsical adventure in a far-away land with giants, wizards, monsters and a princess who finds true love with simple country lad? Then watch "The Princess Bride"! However, if you are in the mood for a tale about witches, wizards and cheesey special effects, seek out and find "Jack the Giant Killer", an obscure family flick that proves kiddie entertainment was just as nutty in 1962 as it is today!

Our tale begins in "the kingdom of Cornwall", where heiress-to-the-throne Princess Elaine (Judi Meredith) is celebrating her birthday. Among her many gifts is a music box shaped like a castle that houses a dancing Harlequin. A dancing Harlequin that looks like Ernest Borgnine, by the way.

Turns out the mysterious chap who gave HRH the music box is the ultra meanie Pendragon (Torin Thatcher), better known as "The King of the Witches." You see, many years ago, an ancestor of the current King Mark banished Pendragon and all of his ghoulies and ghosties to a creepy, fog shrouded castle way off the bus line. Pendragon, don't you know, was seriously miffed about this turn of events and has spent the intervening years plotting and scheming his revenge.

And what is Pendragon's revenge, you ask? Well, that music box with the dancing Ernest Borgnine? When Princess Elaine goes to bed at night, the claymation Harlequin turns into a horned giant that crashes through the palace roof. The giant then snatches up the screaming princess and heads for the hills. The King of the Witches wants to be the King of Cornwall and he needs Princess Elaine to achieve his goal. Realizing that he's not "a people person" and that the citizens of Cornwall would never accept him as their monarch, Pendragon decides to kidnap Elaine in order to A) turn her into a witch, B) force her pa King Mark into exile, C) plant Elaine on the throne and then D) rule through her as an evil puppet-master.

Hey! That sounds just like what Dick Cheney did in the last Bush administration--except instead of turning W into a witch, he had to settle for a court jester (rim shot!). 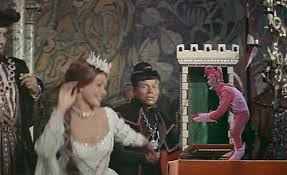 Princess Elaine busts a move with a "magical" Harlequin. Little does she know her partner is an ugly giant in disguise.

Now imagine the surprise of simple country lad Jack (Kerwin Matthews), going about his daily chores, looking up and seeing a claymation giant stomping through his farmland with a shrieking girl in his paw. A quick thinker, Jack realizes the giant is taking poor Elaine (he doesn't know she's a princess yet) to a boat manned by Pendragon's flunky Garna (Walter Burke). By using an axe, some rope and a handful of cornmeal, Jack manages to save Elaine, kill the giant AND push Garna into the drink. His bravery wins Elaine's heart and she thanks Jack profusely.

"It was nothing," Jack jokes modestly. "I always kill a giant before breakfast. Starts my day off right!"

King Mark and his posse arrive a short time later. For his bravery, the king upgrades Jack to Sir Jack and Elaine gives him a kiss. The nobles throw Jack a party at the palace and it looks like happy days are here again at Cornwall. Unfortunately, the palace historian throws cold water on the celebrations by discovering that the recently deceased giant was the handiwork of witch king Pendragon, whom everyone believed was dead or at least no longer in the business of being evil. Realizing that his daughter is not safe in town, King Mark decides to send her to a convent for safekeeping. Disguised as simple peasant folk, Jack will escort Elaine to her new home.

This plan seems like a winner, except, unbeknownst to anyone else, sweet Lady Constance (Anna Lee, best known to "General Hospital" fans as Lila Quartermain) has been bewitched by Pendragon. When this happened is anybody's guess. After waiving Jack and Elaine off, Lady Constance excuses herself and releases Gaunt the raven with all the details of HRH's where-abouts. The baddie Pendragon receives the message and begins scheming up a new plan.

Meanwhile, Jack and Elaine are totally enjoying their boat ride to the convent. The captain of the vessel has a young son named Peter (Roger Mobley), who, he brags, "is smart as paint."( Personally, I have never thought of paint as smart, so where the proud father came up with this idea is beyond me. Paint can be many things, such as bright and colorful, but it's not smart because paint can't think. Dad must have been unduly influenced by Mitt Romney, who lectured that "corporations are people my friends." That always made me want to lecture Mitt in return that, no, corporations are not people; they are staffed and run by people which is not the same as actually being a person. But I digress). Nobody except Jack knows Elaine is a royal, which gives the couple privacy to get all kissy-face without anyone altering the tabloids or TMZ. 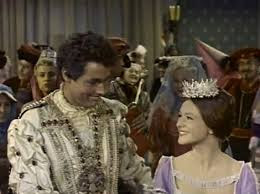 Princess Elaine and the newly created Sir Jack party like it's 1499.

The cuddlemates romantic interlude is dashed, however, when Pendragon sends over a fleet of ghosts in molting Halloween costumes. The ghosts kick up a nasty wind storm that allows them to fly off with Elaine. When Jack insists the ship must sail on to rescue the princess, the crew mutinies. In fact, they refuse to believe Elaine is their princess and even throw Jack overboard! Young Peter dives in after him--his pa died in the wind storm, so there is no reason for him to stick around.

In due time, Jack and Peter are fished out of the sea by a friendly Viking (!) named Sigurd (Berry Kelley). It's on Sigurd's tug that we are introduced to The Imp (Don Beddoe), a lively leprechaun who talks in rhyme. The Imp has been imprisoned in a Chianti bottle by the King of the Leprechauns as punishment for dabbling in "the black arts." The only way he can be freed is if he performs three good deeds for a nice person. How will The Imp know if a person is truly nice? If a person is bad, the Chianti bottle will burn their hand if they touch it. Sigurd, for example, has done plenty of carousing in his day, so he's out. Jack, on the other hand, passes the bottle test with flying colors.

While all this is going on, poor Princess Elaine has been turned into a witch. Now sporting yellow eyes, lilac skin and fingernails as long as skateboards, the perky princess looks like Lady Gaga's kid sister. His job done, Pendragon informs King Mark that he has one week to vacate the throne or else.

His Majesty is heart broken, of course, and can't figure out who for the life of him spilled the beans to evil Pendragon. Then he spies Lady Constance sneaking out of the throne room. Traitor! King Mark orders his guards to tackle the Lady and drag her in front of a mirror. By doing so, Lady Constance's evil reflection will appear. In order to break the spell, a guard breaks the mirror; there is a puff of green smoke, and Lady Constance is back to her old self. The noble woman breaks down and begs the king's forgiveness, which is granted, no hard feelings, and she excuses herself to go take a nap.

With the help of Sigurd, Peter and The Imp, Jack eventually arrives at Pendragon's castle. There he is confronted by a troop of warriors so bow-legged they could walk over a barrel and so stiff it appears they have yardsticks rammed up their collective hinders. The Imp's magic helps Jack defeat these baddies, as well as thwart Pendragon's plans to turn Jack into a rat. He also manages to rescue the grateful Princess Elaine and race off to the safety of Sigurd's boat. 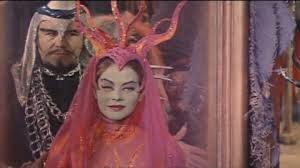 "I Was Not Born This Way": Princess Elaine (with Pendragon) gets a wicked make-over.

If this all sounds a little too easy, that's because it was meant to be too easy. Elaine is a witch now, remember? When Jack's not looking, she drugs his drink and soon enough they are back at Pendragon's castle, only this time Jack is chained up and poor Sigurd and Peter have been captured as well. Pendragon realizes The Imp is the source of Jack's power and he wants the little guy for himself. When Jack refuses to tell where The Imp is, the King of the Witches turns Sigurd into a dog and Peter into a thong-wearing chimp. Still, Jack won't budge. So Pendragon gives Jack until the sands of an hour-glass run through to cough up The Imp or die. Shortly thereafter, Elaine reveals her own witchy transformation, which horrifies her boyfriend. Just when things seem pretty hopeless, Peter (now a chimp, don't forget) unlocks his cage and sets Jack free. This allows Jack to drag Elaine in front of a mirror and shatter her she-devil reflection, which returns HRH back to her normal perky self. Then the gang of four race out of Pendragon's castle again, this time for real.

Furious that his prisoners have escaped, Pendragon does what any witch king would do: he turns himself into a claymation bird-type critter and flies after them. This leads to the flick's epic final battle, with a claymation Jack jumping on the Pendragon/bird-type critter's back and repeatedly stabbing him in the neck. After about, oh, 100 jabs, the Pendragon/bird-type critter dies and falls into the sea. The witch king's death not only lifts the curses off Sigurd and Peter, it causes Pendragon's creepy castle to collapse into dust as well. Now the Kingdom of Cornwall is truly free at last.

Oh, about The Imp. He has completed his required three good deeds and is thus freed by Jack. Before the leprechaun leaves for Ireland, he advises Princess Elaine to marry Jack. HRH whole-heartily agrees to do so, although whether Jack actually planned to propose is another matter entirely. It is on this happy (?) note that "Jack the Giant Killer" ends. Huzzah!

Now, I know what you're thinking. "Auntie Beth," you say. "This is a kid's movie! It doesn't seem so bad! Why must you bee so hard on a kid's movie!? That's not nice!"

Your point is well taken. And this is my answer: Please, A) Watch the movie yourself, B) I am an equal opportunity offender and C) I never said I was nice! Once you get an eye-full of "Jack"s wacky costumes, cheesy F/X, Peter the chimp's thong and the hero's plastic hair, you might just think differently. And simply because a movie is made for kids doesn't mean it can't be bad. "Santa Claus Conquers the Martins" was made for kids and it's VERY bad. "The Blue Bird" was made for kids, too, and it's also very bad. In fact, one film critic of the day even suggested making bratty kids watch "The Blue Bird" was fitting punishment for their misbehaving. The same for the musical "Dr. Dolittle." And while we're at it, all the Pokeman movies and the Ninja Turtle movies are BAD, too...and not just for kids! For anybody that loves movies, these flicks are toxic waste dumps on film stock. The difference is you can have fun watching the badness of "Jack the Giant Killer", while all the previous flicks just suck up your hard earned cash. 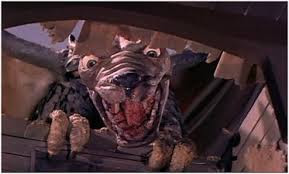 "Here's Johnny (actually Pendragon)!" The King of the Witches takes to the unfriendly skies as a rogue flying critter.

Therefore, movie lovers, remember that badness has no age limit, and SAVE THE MOVIES!