You Won't Believe Your Eyes...Or The Movie. Faye Dunaway Strikes Again In "The Eyes of Laura Mars"

Primal Scream Therapy? No, it's just Faye Dunaway at her most understated in "The Eyes of Laura Mars", a bonkers thriller that's a real fashion fail.

When Faye Dunaway made "Mommie Dearest" in 1980, she dealt her career a body blow it has yet to recover from. Hard to believe that four years earlier the gal shrieking, "No wire hangers!" had won the Best Actress Oscar for "Network"--where, admittedly, Dunaway did plenty of shrieking as well. In fact, the entire cast did nothing but shriek. "Network" is one movie that did not need Dolby Surround Sound or any kind of sound system; you could hear it a mile away. But I digress...

How did such a turn-around happen? Not by accident, I assure you. Ever the perfectionist, Dunaway prepared for her over-the-top "Mommie Dearest" hysterics by performing over-the-top hysterics in "The Eyes of Laura Mars" (1978), a totally bonkers slasher flick/romance where the beleaguered heroine must fight off the horrors of a murderous stalker, deadly visions and disco music--all without mussing her hair or smearing her make-up, mind you.

Laura Mars (Dunaway) is a world famous photographer who specializes in sexy, brutal fashion photos where models in fishnets and furs punch each other in front of burning cars. Of course, her work is highly controversial, but Laura doesn't understand why. She's merely chronicling the chaos of the times, after all. When she's pressed by reporters about her photos glamorizing violence or demeaning women, an impatient Mars sighs, "Doesn't anyone have anything positive to say?"

Then comes the night of her big splashy book launch party, where the fashion crowd and the Beautiful People sip champagne and boogie to the melodious strains of KC and the Sunshine Band. Harshing everyone's buzz is the arrival of the police. Turns out Laura's book editor has been fatally poked in the peepers. This unnerves the star shutter-bug because she'd recently had a bad dream which depicted that very thing. Less upset than annoyed is Laura's publisher Ellen (Rose Gregorio), who can't believe someone would have the nerve to get killed on such an important night. 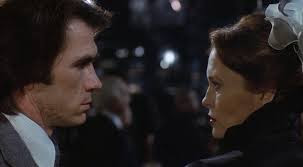 "Why does everything have to happen to me?" Ellen fumes.

Unfortunately, Ellen is offed right quick and in the same way. Laura was busy shooting a lingerie spread in Columbus Circle when suddenly the whole grisly scene played before her eyes from the killer's POV. How is this possible? Beats me. The movie doesn't explain how this phenomenon could possibly take place, even though it's a major plot point. Anyhoo, the photog freaks out and soon the whole fashion crew are cooling their high heels in the police station.

That's where Laura meets investigating police detective John Neville (Tommy Lee Jones). Sporting Shaun Cassidy's feathered locks and a unibrow, Jones is confused by Dunaway's explanation of how she "saw" the murder of Ellen without being there. He's also rather keen on finding out why some of Laura's recent fashion photos so closely resemble unreleased crime scene snaps.

"You think I committed the murders and then recreated them as photographs!?" Mars sputters. "I don't buy it!"

Well, OK, fine, suit yourself. Alas, that pesky problem of Laura's friends and co-workers getting fatally popped in the peepers just keeps getting worse. After Ellen, bimbo models Lou Lou and Michelle meet the same fate. Then Laura's flamboyant agent Donald (Rene Auberjonois) is knocked off. His death, however, is a partial case of mistaken identity, as he was wearing Laura's hat and coat. Why was Donald doing this? Because Laura's louse of an ex-husband (Raoul Julia) was having an affair with Ellen and he's wanted for questioning by the cops and he's afraid and on the run and could Laura please meet him? Inexplicably Laura says yes, but she has police protection and where Laura goes the police follow. Thus Donald dresses up as Laura to fool the police...oh, look, just watch the movie yourself if you think I'm making this up. Although Donald's drag act does fool the killer, I bet the baddie was mad when he realized he'd been duped. 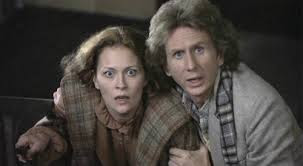 Separated at birth? Brother and sister? Laura and her agent Donald (Rene Auberjonois) share the same horrified expression (and hair).

Still with me? Good. Because as if things weren't getting nutty enough, the movie decides to have John and Laura fall in love. Deep, deep love. How do the principals come to this conclusion? After attending a double funeral, John and Laura take a walk in the woods. Pacing around with the urgency of two people needing to find a bathroom, John and Laura suddenly declare that they can't stop thinking about each other.

"This is highly unprofessional!" John declares. "I'm supposed to be catching a killer!"

"I don't have time for this!" Laura gasps between sobs. "I'm completely out of control!"

Then our two smitten kittens make whoopskie and wax philosophical about how one minute "you're doing OK" and the next minute Mr. or Ms. Perfect waltzes into your life and suddenly you're happy and complete and your food tastes better and the sun shines brighter and you vomit up flowers etc., etc. 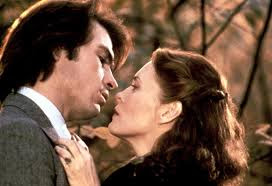 
Established now as cuddlemates, John and Laura plan on living happily ever after that ding-dang slasher is caught. Sure enough, the police suddenly announce they have ample evidence that points to Tommy (the twitchy Brad Dourf) as the trouble maker. Who is Tommy? He's Laura's ex-con of a personal driver, did I forget to mention that? Of course, knowledgeable bad movie fans understand that the Tommy revelation will lead to a police chase, which will lead to a shoot-out, which will lead to Tommy's death. Bad movie fans also know the movie is nowhere near finished.

Once the presumed killer is (allegedly) out of commission, John announces to Laura, "I want to take you away from here!" So she begins packing her bags when--oh no!--Dunaway has one of those gruesome visions from the killer's POV! How could that happen if the killer's dead?! In fact, he's in Laura's building! He's banging on her front door! Laura screams for him to go away! Then, CRASH! The maniac throws himself through the sliding glass doors on Laura's balcony!

No, wait! It's not the killer! It's John! Laura throws herself into his arms, sobbing hysterically. John tries to console her, insisting that Tommy is dead. When Laura asks why Tommy had it in for her, John explains that Tommy thought her work trivialized death. "Death is sacred," John says. Then the detective launches into a monologue about Tommy's sordid life. See, his mother ("a hysterical woman") was a hooker who left her son without clean underwear while she plied her trade on street corners. One day Tommy's dad came home and "upset by the state of the child", slit the mother's throat.

"I watched the blood turn to the color of your hair," John reveals.

Oh, no! Gasp! Shock! Horror! John is the killer! And he's got multiple personalities! The most dominant of these personalities tells Laura, "I don't know what you see in that SOB"--and then proceeds to catalog all of John's short-comings, which include forgetting to pay the light bill, neglecting to answer Christmas cards and failing to finish his college dissertation even though he's been at it for three years. 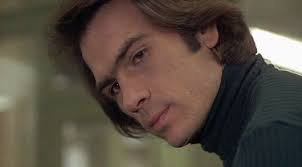 One of the many faces (or personalities?) of Det. John Neville.

Then Jones fixes Dunaway with a look and announces, "I'm the one you want."

Well, Laura is so dumbfounded by John's revelations that she can only bug her eyes in astonishment. Then John (or one of John's personalities) peeks out and asks Dunway to kill him. She refuses, so he pulls the trigger himself. When we last see Laura Mars, she's numbly dialing the police and repeating over and over again, "He loved me, he really loved me..."

There is an old saying that goes like this: "No matter how much lipstick you put on a pig, it's still a pig."

Vampira takes up photography? Troubled shutter-bug Laura Mars (Faye Dunaway) on the set of her latest for her latest fashion spread.

In the case of "Laura Mars", one could easily say: "No matter how much lipstick the filmmakers put on this turkey, it's still a turkey."

Consider this: The budget for "Laura Mars" was impressive; John Carpenter of "Halloween" fame co-wrote the script; A-lister Jon Peters produced; an Oscar winner had the lead; a future Oscar winner was the co-star; fancy-pants photographer Helmut Newton supplied the film's still photos and Barbra Streisand warbled the title tune. Does all this mean "The Eyes of Laura Mars" couldn't possibly be a turkey? Of course not!

As I have frequently mentioned throughout this blog, Junk Cinema isn't only produced by incompetent amateurs with little or no money, talent, taste or experience--although it helps. Supposedly seasoned professionals are just as capable of stuffing a cinematic turkey that will delight bad movie fans for years to come.

In the case of "Laura Mars", the linchpin is Faye Dunaway's bug-eyed scenery chewing. Simply put, Dunaway is either screaming hysterically, sobbing copiously or staring dumbfounded into space as if someone had smacked her in the back of the head with a skillet. Hard. Many times. Meanwhile, co-stars Julia, Dourf and Auberjonois appear to be in competition to see who can portray the most over-the-top stereotype of a rotten ex-husband, twitchy ex-con and flamboyant fashionista, respectively. Real life models Lisa Taylor and Darlanne Fluegel play Laura's favorite mannequins, with predictably wooden results. Only Tommy Lee Jones manages to hold on to his dignity--but just barely.

Back in 1969, Dunaway made a movie titled "A Place for Lovers" opposite Marcello Mastroianni. Robert Greenspun of the New York Times was to write that he "sincerely hope(d) 'A Place for Lovers' will be the worst movie" of Faye's career. No such luck. Besides "A Place for Lovers" (and "The Eyes of Laura Mars"), Dunaway would appear in "The Champ", "Mommy Dearest", "Super Girl", "The Wicked Lady", "Don Juan De Marco", "The Temp", "The Arrangement", "The Hand Maid's Tale", "Beverly Hills Madame" and "The Happening". All of these films helped scuttle a very promising career before (and after) "Mommy Dearest" blew it to bits. No doubt, Dunaway is a talented lady, and when one contemplates her long line of impressive stinkers, you can't help thinking, "What a pro."

The "Eyes" Have It: This movie stinks!

Therefore movie lovers, please always remember, there a cheap turkeys and there are expensive turkeys, but they all gobble just the same. Happy Holidays and Save The Movies!