A Special Post: Ammon Bundy Will You Please Go Now!

Special Note: As a proud, life-long native Oregonian, whose family homestead in Oregon before Oregon was even a state, the standoff at the Malheur Wildlife Refuge is an outrage. With a tip of the hat to Dr. Seuss' Marvin K. Mooney Will You Please Go Now! (all rights reserved), and with a few minor changes, I present...

The time has come.

The time is now.

I don't care how.

You can go by foot.

You can go by cow.

You can go on skates.

You can go on skis.

You can go in a hat.

You can go on a Zike-Bike if you like.

If you like you can go in an old blue shoe.

Ammon Bundy, I don't care how.

You can go on stilts.

You can go by fish.

You can go by Crunk-Car if you wish.

If you wish you may go by lion's tail.

Or stamp yourself and go by mail.

Ammon Bundy! Don't you know the time has come to go. GO, GO!

Get on your way!

You can go by balloon...or broomstick.

Or you can go by camel in a bureau drawer.

You can go by Bumble Boat...or jet.

I don't care how you go. Just GET!

Get yourself a Ga-Zoom: you can go with a BOOM!

Ammon Bundy! I don't care HOW,

Sisters Are Doin' It For Themselves In "Racket Girls" 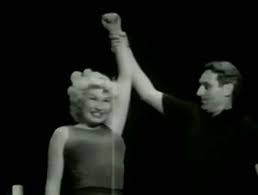 "That is why the lady is a champ!" Peaches Page, star of "Racket Girls", savors her victory in the ring.

Today we turn our cinematic attention to the glamorous (?) world of professional women's wrestling and its fight to stay pure. Written and directed by Robert C. Dertano and produced by George Weiss, put your hands together for "Racket Girls" (aka "Blonde Pick-Up" aka "Pin Down Girls" 1951)!

Our proto-feminist heroine is Peaches Page (yes, that's her real name), a tall, blonde, buxom gal the movie bragged was "the most exciting body in Hollywood." Peaches wants to be a wrestling champ like her idol Clara Mortensen (who also plays herself). "Racket Girls" is her story. Actually, it's a highly fictionalized version of Peaches' story. Well, it's a story, let's put it that way.

After seeing Peaches defeat her latest opponent in the ring, promoter and ladies gym owner Umberto Scalli (B-movie regular Timothy Farrell) purchases her contract. Ms. Page is undoubtedly thrilled, especially after Scalli promises to make her a star. In pursuit of this fine goal, "Racket Girls" devotes plenty of screen time to Peaches jogging, bouncing a ball, working out on a rowing machine, getting a rub down and even wrestling.

In fact, Peaches is so immersed in her work outs that she fails to notice that Scalli's gym is actually a front for gambling and horse race fixing. Peaches also might not notice this because she's kinda dim. Nice, but dim. 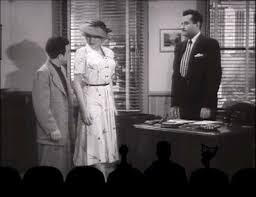 "Is it hot in here or is it just me?" Mr. Scalli (Timothy Farrell) and side-kick Joe (Don Ferrara) check out their newest property, Peaches Page.

Helping Scalli carry out his dirty deeds is the short and smarmy Joe (Don Ferrara). Joe is always ogling the girls in the gym and he takes a special interest in Peaches. After Joe complains that women don't take him seriously because he's small, Peaches reassures him, "Good things come in small packages."

"Not to my way of thinking," he parries back, looking directly at Peaches' chest.

Other nefarious characters hanging around the edges of this flick include Monk (Paul Merton), a coke-eyed bookkeeper who is spying on Scalli for a certain "Mr. Big". Mr. Big, you see, is the head of an all powerful crime syndicate. He's always filmed with his back to the camera, which is suppose to enhance his "bigness", I guess. Anyway, Mr. Big has been squeezing Scalli for a piece of his action--as well as making sure Scalli doesn't knuckle under to the subpoena-waiving feds who are investigating local organized crime.

Then there is Jackie (Mary Jean Walker). She's a tough talking female bookie in Scalli's employ. Monk, that baddie, is blackmailing Jackie (when he's not spying on Scalli). Why? Seems Monk's discovered that Jackie "buckets" (skims money) off the debts she collects for Scalli. Jackie has gotten so good at this, she's moved from "a cheap hotel room" into "a swanky new apartment." When Jackie refuses to share her ill-gotten gains with Monk (whom she calls "a sewer rat"), he tattles the tale to Scalli. This info makes Scalli so mad  he gives Jackie just 24-hours to leave town, or, he hollers, "I'll have you beaten up!"

As Peaches becomes more entrenched in Scalli's world, he begins to make romantic overtures to her. This upsets gym manager (and former cuddlemate) Ruby (Muriel Gardner). Turns out Scalli had promised to make Ruby a champ, too. Although Scalli failed to deliver--and has cheated on her repeatedly--Ruby can't walk away from the cad. "I use to believe his lies and sometimes I still do..." she sighs. 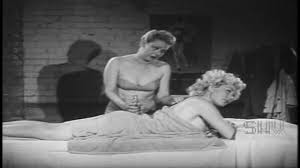 While giving Peaches a rub down, Ruby relates a tale (which becomes a flashback) about an unfortunate gal named Beverly. It goes like this:

Beverly is also taking certain unspecified "pills" that Scalli supplies her. These "pills" have become rather spendy and Scalli frets that he might have to cut Beverly off. That makes Bev burst into tears. When Scalli asks if her folks can help her out, Beverly sobs, "Would you call a drunken father and mother folks?"

Ever the gentleman, Scalli tells Beverly about a friend of his named Mr. Gomez. He's a "businessman" who runs a "cabaret". Sometimes his patrons "drop in without a date" and Mr. Gomez has female employees who "act as hostesses" to make the men "feel at home." 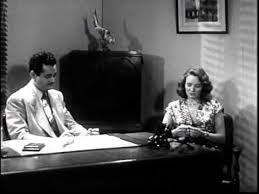 Sob Sister: Scalli makes an offer the down on her luck Beverly can't refuse.

A prostitute? Hooker? Street walker? Doxie? Whore? Bev never utters any of these terms, but it's crystal clear that's the job Scalli is pushing her into--and poor, parent-less, pill-popping Bev agrees to it!

The moral of Ruby's story? Mr. Scalli "is the sort of guy who can change a girl's nightly stroll from a recreation to an occupation."

Unfortunately, Ruby's warning fails to be absorbed into the piece of ground round between her ears that Peaches calls a brain.

In the mean time, Scalli is feeling the pressure from all side: Mr. Big, who wants a piece of his gambling action; the feds, who want him to testify a public hearing; and female wrestling champ Clare Mortenson, who refuses to accept Scalli's "business deal."

"How would you like to throw your bout to Rita Martinez?" the craven creep queries Mortenson. "I could make it very interesting, say, a thousand dollars?" 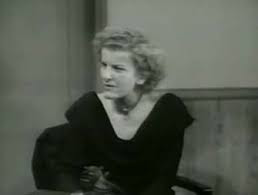 Champ Clare is shocked, shocked! that anyone would suggest she would throw a match for money. "Wrestling is one of the few remaining clean sports," Clare lectures Scalli. "And those of us who make our living at it intend to keep it that way!"

Mortenson then storms off in search of Peaches. She finds the dim wrestler applying her lipstick in the locker room--and promptly orders her to clear out her locker and quit Scalli's gym pronto.

"This place is a hot box!" Clare announces.

When Peaches worries about her contract, Clare replies "I know what I'd tell Mr. Scalli to do with it!"

"You don't seem to like Mr. Scalli very much," the deeply dumb Peaches observes. 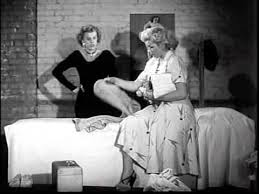 "I hope he dies with a fish bone stuck in his throat!" Clare snaps as she hustles Peaches out of harm's way.

As it turns out, Mr. Scalli does die--but from bullets, not fish bones. See, both the feds and Mr. Big catch up to Scalli. After being forced to testify in a grand jury hearing (which appears to take place in a broom closet with an American flag pinned to the wall), Mr. Big's goons gun both he and Joe down.

As for Peaches, we have no idea what happens to her. With Scalli's death, "Racket Girls" ends its broadcast day. Peaches never made another movie, which was probably a wise choice: as an actress, Peaches was a good wrestler.

As befitting a truly unique Junk Gem, "Racket Girls" appears to suffer from a personality disorder. On the one hand, it wants to be seen as a serious examination of professional women's sports. That's why it features Clare Mortenson and Rita Martinez (the female wrestling champ of Mexico) as straight shooting professionals who want to keep their sport clean. However, to ensure that there would be a (male) audience for the picture, "Racket Girls" promoted itself with a lurid ad campaign that promised to show (male) patrons "the strange love life of a wrestling gal!" and "intimate scenes of gorgeous girl wrestlers with the naked eye of the camera!" 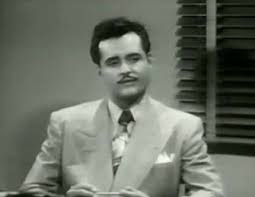 "Racket Girls" promotional trailer was even more over the top, screaming that women's wrestling was "fierce yet feminine" and promised to show (male) viewers "what happens when the cruel lords of the underworld try to make gorgeous gals of the ring their slaves!"

Of course, the 1950's were hardly an enlightened era for women's rights or women's sports. Thanks to Title X, girls can now play any sport they want in school and college. Therefore, "Racket Girls" serves as an important reminder of how hard female athletes have had to work to be taken seriously. In her own blinkered way, Peaches Page helped pave the way for more equality in sports. Wherever she is, I hope she's proud.

Until next time, always keep your gym togs handy, and SAVE THE MOVIES!