It's The Walking Dead! It's A Zombie Nightmare! It's "Voodoo Man"! 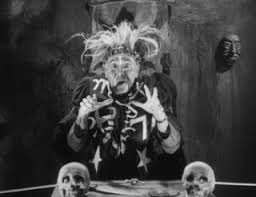 "The Voodoo That You Do So Well": George Zucco as voodoo priest/practitioner Nicholas in "Voodoo Man".

Say, do you want to bring a loved one back from the dead?

But are you finding it difficult to accomplish this goal?

After striking a deal with the gods on Mt. Olympus or reanimating the corpse with electricity fails to do the trick, have you considered voodoo? 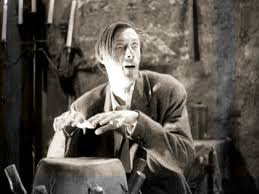 See, Dr. Richard Marlowe wants to bring his wife Evelyn back from the dead and he swears by voodoo! In fact, with the help of his friend Nicholas and a mystical ceremony that combines pounding drums and rope tricks, Mr. Marlowe has brought his wife back to the land of the living...for about five minutes. Of course, the good doctor's tries have also left three unwilling female motorists in a perpetual zombie stupor...but, hey, you can't make an omelet without breaking some eggs, right?

"Voodoo Man" is a 1944 Monogram Pictures release that has everything EVERYTHING! a hack horror fan could possibly want: a mad scientist; kooky assistants; a creepy old house; a wither up prune for a housekeeper; an inept, cranky sheriff; a dumb-as-dirt deputy; gals in white nighties stumbling around in the dark and Bela Lugosi.

Furthermore, as an added bonus, "Voodoo Man" is directed by the legendary William "One Shot" Beaudine, a man famed for rarely shooting a second take of anything.

"Voodoo Man" actually begins in Hollywood, at the famed "Banner Productions" compound. That's where up and coming screen writer Ralph Dawson (Tod Andrews) is asked by studio head S.K. if a local item about missing female motorists might have the makings for a good horror picture. Ralph, who is preparing to marry Betty (Wanda McKay) shortly, begs off the assignment. Instead, S.K. considers giving it to that kid Billy Wilder or maybe that Mankowitz fellow. 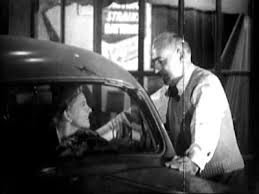 While driving to his fiance' Betty's home, Ralph stops at a gas station for a fill-up. The goofy attendant, however, is so set on checking the air in Ralph's tires and trying to sell him car polish that a miffed Ralph leaves before the fuel is pumped into his gas tank. Naturally, his car conks out. Luckily, another motorist appears on the horizon and offers to give Ralph a lift. This turns out to be Stella (Louise Currie), who is both Betty's cousin and her maid-of-honor. The soon-to-be relatives are driving pleasantly down the road when Stella's car suddenly conks out. How could that be? Possibly because Bela used some futuristic electronic juicer to mess with Louise's car engine, as that Nicholas fellow alerted Bela that Stella might be a good voodoo subject.  With the auto stalled, Ralph hikes up to a nearby house to use their phone while poor Stella is snatched by Bela's goons, Toby and Grego.

Stella is imprisoned at Bela's dark, creepy house, where he introduces her to his wife Evelyn. Bela explains that the Mrs. is "dead", but only in the conventional sense of the term. See, thanks to voodoo, the "life essence" one gal can be transferred into Evelyn and thus bring her back to life. Dr. Marlowe has been on a constant search for the perfect subject to supply this "life essence", which explains A) the kidnappings (nobody would just up and volunteer their "life essence", after all) and B) why there are three gals in a perpetual zombie stupor hanging around Bela's place.

While Nicholas dons a feathered head dress and paints white marks on his face, Toby lights candles and then brings in the zombie girls into Bela's basement. Evelyn and Stella are settled into two arm chairs facing each other. Bela, who wears a robe festooned with numbers, stars and hand prints, begins mumbling some mumbo-jumbo while Toby and Grego pound on some drums. Meanwhile, Nicholas is performing rope tricks you may want to keep an eye on in case you have to entertain your bratty nephew for a couple of hours and you run out of things to do.

Slowly but surely Evelyn comes back to life, but only for about five minutes and then she returns to her zombie state. D'oh! Poor Stella, on the other hand, having had her "life essence" sucked out of her, is now a zombie, too. Oh, well, back to the drawing board!

Eventually Ralph makes it to Betty's house, but he's fit to be tied. He believes Stella ditched him in some sort of pre-wedding prank and he's out for revenge. However, when fiance' Betty informs him that her cousin/maid-of-honor has yet to arrive, Ralph becomes uneasy. Hours pass and there is still no sign of Stella. On the urging of Betty's mom, the cuddlemates visit the sheriff's office to make a missing person's report. Unfortunately, the local sheriff (Henry Hull) is a cranky old coot who spends more time complaining about people and their petty criminal matters than he does solving these petty criminal matters. His dumb-as-dirt deputy Elmer (Don White) is little help: he spends most of his time napping and worrying that his "old lady" will end their marriage if he doesn't come home on time. 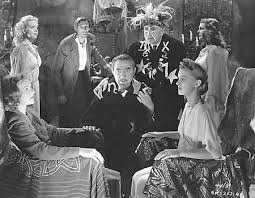 Lights, camera, voodoo! Dr. Marlowe (Bela Lugosi, center) tries to revive wife Evelyn (on the right) with the "life essence" of Stella (on the left). It doesn't work.

Because they have nothing better to do, the sheriff and Elmer do go over to Dr. Marlowe's house to poke around a bit. While the doctor and the sheriff are enjoying a glass of sherry and discussing inconsequentials, Stella manages to escape from her zombie prison and wander around the country side. Their discussion having achieved nothing, the good doctor bids the sheriff goodbye. While Elmer and the sheriff are driving home, who should they discover but Stella, dressed in a flowing white nightie, stumbling around in a dead-eyed trance. "Gosh all fish hooks!" the sheriff cries (in one of my favorite catch-phrases of all time). The men stuff Stella in their squad car and cart her back to Betty's house. There the poor gal lays in bed, stiff as a board. confounding her family as to what exactly is wrong with her.

Unfortunately, Stella doesn't stay there for very long. See, that crafty Dr. Marlowe (with the aid of Toby) finds out where Stella has wandered off to. He then bamboozles his way into Betty's house as the doctor sent to check on the patient. Later that evening, Bela and his voodoo posse pound drums and chant mumbo-jumbo that force Stella to sneak out of her cousin's house and back to Bela's place. What's more, Dr. Marlowe has decided that bride-to-be Betty is the perfect subject to revive wife Evelyn. Thus, he puts Betty under some voodoo trance that forces her to drive over the Bela's creepy house. Once there, Betty will take her place in the arm chair facing Evelyn and have her "life essence" sucked out.

With the tension screws tightening every second, "Voodoo Man" comes to its stirring conclusion. Just when it looks as if poor Betty will never be a bride (and poor Stella will always be a bridesmaid), Ralph and the sheriff burst into Bela's basement and halt the ceremony. Shots are fired and punches are thrown and poor Bela is soon gushing blood. Having disrupted the voodoo proceedings before all of Betty's "life essence" has been transferred to her, Evelyn drops dead, this time for good. Bela soon joins her, crying, "At least now we can be together at last!" Meanwhile, all the gals kidnapped by Bela have finally been freed from their zombie states. With no time to lose, the sheriff arrests all of Dr. Marlowe's evil helpers and Ralph ushers Betty and Stella to the safety of home.

When we next see Ralph and Betty, they are married and preparing to take their honeymoon. However, before they go, hubby Ralph presents studio head S.K. with a treatment for a movie titled "Voodoo Man". When his boss asks who should play the lead, Ralph suggests that Bela Lugosi would be an ideal choice. It's a switcheroo, get it?!

Coming in at just 62 minutes, "Voodoo Man" was Bela Lugosi's last film for Monogram Pictures. He completed nine films for the famous low-budget studio, appearing in stuff like "Return Of The Ape Man." As the refined but evil Mr. Marlowe, Bela actually is in his element and performs much better than in his Ed Wood movies, where the ravages of old age, drug abuse and heart ache had made him a very fragile man indeed. 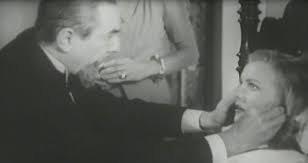 Shot over the course of seven days, "Voodoo Man" is a harmless little picture that provides a treasure trove of Junk Cinema goodies. Besides the casting of Lugosi, "Voodoo Man" is an excellent introduction to the directing skills of William "One Shot" Beaudine. A nominee for The Worst Director Of All Time by The Golden Turkey Awards (he lost out to Ed Wood), William was notorious for rarely shooting a second take of  anything. That was evident in our feature presentation, where John Carradine is seen burning his finger with a match during Stella's "life essence" transferring scene. During this pivotal plot point,  you suddenly see Carradine waiving his hand and stomping his foot, like he was having a mild seizure. Any other director would have called "Cut!", but not Beaudine, who kept the camera rolling as if nothing out of the ordinary had happened.

Beaudine began his career in silent films and he never bothered adapt his style to the demands of sound. Therefore, his actors often roll their eyes and flay about like stock characters in some improbable melodrama. Eventually racking up 150 movie credits to his name, Beaudine gave us "The Blonde Comet" (1943), "What A Man!" (1944), "Black Market Babies" (1945) and "Billy The Kid Versus Dracula" (1966), among other titles. Perhaps his most famous picture is "Mom and Dad", the notorious 1944 flick which dared to show a live birth on screen as well as presenting "fearless hygiene commentators" who sold safe-sex manuals during intermission.

Another interesting fact about "Voodoo Man" is the casting of Wanda McKay as bride-to-be-Betty. Born Dorothy Quackenbush in Portland, Oregon, Wanda became a top model and later began appearing in B-movies in the 1940's. While watching the flick, I knew I had seen her before, but I couldn't figure out where. Then it hit me: I had seen a clip of the film "Because Of  Eve" showcased in the under-appreciated documentary "It Came From Hollywood". In the featured snippet, Wanda and her husband visit a kindly doctor who cheerfully informs them they "are as sound as a new dollar bill." He then reveals (unknown to her movie husband) that Wanda has had a baby and the husband (unknown to his movie wife Wanda) has had VD. McKay is so horrified that her screen hubby had VD that she calls off their marriage and announces, "And now I'm going out into the clean, fresh air!" Her jilted husband turns to the doctor and goes, "Well, there goes my happy marriage", to which the kindly doctor says he's sorry.

I love movies like "Voodoo Man" because they are made by earnest but marginally-talented professionals. The acting is bad, the writing is even worse and the sets feature doors that stick and windows that slam shut on their own. Yet everybody on screen is giving it the old college try, doing the best they can. You can question these people's talent, even their sanity, but not their professionalism.

So, until next time, always make sure your gas tank is full, and SAVE THE MOVIES!