A "Flashdance" In The Pan 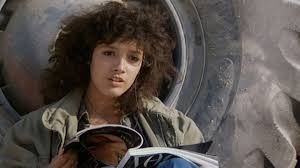 "Who's That Girl?": Jennifer Beals (as Alex) flips through Vogue magazine. After what "Flashdance" did for her career (hint: nothing) she'd be better off checking the help-wanted ads.

When the movie "Flashdance" was released in 1983, it was a box office and pop-culture sensation. The story of a Pittsburgh welder who dreams of attending a famous, snooty dance academy, "Flashdance" was hailed as one of the first films directly influenced by MTV. Indeed, it's success spawned a clutch of musicals (like "Footloose" and "Shout") that employed the quick cuts, montages, smoke and mirrors so beloved by the music videos of the day. That quick editing, fog and strobe lighting also hid the fact that dancing doubles were often employed to cover-up for stars cursed with two left feet.

That was certainly the case for Jennifer Beals, the Ivy League student/part-time model who was cast as the lead, Alex. Most of her dancing was done by the uncredited Marine Jahan, although the flick's original publicity had hinted otherwise.

"Flashdance" also inspired a fashion craze for "designer sweat pants" and torn and/or off-the-shoulder tops for women. Even more incredible, the flick's theme song ("What A Feeling", written and sung by Irene Cara of "Fame" fame) went on to win the Oscar for Best Original Song. Yeech!

The unexpected success of "Flashdance" blinded a lot of movie goers to the fact the flick was horribly, laughably bad. In fact, certain scenes, played with poker-faced seriousness by the on- screen participants, are so nutty that you could shoot whole popcorn kernels through your nose from laughing. 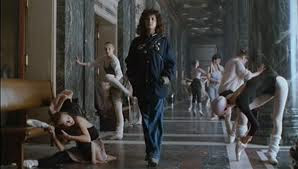 Scruffy Alex yearns to leave flashdancing behind and become a ballerina.

Therefore, to celebrate "Flashdance"s 33rd anniversary (or birthday, if you prefer), let's take a long, loving look at what made this musical monstrosity the crack-pot classic it is today.

Home Alone--Star/heroine Jennifer Beals is Alex Owens. She lives is a spacious loft apartment and appears to have no family. Her dancing skills appear to be divinely inspired, because she never mentions ever attending a dance class in her life. Even Fred Astaire went to dancing school, for pete's sake.

Workin' For A Livin'--Our featured film expects us to believe that Alex is a welder in the Pittsburgh steel mills. Welding is a very demanding job that requires a specific kind of training and education. Alex, who is suppose to be in her late teens or early 20's, is clearly too young to have acquired this knowledge--unless she was the prize student at Pine City Vo-Tech or something. Furthermore, welding is a union job and should provide Alex with a nice paycheck. So why is she moonlighting as a dancer at Mawbry's, the supposedly "blue collar" bar where she performs?

Gotta Dance!--As noted above, Alex welds by day and dances by night. How is this so? Alex must at least put in an 8-hour shift welding. Therefore, where does she find the time to conceive, choreograph and rehearse her dance numbers? And work out the lighting cues, music and costume requirements? Come to think of it, "Flashdance" never tells us how many days a week Alex dances at Mawby's. Is it just on weekends? Is she required to come up with a new dance every week or every month? Do the bosses at Mawbry's preview her dances before she's allowed to perform before the patrons? And since Alex has apparently never set foot in a dance class, where does she get her ideas and how does she know how to execute them properly?

Gotta Dance! Part 2--The dances that Alex and the gals regularly perform are laughably too complex for the supposedly blue collar crowd they entertain. They are more like Las Vegas set pieces. In her number "He's A Dream", for instance, Alex employs stark lighting, several props, a costume change and a shower of water as part of her routine. How many working class watering holes provide their dancers with such amenities? The hoofers at Mawbry's must totally be dedicated to their art, considering that the beer drinking lugs in the audience would be fine if they just shimmied to Def Leopard's "Pour Some Sugar On Me" and left the artsy stuff to those "Solid Gold" dancers on TV. 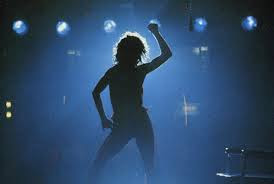 Shakin' what her mother gave her: Alex on stage at Mawbry's

"I'm Not A Stripper. I Just Wear Pasties And A G-String."--"Flashdance" wants us to know that Alex may dance at a bar and she may rip off her costume to reveal skimpy attire, but she's not a stripper! She's a dancer! A real dancer!  Never once do we see a gentleman slip a dollar bill into her g-string because, well, Alex is just not that  kind of a girl! Down the street from Mawbry's is another, sleazier bar called Zanzibar where the females bumping and grinding for the male customers are strippers. In fact, when Alex learns that her best gal pal Jeanie (Sunny Johnson) is now "performing" there after her audition for The Ice Capades ends in disaster, she's horrified. How horrified? So horrified that Alex rushes over to the sin pit in question, pulls Jeanie off stage, throws a rain coat over her shoulders and screams, "Do you think that's dancing!?"

However, is there really much difference? If some of the other dancers' costumes at Mawbry's had more material, they's qualify as bikinis. And part of Alex's "allure" (especially for her boss, which we'll get to later) is that she's scruffy at work, but sexy on stage. If Alex spent her weekends dancing "Swan Lake" at the local opera house instead of bumping and grinding at Mawbry's, this "dichotomy" about her public and private selves might have more heft. Instead, "Flashdance" just wants to have it both ways, allowing their film to be both critical and exploitative at the same time.

May I Have This Flashdance?--One night while Alex is dancing away, her hunky boss Nick Hurley (Michael Nouri) is in the audience. He's been brought there by another employee to show what one of his scruffy welders gets up to in the evenings. Nick is suitably impressed and asks Alex out for a date. She demures because he is, after all, her boss. However, Nick is not easily put off: "Okay, you're fired," he replies. "Pick you up at eight."

This leads to another uproarious scene, where Alex, dressed in a tuxedo, gobbles a fancy dinner while caressing Nick's crotch with her foot and asking him if he's ever had sex in a phone booth. (Fun Fact: the director of this film, Adrian Lyne, would later give the world "Fatal Attraction". That's the flick where the crazy Glenn Close asks Michael Douglas, "Ever done it in an elevator?" Merely a coincidence or is Mr. Lyne inadvertently revealing a bit of personal info about himself? You decide.) Who should then canter up but Nick's snippy ex-wife, who declares, "You two look cozy", before turning to Alex and asking, "You're not really a welder, are you?" Alex, of course, is not easily put off by bitchy society gals. In fact, she proudly reveals to Nouri's ex that she "f@%!ed (Nick's) brains out" on their first date. 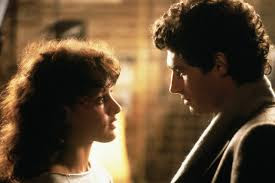 
Of course, despite their differences in age and social status, Alex and Nick FALL MADLY IN LOVE because, well, what else are they going to do? I doubt they get married, but I'm sure they have some fun for a while.

Think Of What It Means To Be A Swan...Alex dreams of studying at the elite Pittsburgh  Conservatory of Dance and Repertory and she's encouraged by Hanna Long (Lilia Skala), an elderly Russian ballerina. How did these two meet? How long have they known each other? The movie never tells us. I doubt the elegant Hanna has seen Alex do her thing at Mawbry's and, if she did, the frail European lady would probably have a stroke. Like so many things in this flick, the relationship of Alex and her mentor is never fully explored to a satisfying or realistic degree. No doubt Hanna is just a by-the-numbers plot point inserted to inspire Alex when the chips are down.

If the name Lilia Skala sounds familiar, it should: she earned a Best Supporting Actress Oscar nomination for the 1963 film "Lilies of the Field". She's the only real talent (and touch of class) in the film. And she's Austrian, not Russian.

What A Feeling!--After poor Hanna dies, Alex finally gets up the nerve to audition at the snooty dance academy. But Alex being Alex, she refuses to bend to the common notions of what a ballerina should look or dance like. Thus, our heroine shows up at her all important audition in a short, black get-up and boogies to "What A Feeling". Alex also tosses in some break dancing moves, which appear to be handled by a very skinny boy body double. The auditioners are duly impressed and Alex is in. Hunky Nick meets her outside the academy with a bunch of roses. The rest is box office history.

"Flashdance" made both buckets of cash and Jennifer Beals a star--for a while. Her next film was "The Bride", a quasi-remake of "The Bride of Frankenstein" co-starring Sting. That movie was a flop, but it wasn't Jennifer's fault; Sting was so self-important and hammy, the movie sank under the weight of his ego. From then on, Beals would appear infrequently on TV and in independent movies and has always, to her credit, refused to appear in a "Flashdance" sequel or remake. 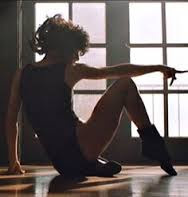 Is it Jennifer Beals? Marine Jahan? Or the male body double? You decide.

What is the moral of this story? Only the public can truly make a star.

So, until next time movie lovers, please remember that only Marlon Brando ever looked good in a torn T-shirt, and SAVE THE MOVIES!

Update--An alert reader has informed me that Alex's home is Pittsburgh, not Philly. Sorry for the mistake! It has been corrected!