Let's All Visit The "Carnival Of Souls"! 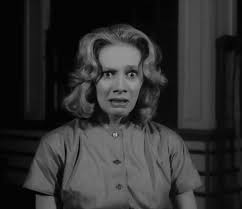 Actress Candice Hilligoss cringes in horror after watching her feature film debut as Mary in "Carnival of Souls."

Question: What cost $33,000 bucks to make, was shot in a a couple of weeks, was screened on a double bill with "The Devil's Messenger" AND may be the most influential film EVER lensed (partially) in Lawrence, Kansas?

It's the crack-pot creeper "Carnival Of Souls"(1962), the ONLY film to date EVER directed by a guy named Herk.

However, before we delve into the murky depths of the movie, please be aware that "Carnival of Souls" has reached the status of a "cult classic". When it was re-released in 1989, it was met with general critical acclaim. Furthermore, directors David Lynch and George A. Romero have both cited our featured flick as a major influence on their particular oeuvre. 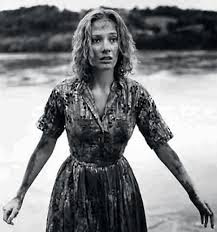 "Anybody got a towel?" The stunned Mary staggers out of the drink.

Which is perfectly fine. Many low budget movies--like "Cat Woman" and "DOA"--have, with the passage of time, proven themselves to be cinematic works of imagination and innovation.

Yet, in my esteemed opinion (and because this is my blog, I can call my opinion "esteemed" if I want to!) "Carnival Of Souls" remains--irregardless of critical re-appraisal-- a goofy, often static, fitfully acted tale about a chick with a bouffant hair-do who staggers around as if she was accidentally injected with a mega dose of elephant tranquilizer.

Things begin thusly: Mary (Candice Hilligoss) and her gal pals foolishly accept a drag racing challenge from some dudes in straw hats. As they trundle across a rickety bridge, the cars bump and the vehicle carrying the girls plunges into to the muddy, sandy river below--don't you hate it when that happens? While the police and assorted old coots in bib over-alls dredge the river to find the downed car, up pops Mary. She's dazed and confused and covered in muck, but she's alive. How did she survive the crash? Don't ask Mary--she's just as perplexed as everyone else.

Three days later, Mary is heading off to her new job as a church organist in the party state of Utah. While driving into town, she she passes by an abandoned carnival site that exerts a strange and strong attraction for her. In a way, that's understandable, because the broken down pavilion is more life-like (and a better performer) than most of the human cast. 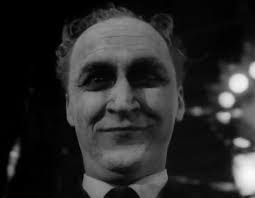 "May I help you?" Director Herk Harvey as "The Man".

Mary settles into a rooming house run by an Aunt Bea-ish type spinster (Frances Feist), who seems unusually proud that all her rooms all come with baths. The only other boarder is an oily, creepy rake named John (Sidney Berger), who relentlessly hits on Mary. Oh, and there is this pasty-faced guy in a suite (director Herk Harvey himself) who has a weird habit of sneaking up on Mary and scaring the hell out of her. Wonder what he wants.

As "Carnival of Souls" progresses, poor Mary becomes increasingly unhinged by a series of strange interludes. For example, while shopping for a new dress, it appears people can neither see nor hear her. Next, she loses her accompanist job for freaking out on the organ and playing "profane" music. Prowling around the deserted carnival, Mary finds a bunch of pasty-faced ghouls dancing up a storm. Desperate to get out of town, she hops on a Greyhound bus and finds it crammed with grinning, white-faced ghouls. Speaking to a sympathetic doctor, Mary wonders if these encounters mean "she's not suppose to be here" and if she's trapped between the realm of the living and the dead--a common occurrence to visitors to Utah, I am told.

Finally, our beleaguered heroine goes back to the carnival, where the ghouls are still cutting a rug. Once the music stops, they chase Mary en masse onto a deserted strip of beach and pig pile on top of her. Not good, if you ask me.

"Carnival of Souls" quickly wraps up (it's only 82 minutes long) with rescue workers still trying to locate that downed car. This time, however, they hit pay dirt. As they drag the vehicle out of the water, rescue workers find the bodies of all three passengers, including--gasp!--Mary.

As organ music carries us up and out of "Carnival of Souls", we, the viewers, are left to ponder these questions:

"The Gangs All Here!" Mary encounters some other worldly passengers when she hops a bus out of town.

A) Was Mary trapped between the living and the dead? My guess is yes.

B) Was that pasty-faced guy in the suit meant to guide Mary to the great beyond or was he just scaring her for kicks?

C) Is Mary's fellow boarder John a stalker, a pervert, a criminal or a Ted Cruz supporter?

I can acknowledge that "Carnival of Souls" does boast flourishes of innovative film making. The black and white photography, for example, is excellent. The scenes where the ghouls dance at the abandoned carnival is surreally creepy. Director Herk creates a tone of unease lurking below the surface of ho-hum small town life.

Perhaps most importantly, one can see the influence "Carnival of Souls" had on George A. Romero. The freaky ghouls closing in on the hysterical Mary recalls the ravenous zombies converging on the survivors trapped inside the house in "Night of the Living Dead", which was released in 1969. Also, I wonder if "The Man" character inspired "The Tall Man" character (played by Angus Scrim) in those "Phantasm" movies of the late 1970's. 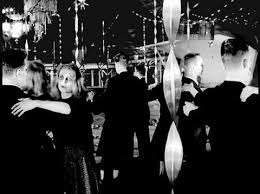 "Shall We Dance?" The ghouls in the after-life trip the light fantastic.

Which, as I noted earlier, is all find and dandy. Film makers find their inspiration in all sorts of places. But let's not get ahead of our selves. The elements I discussed only hint at what "Carnival of Souls" could have been if director Herk had had more time, money and experience. In final analysis, "Carnival of Souls" is a more ambitious and creative bad movie than, say, "Voodoo Man" (reviewed below), but it's still a bad movie--and that's all right with me.

So, until next time movie lovers, leave the drag racing to the professionals, and SAVE THE MOVIES!