William Castle Invites You To "The House On Haunted Hill" 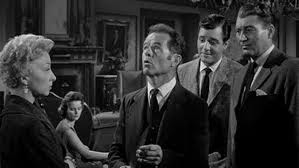 "And that's how I got into commemorative spoon collecting..." Walter Prichard (Elisha Cook, Jr.) introduces himself to the other guests staying at "The House on Haunted Hill."

Say, does this scenario sound kind of familiar to you?

A group of diverse people gather at a house where they will be locked in.

The said people will experience a variety of situations that will (supposedly) test their mettle.

There will be a host to observe and comment on the proceedings. 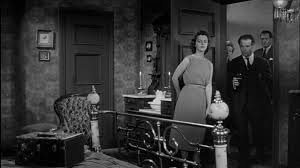 "And this is your room..." Ingenue Nora (Carolyn Craig) doesn't seem happy with her accommodations.

If the participants can hang on until the end, they will receive a nice chunk o'change.

If you are thinking to yourself, "Hey! That sounds just like that rancid reality show 'Big Brother'..." you are half right.

For while it is true that the rancid reality show "Big Brother" features a clutch of folks ensconced in a house where they humiliate and/or debase themselves and/or each other for a cash prize, CBS did not cook up this scenario themselves. No way! That honor belongs to director, producer, idea man and all around huckster William Castle and his 1958 cheaper creeper "The House on Haunted Hill."

Velvet voiced eccentric millionaire Frederick Loren (Vincent Price with Salvador Dali's 'stache) has invited five people to spend the night in a supposedly "haunted house". If they can last until morning, each guest will get a check for ten grand--quite a bit of money in 1958, even after taxes (in case you're interested, $10,000 in 1958 is $83,283.45 in 2016 values). 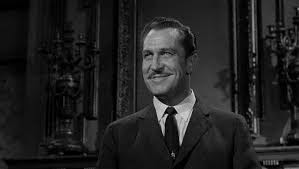 "Allow me to introduce myself": Host and Big Brother Frederick Loren (Vincent Price).

Of course, each of these folks have an underlying reason for taking Mr. Loren up on his rather kooky offer. Lance, for example, is just doing it for kicks. Nora needs the money to help her injured parents. Newspaper columnist Ruth has gambling debts she'd like to pay off. However, Pritchard's motivation is rather vague. See, he actually owns the house Loren is renting for his spooky sleep-over. Moreover, Walter's own brother AND sister-in-law were hacked to death in the said house--by the wife's sister, no less. Finally, in the flick's prologue, Walt states that he had previously attempted to spend the night in the haunted house and nearly DIED in the process. So why tag along? To face his fears? To make peace with the past? Considering what a marathon drinker Walter is, I vote for the free hooch.

Anyway, things get off to a suitably scary start when a huge crystal chandelier nearly crashes down on Nora--who is saved by Lance, naturally. For the rest of the movie, Lance will hit on Nora with varying rates of success. As the guests get acquainted downstairs, viewers are given a peek into Frederick Loren's domestic situation, which is rather spooky itself.

Loren is married to Annabelle (Carol Ohmart), an ice cold blond who wants hubby's money so much she'd kill for it. In fact, Frederick insists Annabelle has already tried to do him in before--with arsenic--although she insists it was merely "something he ate." Later on, Fred offers the Mrs. "one million tax free" if she'd divorce him, but Annabelle sweetly refuses, stating, "I want it all."

Of course, Fred isn't exactly an ideal husband. His first wife ran off and his second and third wives each died of heart attacks, "even though they were in their twenties." Annabelle contends that Fred's jealousy and possessiveness drove away her friends and that Loren is a psychotic, too. When she refuses to participate in hubby's "haunted house party", he yanks her by the hair until she relents. As a parting shot, Frederick tells Annabelle not to fret so much "because it causes wrinkles."

After Frederick welcomes his guests and lays down the ground rules, he suggests Walter give them a tour of the house. Turns out seven people have been offed there in some very icky ways. For instance, a disgruntled husband kicked his wife into a vat of acid for not being enthusiastic enough about his wine making hobby. Skoal! 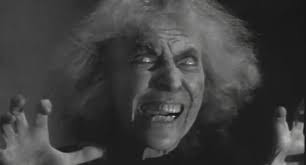 See, tanning does CAUSE wrinkles!

When the group moves on, Lance and Nora hang back. They banter a bit and decide to check out some of the basement rooms on their own. Suddenly Lance falls into a supposedly locked room and poor Nora is confronted by a horrifying specter. Well, actually, the sight of a shriveled up old granny in a fright wig. Being pulled on a skateboard. Wearing a long black nightie. Not exactly a horrifying specter as horrifying specters go, but a reasonable simulation of one. Or not. You make the call.

Never the less, Nora screams bloody murder and runs off to find the other guests. They are gathered in the formal living room knocking a few back--Walter having knocked back more than a few himself. The hysterical typist pleads with the others to follow her into the basement to locate Lance. They find the jet jockey unconscious with a bump on his head, but the ghostly specter of granny is nowhere to be found. Lance can't remember how he got locked in the room or who conked him on the noggin, but, after all, this is a haunted house and those things do tend to happen.

As the evening (and movie) wears on, it's poor, pitiful Nora who keeps getting freaked out. She finds a disembodied head in her over-night bag, for instance. She's the one who discovers the body of Annabelle dangling from a noose. Later on, the body of Annabelle will float outside the gal's bedroom window. Then Nora runs off to the basement, convinced Frederick is trying to kill her. Naturally, by the time Fred catches up with Nora she's as unglued as the only virgin at a prison rodeo--and promptly shoots Loren dead.

After Frederick collapses in a heap, Nora runs off (again), shrieking like a dental drill. Moments later, Dr. Trent appears out of the shadows. Turns out that--gasp!--he and Annabelle are having an affair and-gasp!--conspiring to kill Frederick by--gasp!--driving Nora to the edge so she would--gasp!--shoot Frederick and thus allow them to --gasp!--live happily ever after on the stiff's money. 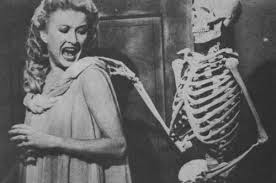 "May I borrow this? I'm kinda cold..." Annabelle is not happy with Dr. Trent's new look.

Unfortunately, everything described above does happen, which is kind of a bummer, especially for Annabelle and Dr. Trent.

In the final moments of "The House on Haunted House", Frederick Loren faces his stunned guests and explains that when he discovered Annabelle and Dr. Trent were conspiring to murder him at his "haunted house party", he decided to "play along", when in fact he was actually conspiring to kill them. He then declares that he's content to let "justice" decide if killing someone who plans on killing you is OK.

A fascinating moral argument, I grant you, but I'm sure all of Loren's guests just wanted to know that they were still getting paid--I know I would.

See, at certain points in the film, large inflatable skeletons were to "emerge" from strategic points in the theater and fly over the heads of unsuspecting patrons, thus adding to the chill factor of the flick. 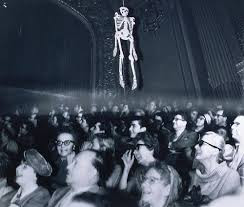 Unfortunately, this novel idea never really panned out the way Castle wanted it to. According to The Golden Turkey Awards (which nominated "Emergo" for "The Most Inane and Unwelcome Technical Advance in Hollywood History" alongside "Percepto" and "Glorious-Smell-O-Vision"), when Will previewed "Emergo" for Allied Artist executives, the skeleton (which weighed 15 pounds) fell off its trolley and smacked chief of studio operation Eugene Arnstein on the head. Later, when "The House on Haunted Hill" was playing in theaters, the skeletons were light weight figures that proved to be irresistible targets for kids with sling-shots. As The Saturday Evening Post  remarked, "Breakage was high."

Mangled plastic skeletons aside, one person watching "The House on Haunted Hill" with great interest was Alfred Hitchcock. After seeing Castle's film get positive reviews and rake in the cash at the box office, "The Master of Suspense" decided to do his own low-budget B&W horror movie, using the crew from his TV show "Alfred Hitchcock Presents". That film was named "Psycho" and the rest is movie history. William Castle, an Alfred Hitchcock fan, was delighted that the director of "Rebecca", "Rear Window", "To Catch a Thief" and "Vertigo" (among other classics) was inspired by his little cheaper creeper to make his own cheaper creeper. It must have made the failure of "Emergo" so much easier to handle.

Therefore movie lovers, remember that inspiration can strike anywhere, and help me SAVE THE MOVIES.