Are You Up For A "Catalina Caper"? 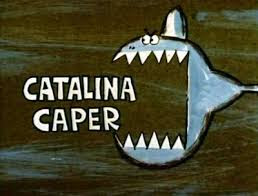 Summer's here, so let's break out the swimsuits, wax down our surf boards and hit the beach! Is everybody ready for a "Catalina Caper"?

Shot in 1965 (but released in 1967), "Catalina Caper" (AKA "Never Steal Anything Wet") is a beach party/romance/comedy/musical/heist flick where Little Richard wails "Scuba Party", Robert Donner (from "Mork and Mindy") does endless pratfalls, super model Cheryl Tieges is an extra and the top billed Tommy Kirk tries to foil an art scam cooked up by a Jack Benny impersonator.

Oh, did I forget to mention that a pre-"Carol Burnett Show" Lyle Waggoner is also on board? Along with a gal who developed an unnatural attraction to a "little fish" she met under water, thus earning the moniker "Creepy Girl" from MST3K's love-sick Tom Servo?

Yes, the writers and producers of "Catalina Caper" enthusiastically stuffed their turkey with everything they could think of. Then they baked their bird until it was golden brown. Once out of the oven, "Catalina Caper" was sliced into turkey hot dogs...which the producers served on a warm summer night at the drive-in...and then ran for cover as patrons en masse puked up their cut-rate product.

The sun! The sea! The stupidity! Extras twist again like they did last summer in "Catalina Caper".

There is a very good reason why "Catalina Caper" is perhaps the most obscure entry in the beach party genre: it's bad! Of course, beach party movies aren't known for their wit or wisdom. Unfortunately, even with the bar already set very low, this concoction of summer love, dumb jokes, forgettable music and art forgery (with a bit of scuba diving on the side) is still a cinematic accident just waiting to happen.

Our featured presentation begins by presenting a chubby burglar in a loud Hawaiian shirt named Laurence (Jim Begg), who easily swipes a "rare Chinese scroll" from a "private museum" somewhere in California. Laurence is part of a trio of would-be criminals headed up by the fey Arthur Duval (Del Moore) and his wife, Anne (Sue Casey). They plan on selling the scroll to a gent named Lakopolous (Lee Dane), a slightly sinister Greek tycoon who cruises around the world on a mammoth yacht and owns a large private island. Hmmm, who could he be based on?

But it's a scam! See, Anne will paint a forgery of the scroll and Arthur will in turn sell it to Lakopolous. Once the trio have their money (and before "their fat Greek pigeon" as Arthur calls him) realizes he's been had, Laurence will return the scroll back to where it came from. The Duvals, you see, are honest thieves. They only dabble in crime to support their lavish lifestyle--which explains why Arthur dresses like Thurston Howell the Third on "Gilligan's Island".

While waiting for the paint to dry on Anne's forgery, the Duvals and Laurence hide out on sunny Catalina Island. Eyeing their activities suspiciously is the Duval's college-age son Tad (the deeply crew-cutted Peter Duryea).

"Dad, why did we come to Catalina?" Tad asks. 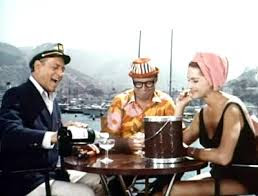 "I'll drink to that!" Arthur Duval, side-kick Laurence and wife Anne take a much needed break from their criminal activities.

"We came to enjoy ourselves," Duval cheerfully replies.

Experience has taught Tad not to believe him: "Whenever you and mother 'come to enjoy yourselves', it means you are mixed up in some shady deal."

Arthur Duval huffily insists the family is "here for a holiday" and besides, what kind of trouble could he and his mother possibly get up to on such a tiny island?

"I don't know," Tad rejoins, "but whatever it is, you and mother are right smack in the middle of it!"

Also converging on Catalina are college buddies Charlie Moss (Brian Cutler) and Don Pringle (Disney kid and teen star Tommy Kirk). Charlie, who sports a pompadour Eraserhead would envy, is presented as a wildly popular ladies man. Indeed, for the entire flick, Charlie is surrounded by an adoring flock of females. 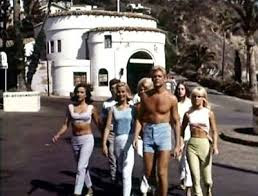 "I'm Sexy And I Know It": Charlie Moss and his bevy of beach bunnies.

"I don't know what I do to them!"Charlie sighs at one point--and neither do I, since he's really not that good looking.

Don, on the other hand, has become infatuated with the strangely accented Katrina (Ulla Stromstedt), whom he met on the boat crossing over. When Don attempted to make a little small talk, Katrina launched into a lengthy dissertation about how, when she was last scuba diving, she met up with "a little fish" who followed her around and then suddenly swam away, leaving her heart-broken. Don listens dumbfounded to Katrina's story and then suggests they hook up later on the beach. Unfortunately, she's already spoken for: Katrina's deeply tanned fiance Angelo (Lyle Waggoner) is waiting for her on Catalina island. As it turns out, Angelo is a professional scuba diver and (gasp!) in cahoots with Lakopolous.

With Katrina unavailable (at the moment), Don's head is soon turned by Charlie's perky blond beach bunny sister Tina (Venita Wolf, who gets an "introducing" credit). However, when Katrina suddenly shows up on the beach and announces that she and Angelo are through, Don quickly ditches Tina for Katrina, much to Tina's annoyance. Luckily, Tina finds a new distraction in Tad.

Sparkling Repartee Between Tina and Tad:

She: You don't catch on very fast, do you?

He: I'm afraid I'm not use to the speed.

Later on, Tad will ask Tina about her former swain Don, to which she suggestively replies, "We are not engaged." 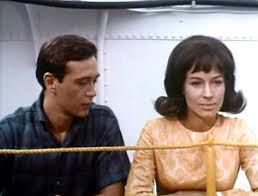 Let's leave the beach blanket bingo portion of our flick for a moment and return to the art scam sub-plot.

Anne has finished her scroll and hubby Arthur has placed the real item and its duplicate in separate canisters. Lakopoloas, meanwhile, doesn't trust the the Duval's as much as they think he does. To that end, he sends a mustachioed henchman to scuba dive over to the Duval's yacht and snatch the scroll.

I wish I could report that hilarious high-seas hijinks ensue, but I can't. Instead, Laurence nearly wets himself and screams, "The water fuzz!"--causing the real artifact to go sailing over the railing and into the drink. Ha, ha, ha! With "the rare Chinese scroll" now resting on the ocean floor, how will the Duval's get it back?

Simple: Arthur proposes son Tad invite his swingin' beach buddies over for a scuba diving scavenger hunt. First prize, of course, goes whoever finds the canister (which none of the kids know is holding a stolen scroll, natch).

Yet again I wish I could report that Arthur's plan was a success or even funny, but I can't. Lakopoloas sends over even more henchmen to spoil the fun. Slapstick fights and people tumbling overboard ensue. Only this time, Arthur and Anne are forced to admit to their son that, yes, they are involved in a shady deal. So how will the Duval's defeat Lakopoloas and keep out of jail at the same time? 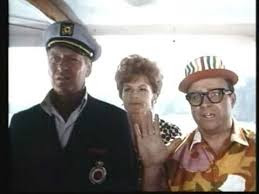 Arthur, Anne and Laurence are forced to admit the plot of their movie makes no sense.

Leave it up to the deeply crew-cutted Tad to devise a "switcheroo" on the sinister Greek tycoon. To pull it off, he will need the help of Don, Charlie, Tina and Charlie's flock of females. I am not going to relay the specifics of this plan because, well, I just don't feel like it. Besides, you can watch the movie yourself to find this stuff out and you should. In fact, that's the whole point of this movie blog: to get people to watch these movies! I can't do everything for you! I'm way too busy. I will, however, assure you that everything goes smooth as silk.

Soon enough, "the rare Chinese scroll" is back in its proper place. The Duval's swear-off any future criminal activities. And "Catalina Caper" staggers to its long anticipated conclusion. Don and Katrina are officially a couple. Tad and Tina are officially a couple. Charlie's dance card is as full as ever. Greek tycoon Lakopolas has sailed away on his huge yacht, musing, "You win some, you lose some." His goons, meanwhile, are rotting away in jail. As for that Donner guy from "Mork and Mindy": he's revealed to be "Fingers O'Toole", a government agent who specializes in tracking down art thieves. He had been on the Duval's trail for some time, but Tad's "switcheroo" on Lakopoloas prevents him from placing his parents in the slammer. The jerk performs a couple more pratfalls and then graciously departs.

When we last see them, Don, Katrina, Tad, Tina, the Duvals, Laurence, Charlie, his beach bunnies and tons of extras are dancing up a storm. As they twist and shout under the Catalina sun, we bid them all a fond farewell. It's all over now...except for the credits... and the blame.

As I have said before, nobody watches beach party movies expecting great wit or wisdom. The success of these films depend on the music and the cast. In the case of "Catalina Caper", both of these elements fall way short of the mark. In fact, the personal stories of the cast members are a lot more interesting than the characters they played on screen. To wit:

Tommy Kirk, as the stolid Don, was a Disney  kid and teen star who appeared in films like "Old Yeller", "Swiss Family Robinson" and "Flubber". After his career peeked, Kirk went on to star in even dumber films than "Catalina Caper", such as "Pajama Party" and "Mars Needs Women" before fading away. 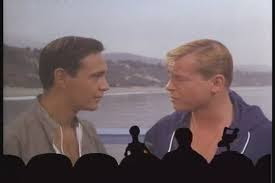 The deeply crew-cutted Peter Duryea was the son of Dan Duryea. Outside of our featured flick, Peter is best known for his role in the "Star Trek" pilot "The Cage", which was later retooled into "The Menagerie".

Venita Wolf, the perky Tina, was a top model and beauty pageant winner (Queen of the May in 1962) before making her debut in this surf-board wiped out. You can also get a glimpse of her in the Junk Cinema Jewel "The Oscar", as one of Frankie Fane's fellow apartment dwellers.Wolf  also appeared in the "Squire of Gothos" episode of "Star Trek". She was the cover girl of Playboy's July 1967 issue, too.

Although her character was suppose to be Greek, "Creepy Girl" Ulla Stromstedt was actually Swedish. She studied languages and art at the Sorbonne and was accepted into the Actor's Studio. How she washed up onto the shores of "Catalina Caper" isn't clear.

In conclusion, "Catalina Caper" is a colorful dumb beach party movie that nobody remembers--except for Junk Cinema. And why does Junk Cinema embrace such a flick? Because if we don't, who will? This movie never set out to hurt anybody, unlike, say, "Water World" or "Ghostbusters 2", which hurt a lot of people. Nobody in the cast went on to win an Oscar or conquer Broadway. None of the film's songs became classics. Instead, "Catalina Caper" just filled up two hours of viewing time, which is exactly what it was designed to do. Nothing more, nothing less.

And that's all-right with me.

So, until next time movie lovers, always wear your sum block, and SAVE THE MOVIES! 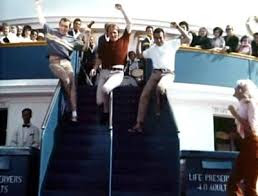 "Hurray! The movie is over!"