Have sneer, will travel: Elvis at the wheel of his latest cinematic Edsel, "Spinout".

Elvis Presley made 31 movies during his storied career.

Although fans of the King will defensively point out that none of Elvis' movies ever lost any money and he was a legitimate box-office draw. However, what they cannot deny is that the quality of Elvis' big screen efforts often reside somewhere between a drunken Karaoke night and "Sharknado, Part 3."

It did not have to be this way. With the right scripts and the right directors, Elvis could have had a real film career. After all, he had looks, sex appeal, talent and charisma to burn. 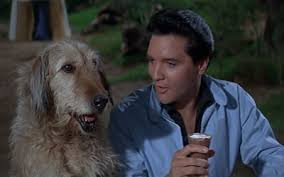 Mike McCoy enjoys a chat with the only female in "Spinout" who doesn't want to marry him.

Instead, he chose (or was blackmailed) into appearing in Cheese Whiz like "Spinout" (1966), a painfully unfunny "musical romantic comedy" where Presley plays rock'n'roll singer/race car driver pursued by three different women who all want the same thing: marriage. To him.

How did these women decide Mike was "The One" for them? Well, I'll tell you.

Les, who wears her hair in a Beatles mop top, is Mike's drummer. She's also the brains of his organization, bossing around band mates Larry and Curly (Three Stooges, anyone?) and preparing gourmet meals for the gang. Naturally, everybody is so used to thinking of Les as "one of the guys" that they forget she's a girl--forcing her to constantly remind them of this fact. Les is forever making goo-goo eyes at Mike, so her feelings should come as no surprise to anyone.

Meeting Cynthia proved to be a bit more complicated.

"Get Out Of My Dreams, Get Into My Car": Rich girl Cynthia (Shelley Fabares with her back to the camera) and Mike suffer a collision course on the freeway of love.

She and Mike first locked eyes on the freeway, where they engaged in a round of high speed Chicken. Then Mike crashes through a guard rail and flies into a near-by lake.

"Hey! You're all wet!" the none-to-bright Cynthia chirps. "I saw you last night at the Crazy Club! You were great!" Then she adds, "You're cute!"

To which Mike replies, "Naw, you're cute!"

"I'm just about to go for you!" Mike screams. 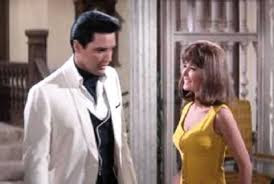 To which Cynthia squeals, "Oooh, I can hardly wait!"

"If you're not out of here in about three seconds, I'm gonna turn ya over my knee and paddle your bottom till it's as red as that jalopy you're drivin'!" Mike hollers.

Because Cynthia is a high society trust-funder used to getting everything she wants, she promptly decides she wants Mike.

Diana St. Clare, on the other hand, has been secretly following Mike around the country and taking detailed notes for her latest book. When she finally confronts her subject, Mike asks the author, "When you find this Mr. Perfect, does he get some kind of award?" "There's nothin' I enjoy more than singin' for a girl," Mike declares, "but it's gotta be one I pick!"

He also refuses to drive the latest Foxhough Special because Mike wants to win the "big race" in his own car for his own reasons--not as a shill for Foxhough Motors.

Like his daughter, Foxy Foxhough is used to getting what he wants. So when Mike continually refuses his offer to sing for Cynthia's birthday (turning down a $5,000 fee, which is $37, 189.49 in 2016 values) Foxy is undaunted. "McCoy, you'll be there," he smugly replies. Just to be sure, Foxy cancels Mike's concert tour.

The band duly shows up at Foxhough Manor, where Mike warbles "I'm Ready To Fall In Love With You" to Cynthia as required. You can tell McCoy is performing under protest because he moves in so close to Cynthia he can see her nose hairs. He also narrows his eyes and purses his famous liver lips, so it's perfectly understandable when Cynthia plants a big, fat kiss on Mike's puss when his song is finished. 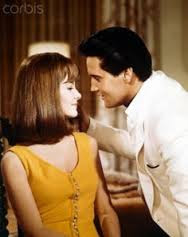 Their set over, the band prepares to leave, but Cynthia has other ideas. Mike's in-house command performance has convinced the air-headed heiress that she's even more in love with Mike and she's even more determined to marry him. Soon. What's more, once they're hitched, Cynthia plans on Mike giving up rock'n'roll and taking a "son-in-law-job" with Foxhough Motors. Mike, of course, is horrified.

It's just at this moment that Diana St. Clare pops back into the picture. To the surprise of no one, Diana has chosen Mike as her "perfect American male."

"As soon as I domesticate you, get you house-broken, you'll be the best husband a girl ever had," Diana declares.

Clearly, something drastic must be done to save Mike from the shackles of matrimony, but what? 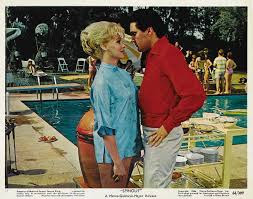 Putting two and two together (and getting five), the gang moves into the mansion next door to the Foxhoughs and proceed to throw one swingin' pool party after another. Supposedly, this non-stop revelry will annoy Foxy Foxhough and convince Cynthia that Mike is one party animal that can't be tamed.

Of course, no such thing happens. Instead, Cynthia shows up at one of Mike's shin-digs in her bikini and wraps herself around him like a beach blanket. Coincidentally, Diana St. Clare also arrives on the scene, but she falls into conversation with Foxy Foxhough. Neither of them wants Cynthia to marry Mike, so they discuss various ways to make sure this doesn't happen. Not to be left out of the fun is drummer Les, who stops gourmet cooking long enough to ditch her tomboy duds for a slinky gown, all the better to impress Mike.

Now, remember that "big race" Mike has been preparing for? The one Foxhough insists he drive his latest car in? Race day finally arrives and the cast converges at the track. Mike is in his Cobra, Foxy Foxhough is in his Foxhough Motors Special and soon they are off...except some unknown rival suddenly yanks Mike out of his Cobra and zooms off, leaving McCoy in the dust. No matter, Elvis merely borrows someone else's car and puts pedal to the medal to catch up.

Of course, movie lovers, you know what happens next: shots of cars zooming around at lighting speed, shots of cars passing each other on the course, shots of cars making quick turns, shots of actors gripping their steering wheels for dear life, shots of cars spinning out, shots of cars hitting hay bales, shots of the crowd going wild etc., etc. Eventually Elvis wins the "big race" because it's his movie. That ties up one plot point. But what about those three marriage-obsessed gals panting after Mike like hyenas?

Easy. Mike marries Diana St. Clare...to Foxy Foxhough. He then marries Les off to Tracy, a policeman-slash-gourmet cook-slash-minor character that I didn't see fit to mention until now. Last but not least, Mike marries Cynthia to her father's chief assistant Philip, an annoying little putz who faints when he's under stress and (surprise, surprise) has loved Cynthia from afar for years. I'm just now mentioning Philip because the movie is over and Cynthia had to marry somebody. 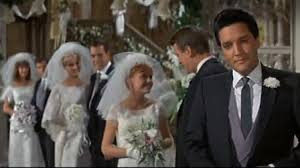 Here come the brides! Mike marries Cynthia, Diana and Les...to somebody else.

With all three gals happily hitched, and his trophy from the "big race" in the back seat of his car, Mike, Larry, Curly and their new female drummer hit the road, where a marriage-free future (and even worse movies) await, at least for Elvis.

Predictably, "Spinout" was a hit with Elvis' fans, but nobody else. Critics were especially put out with the flick's unrelenting stupidity. The Hollywood Reporter called "Spinout" "foolish and altogether improbable." Films and Filming described the flick as "monotonously and unfailingly vapid." Their critic (Richard Davis) even took a swipe a Elvis' figure, carping that the King was "getting decidedly tubby" (perhaps he could see the toll all those fried banana and peanut-butter sandwiches were beginning to take?). Over at Time magazine, meanwhile, the reviewer took issue with Elvis' hair: "He now sports a glossy something on his summit that adds at least five inches to his altitude and looks like a swath of hot buttered yak wool."

Of course, Elvis was not the only famous singer who failed--miserably--at the movies. Madonna, Mariah Carey, Perry Como, Tony Bennett, Roger Daltry, Bob Dylan, Paul Simon, Neil Diamond, Ringo Starr, Peter Frampton, the Bee Gees, Brittney Spears, Justin Timberlake and Jon Bon Jovi have all similarly disgraced themselves. And while Elvis may not have made worse movies than those warblers did, he did make more of them. And he couldn't have done it without his fans! Apparently, Elvis fans are the most loyal fans in the world--or they were brainwashed, I don't know. It's hard to believe living, breathing, thinking people would sit through 31 terrible movies just because Elvis was in them, but stranger things have happened, right? I mean, people bought Pet Rocks, wore bell-bottom jeans, listened to disco, voted for Ronald Reagan, ratted their hair, bought Giorgio, drank Crystal Pepsi and made "The Dukes of Hazard" at top-ten TV hit. Taken in that context, Elvis' loyal but undemanding fans might not seem so crazy after all.

Here is where I leave you, movie lovers. However, please remember that uneasy is the head that wears (the rock 'n' roll) crown and SAVE THE MOVIES.