Peter Mark Richman IS the "Agent For H.A.R.M."! 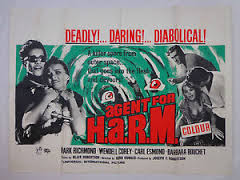 Today I am pleased to announce I am one step closer to my goal of seeing every cut-rate James Bond rip-off ever made with the recent acquisition  of "Agent For H.A.R.M."!

A failed TV pilot from 1966 which was released to movie theaters (Lord knows why), "Agent For H.A.R.M." has all the James Bondian elements the producers could afford on their TV budget: a jazzy score with crazy credits; a secret government agency (H.A.R.M.) which does international espionage work; a suave secret agent (Peter Mark Richman) who loves the ladies; a craggy boss (Wendell Corey) who is always lecturing Chance on departmental policy; a strangely accented villain
who works for the Commies; a defecting East German (Carl Esmond), who has a sexy niece who only wears bikinis; futuristic gadgets (like a man's electric shaver that doubles as a camera/recorder); and an evil plan involving spores that eat human flesh.

More about that later.

Unfortunately, the one thing "Agent For H.A.R.M." doesn't have is glizy locations for backdrops. So instead of the gaming tables at Monte Carlo or the picturesque Alps or even shots of London's Hyde Park, "Agent For H.A.R.M." gives us a modest two-story beach house in San Diego and the Sea Urchin Restaurant for local color. 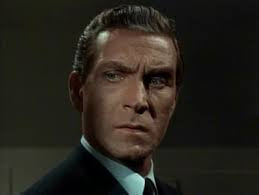 "The name is Chance. Adam Chance.": Peter Mark Richman as one of the more obscure James Bond imitators of the 1960's.

Anywhooo, it's 1966 and The Cold War is blazing hot and heavy. Those pesky Commies are once again furiously working on a plan to rule the world--or at least take over part of Canada. That's what motivated East German scientist Dr. Janas Steffanic to defect to the West. Unfortunately, he was about half-way to safety when a baddie in a beret tries to kill him. That leads to a fist fight/gun battle where the evil guy (and Dr. Steffanic's traveling buddy) are shot with a revolver that sprays flesh-eating spores. As their faces turn to goo, Dr. Steffanic drives off to freedom in a Chevy van (I don't know if he ever made love in it and that's all right with me).

Now we are ready to meet our agent for H.A.R.M.: Adam Chance. He's at "the judo range" with a comely agent-in-training.

"There's so much to learn," the aspiring agent pants. "Could we continue our lessons later? Say, at my apartment?"

Chance would love to comply, but the bosses at H.A.R.M. are calling. See. an agent in Italy has been killed, as well as Dr. Steffanic's wimpy assistant Henry.  H.A.R.M. head Wendell Corey thus sends Chance over to exotic San Diego to see what's up.

Lounging at the beach in a striped tent (and a tiny bikini) is Dr. Steffanic's niece Ava (Barbara Boucet). "I'm 22, unencumbered and, if I'd known you were coming, I'd have been more presentable," Ava twitters to the agent. 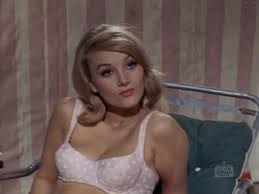 "If Washington had known you here, they'd have never sent me," Chance parries, while kissing Ava's outstretched hand.

Dr. Steffanic, you see, is working on a top secret project and he refuses to tell anybody the details--not even H.A.R.M.

"I have a job to do!" the defecting doctor thunders to Chance, "Alone!"

"How can I trust you if you won't trust me?" Chance thunders back. "Do you think you can't get hurt, doctor, because this is America?! Apple pie and all that jazz?" Narrowing his eyes, Chance coldly announces, "My job is to keep the pie on the table!"

Realizing he can't argue with such brilliant logic, Dr. Steffanic 'fesses up. Turns out, the East Germans have created a lethal powder out of an alien meteor that eats human flesh. The Commies plan to spray this dust on the West's fruits and veggies, making those apple pies deadly indeed. Dr. Steffanic found this out and was horrified. That's why he high-tailed it to the West. Since then, the good doctor has been trying to create an antidote--something fey Commie baddie Basil Malko (Martin Kosleck) really wants.

Now that Chance finally understands what he's up against, he devises a cunning plan to save the world. Part of that cunning plan involves hiding in the back of a fake dry cleaning van and strangling one of Malko's preppy goons with a wire hanger. Later on, Chance pulls out a special thing-a-ma-jig he stored in the back of Dr. Steffanic's TV (in 1966 TV sets were huge) and hot wires the door knob of the beach house. When another of Malko's preppy goons opens the door, he's fried. Hearing all the buzzing and screaming, Ava asks Chance (whom she was making out with) what's going on. 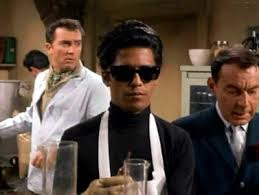 "I Wear My Sunglasses At Night. And Morning. And Afternoon.": Rafael Campos is one of Basil Malko's hippest henchmen.

Although Ava and Chance appear to be enjoying a steamy affair (they even go swimming at night), not everything is what it seems to be. Ava, it turns out, is a secret agent too, but for the baddies. In fact, she may not even be Steffanic's real niece! Ava has been sending secret messages all along to Malko via her Barbie record player, allowing him to know Chance's every move. And she even replaces Chance's gun with one that doesn't work--while she was kissing the hell out of him, mind you.

"Agent For H.A.R.M." ends, as all secret agent movies must, with a race against time to prevent the crop dusting of our fruits and veggies with those flesh eating spores. There is also a duel between Dr. Stffanic and Malko, where the defecting doctor is shot with the spore gun. But wait! Dr. Steffanic has perfected the antidote--and even tried it on himself! Super evil Malko is fit to be tied that Steffanic doesn't instantly turn into goo, but he doesn't have time to pout: Chance sneaks up and pours a bunch of spore dust on Malko. Soon the Commie is simmering in his own goo. Our apple pies are saved!

Meanwhile, back at the beach house, Ava (wearing the only dress she probably owns) is busily packing for "The World Archery Competition" to be held in Vienna. Who should stroll in but Chance, who announces that Ava is under arrest. At first, she denies his claims and even tries to defend herself (she registered for the archery competition under a false name to protect herself from Malko's goons). When that fails, Ava throws herself at Chance. Nibbling at his lips, reminding him of all the fun they've had, she purrs, "Oh, Adam, don't let zem take me." However, Ava's wanton ways have no effect on Chance, who is nothing if not professional. "Come on Angel face, cut the Borsch," he snaps. Then Adam coolly hands her off to fellow H.A.R.M. agents and closes the book on his latest assignment.

Because "Agent For H.A.R.M." was a TV pilot and the producers clearly hoped future episodes were in the offering, the flick's ending suggests viewers would be seeing a lot more of Chance's daring do in the future. 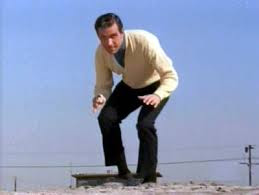 A nattily dressed Adam Chance prepares to spring into action...well, some action.

Of course, they didn't.

I once read that musicals were the hardest movies to make. However, after watching quite a few of these super spy movies, I am beginning to believe spy movies are the hardest movies to make. When you take into account that many countries have tried and failed to create a worthy equal to 007, you can't help but wonder what the problem is. Nobody may do it better than James Bond, but surely someone else out there could do it just as well.

As far as "Agent For H.A.R.M." is concerned, the problems were pretty obvious: the leading man wasn't very charismatic, the villains weren't interesting, the setting was pretty blah, it was clear from the beginning that Ava was up to no good and the "action sequences" moved slower than great-grandma at the mall.

In other words, "Agent For H.A.R.M." is entirely clueless. Seek it out and watch it NOW! 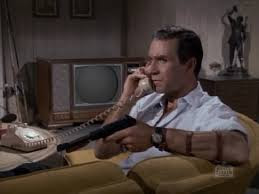 "Sorry, Wrong Number": Peter Mark Richman decides to phone in the rest of his performance.