Who Will Win The Battle Between "Earth Vs. The Spider"? 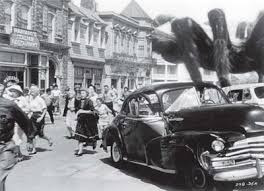 "Hey, that's a rented car!": Pandemonium strikes when a giant spider is super imposed on the terrified residents of a small town in Bert I. Gordon's 1958 epic "Earth Vs. The Spider" (AKA "The Spider").

Do you remember Little Miss Muffet?

In case you forgot, she's the one who sat on a tuffet eating her curds and whey, when along came a spider, which sat down beside her, and frightened Miss Muffet away. 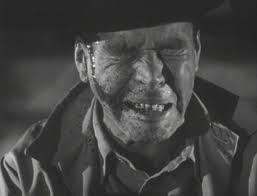 "OW! That stings!": The ill-fated father of bobby soxer Carol winces in pain...just like the audience.

Because bargain basement filmmaker Bert I. Gordon has done Little Miss Muffet one better. In his 1958 epic "Earth Vs. The Spider" (AKA "The Spider"), his spider is not content to merely frighten you "away". NOPE. His spider wants to kill you, drink all your blood, drag your filthy carcass back to its lair and wrap you up in a cocoon so you will stay nice and fresh when he decides to munch on you later.

Don't say it couldn't happen, because that's exactly what happened to bobby soxer Carol's dad (some unknown guy)! He was driving home late one night after purchasing her birthday present. Then he suddenly squinted his eyes and screamed bloody murder. Next, somebody throws raspberry jam in his face. Then his truck crashes--and the screen goes ominously dark.

The next day we see bobby soxer Carol (June Kenney) walking to school. Dad never arrived home, it's her birthday and she's totally bummed out. Then quasi-boyfriend Mike (Eugene Persson) bounds up. He tries to reassure bobby soxer Carol by reminding her that dear old dad is a total booze hound prone to benders that could last for weeks. What's more, the whole town knows it, so she shouldn't worry because pop's probably just in a drunk tank somewhere!

Bobby soxer Carol makes a face and stalks off. 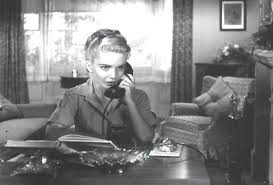 Later that day, quasi-boyfriend Mike apologizes to bobby soxer Carol. He even offers to help her look for dad. Off they drive into the countryside and what do you suppose they find? They find bobby soxer Carol's dad's mangled truck. They also find her birthday present. Dad, however, is nowhere to be found. So our two plucky protagonists decide to check out a near-by cave, which has a "No Trespassing" sign clearly posted out front. The logic behind their decision is that bobby soxer Carol's dad might have gone into the cave "to keep warm" (or perhaps sleep it off).

While inside the cave, bobby soxer Carol and quasi-boyfriend Mike find several human skeletons. They also "fall" off a "ledge" and land smack dab into the middle of a "spider's web"...a spider's web that looks suspiciously like a volley ball net. Trust me on this one: I hate volleyball and I know a volleyball net when I see one and this "web" is indeed a volleyball net. In fact, I practically break out in hives when I see a volleyball net, because I have so many horrible gym class experiences seared onto my soul that revolve around volleyball. But enough about me! What about bobby soxer Carol and quasi-boyfriend Mike?!

Well, they are struggling to get unstuck from the huge web. As they are doing this, the teenagers hear a loud growling sound, sort of like Janis Joplin gargling with Clorox Bleach. The sounds of this gargling will soon be replaced by the sounds of bobby soxer Carol shrieking like a dental drill because a black, hairy spider the size of a mini van is steadily crawling towards them!

Bobby soxer Carol and quasi-boyfriend Mike mange to unstick themselves and escape. They run like hell or, rather, drive like hell back into town to warn everybody about the disaster that is surely coming their way.

The only person who really takes their claims seriously is high school science teacher Mr. Kingman (Ed Kemmer). Never the less, he, Sheriff Cagle (Gene Roth), a silver-haired, doughy guy who refuses to believe in giant spiders, a posse of police officers, a bunch of gentleman with a lifetime supply of DDT and our teen couple head back to the cave. Once inside, they find the body of bobby soxer Carol's drunk dad. Sure, he's dead, because the spider drained all his blood, but at least he's sober for once. Walking further along, the gang stumble upon the spider's web, which is actually a giant volleyball net. Then the menacing gargles of the spider pierce the air. The DDT experts put on their gas masks and blast the beastie with everything they've got. The giant spider is knocked off all its eight legs and declared dead. Except for the loss of one policeman, it's been a successful mission and everyone prepares to return home. 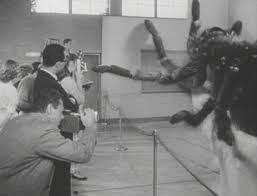 "Say cheese!": The giant spider enjoys a photo-op with the local press.

Sheriff Cagel wants to blast the spider's cave shut for security reasons, which seems reasonable. However, Mr. Kingman insists they drag the super spider over to the local university so it can be studied. "When nature makes a freak, it usually dies," the prof explains. See, only "the eggheads" at the university are capable of understanding how this king-sized spider lived. Furthermore, their research will enable folks to figure out how to prevent future giant spider outbreaks. The sheriff reluctantly agrees.

When we next see our eight legged freak, he's roped off in a corner of the high school gym. Mr. Kingman assures everybody that the beastie is deader than a door nail. However, when a fellow "egghead" is knocked to the floor by one of the "dead" spider's hairy legs, the prof insists it was merely an "involuntary muscle spasm" which "happens all the time."

It's the approaching final act of "Earth Vs. The Spider" where director/producer Bert I. Gordon pulls out all the stops, masterminding a frenzied climax where various plot points surge in from all directions and merge into a massive pile-up outside the giant spider's cave.

Plot Point#1: Bobby soxer Carol is despondent not only at the loss of her drunk dad, but because she left her birthday present at the cave. She convinces quasi-boyfriend Mike to take her back to retrieve it. Naturally they get lost while searching in the cave. 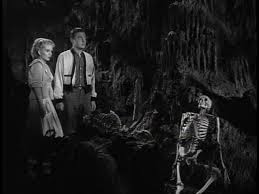 Plot Point#2: Turns out the giant spider is not dead! This becomes apparent as a group of teenagers practice for the upcoming sock-hop in the gym. As they wail away on their instruments (and drama club members jitterbug), the giant spider WAKES UP and promptly bursts through the walls of the gym. Once free, he hits Main Street.

Plot Point#3: While the folks on Main Street scream, run, crash their cars and basically go ape-shit, the spider calmly ambles around. Turns out the spider just wants to go home. So after he trashes a few houses, munches on a few citizens and turns over some cars, the spider heads for his cave.

Plot Point#4: Mr. Kingman, Sheriff Cagle, a bunch of deputies, some city workers et. al gather up all the explosives they can carry and drive to the spider's cave. This time everybody agrees that sealing up the jumbo beastie's cave is a pretty good idea.

Plot Point#5: No sooner have the city workers set off an explosion that seals the cave tighter than a drum, the parents of bobby soxer Carol and her quasi-boyfriend Mike show up. As it's 100% certain the teenagers are inside the cave, the city workers must now blast OPEN the cave they just blasted SHUT. D'oh!

Plot Point#6: Bobby soxer Carol, quasi-boyfriend Mike and, alas, the spider, all survive the blast. The plucky teens then gingerly make their way to the front of the cave. As they scream for help, the crew workers, who are furiously digging a hole the kids can climb out of, hear them. But just when it appears that escape is imminent, Plot Point#7, in the form of our giant spider friend, rears its ugly head. 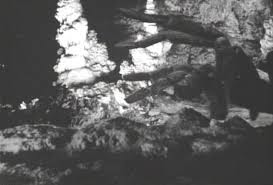 "I'm not dead yet!": DDT, bullets and an explosion can't stop this spider.

Plot Point#7: In order to vanquish the spider once and for all, and to save the teen couple, Mr. Kingman lowers down some electrical wires to quasi-boyfriend Mike. The plan is to electrocute the spider as it crawls over the wires. Although this seems like a dicey proposition, it works like a charm and the air is soon filled with the scent of fried spider. (Wanna bet it tastes like chicken?)

Safe at last, bobby soxer Carol and quasi-boyfriend Mike climb out of the cave and into the warm embraces of their parents. Earth having vanquished the spider, everybody wearily heads for home, again.Good night and have a pleasant, spider-free tomorrow.

"Earth vs. The Spider" is such a punishingly dreadful film that its only redeeming features are the many glitches, goofs and continuity errors that stick out like a bag of Cheese Puffs at an organic buffet.

First off, I lost track of how many times the people in this movie drove out to the spider's cave, drove away, drove back and then had to repeat the whole process all over again. 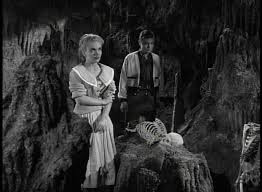 Incidentally, did anyone else notice the city workers in charge of the DDT had the longest hose in the history of the world? Never once did it snag, buckle, get tangled or come up short. And while the city workers are to be congratulated for bringing along such a perfect hose, how come they didn't remember to bring enough gas masks for everybody?

It is also worth noting that the "teens" in "Earth Vs. The Spider" look old enough to be having a mid-life crisis. In fact, Eugene Persson (Mike) was 35 years old at the time of filming!

Even the title of this flick is botched. "Earth Vs. The Spider" implies that the entire planet battled this beastie. In reality, only a science teacher, some police, and a variety of city employees fought this freak. And our science guy wasn't much help, either: it was Mr. Kingman, after all, who insisted on bringing the spider back to town, said the freak was dead when it clearly wasn't and, worst of all, he kept calling the spider an "insect" when it's an "arachnid"!

Did any else notice that "starring" is misspelled in the the flick's credits? Or that the flick showing at the downtown movie theater was "The Amazing Colossal Man", directed by Bert I. Gordon?

Another fine point over looked by Bert I. Gordon and his team: the spider used in this movie is a Tarantula and Tarantulas don't spin webs. 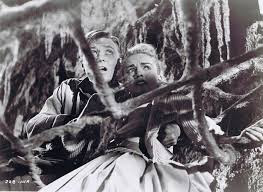 "It's not my web!": Our plucky protagonists are trapped in a huge volley ball net.

Watching "Earth Vs. The Spider" is like looking at a mosaic: it's all those small pieces of incompetence--from misspelled credits to over-age actors to cardboard sets to horrible acting to bad F/X--that create something supremely nutty. Each of those elements had their own part to play in making this movie bad. Film making is a team effort and team Bert I. Gordon can truly congratulate themselves on a job badly done.

Until next time movie lovers, remember that spiders are our friends (unless they are as tall as a sky scrapper) and SAVE THE MOVIES!