For A Good Time Call...Faye Dunaway? 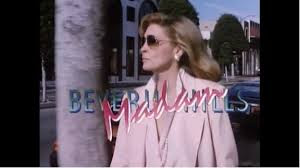 It's a sunny day in Beverly Hills as Lil Hutton (the killer cheek bones of Faye Dunaway) strides purposefully down its swanky side walks. Suddenly she stops. She spies a tres chic dress in the window of one of its famously fab boutiques and marches inside.

"Good morning, Miss Hutton," an obsequious sales clerk chirps, rushing to her side. "May I get you an espresso?"

No, Lil knows what she wants.

"This dress is lovely," Lil declares. "Will you accessorize it and send it up to my house?"

"It'll be ready this afternoon," the clerk assures her. 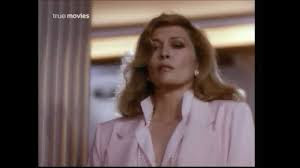 "I'm Faye Dunaway and you're not."

Business concluded, Lil heads over to a chi chi restaurant where the elite meet to eat. As she glides over to her regular table, the power lunching male diners eye her nervously. As well they should. Lil Hutton isn't just anybody, after all. To the uninformed, she's a rich divorcee. To those in the know, she's the "Beverly Hills Madam".

Made in 1986 before Reality TV scorched the broadcast landscape dry, "Beverly Hills Madam" is a made-for-TV-movie. Once a regular part of network programming, made-for-TV-movies are now as rare as hen's teeth. Yet during their hey-day, these mini-flicks covered a wide variety of territory: sci/fi, mystery, "based on a true story", horror, biography, romance, comedy and the "sex and shopping" genre, which is where today's featured film falls squarely into. Made-for-TV-movies offered Junk Cinema lovers an embarrassment of riches in bad acting, big hair and hysterical writing---which our feature presentation provides in spades.

As "Beverly Hills Madam" begins, Lil Hutton is at the top of her game. Her clients are the richest of the rich: senators, tycoons, movie stars, royalty. That's because Lil screens her perspective clients with a fine tooth comb. She also insists her working girls be well dressed, cultured and punctual. This attention to detail has made Lil rich herself: she resides in a fancy mansion, drives a spiffy car, never appears in the same outfit twice, dines at pricey eateries, has a maid and butler and gets invited to charity balls (no pun intended).

However, no one can stay on top forever (no pun intended) and cracks are starting to appear in Lil's carefully crafted construction.

Claudia ("Manimal"s Melody Anderson), one of her top girls, is leaving Lil's employ because she's found true love. Law student Wendy (Donna Dixon) is finding it difficult to balance her hooking commitments with her study schedule. Then there is ditsy dancer April (Robin Givens), who is always late for "work". While trying to manage these storms, Lil is also breaking in a new hooker, the naive Julie (Terry Ferrell). A native of Nebraska, Julie arrived in L.A. to visit a friend--who has mysteriously vanished. After being robbed, beaten and arrested in a raid, Lil takes Julie under her wing and into her stable of working girls. 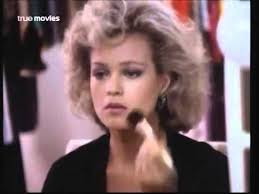 Claudia is one unhappy hooker.

Then the corn really hits the grinder

As Claudia prepares for her wedding to Mr. Perfect, she's recognized by the groom-to-be's uncle--at a family dinner, no less. When Mr. Perfect forces Claudia to own up to her shameful past (she claimed she worked in "public relations", which is kinda accurate), the wedding is off. "Steven! We love each other!" Claudia wails, to no avail. When we next see her, Claudia is crying her eyes out and staggering down lonely street. She begins hitting the bottle in earnest, all the better to numb her broken heart. In fact, Claudia spends so much time drinking, she runs out of money. Ever resourceful, Claudia manages to pay for her latest booze binge by having sex with the delivery boy.

Meanwhile, law student Wendy starts feeling sick and begins upchucking in the bathroom. Oh no, she's preggers. However, when Wendy shares this bit of news with her wealthy, married paramour, he's less than thrilled.

"Do you want money?" he barks.

Compounding Wendy's horror is her sugar-daddy's assertion that he couldn't possibly be the baby's father because of her multitude of other "clients." 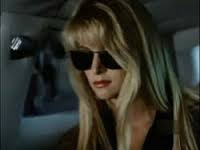 "You're the only one I see!" Wendy throbs.

Later on, Wendy and Lil have a nasty little spat about this turn of events.

"Lin Culver (the client's name) bought you!" Lil hisses. "You can't forget what you are!"

"Oh, I see," Wendy wails. "The furs, the jewels, the declarations of love! You did such a good job convincing me that I was someone special in Lin Culver's life!"

Lil wises Wendy up: "This is business!" 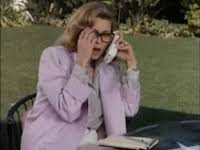 "I'm still Faye Dunaway and you're not, understand?"

With Wendy's future as a hooker up in the air, Lil tosses her an envelope with fifty grand from Culver. Wendy refuses the money, which causes Lil to hit the the roof.

"If you are dumb enough to have a kid," spits Lil, "at least be smart enough to give it something!" Then the madam turns on her high heels and stomps out.

Now, remember Julie? Her break-in period as a hooker is over and Lil sends her on her first "date": a four day cruise where she is suppose to deflower the 18-year old son of a mega- tycoon.

"He's young and sensitive," Lil tells Julie. "Be gentle with him."

That she is. In fact, when the cruise is over, Julie and Justin are MADLY IN LOVE and want to get married. "Men don't marry prostitutes," Lil asserts when Julie tells her the happy news. But Julie insists that she and Justin are different. So it comes as quite a shock when she travels to Justin's McMansion and his angry dad wants her gone. Justin wants her gone, too, especially after he learns his "first time" was co-opted (and paid for) by dear old dad. 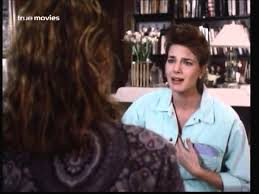 "I felt like a piece of meat! And I'm a Vegan!": Heart-broken Julie unburdens herself to Lil.

Back at Lil's, the devastated Julie packs up. She's learned her lesson; no more hooking for her.

"I don't want to make love to a man for four days and come away with nothing!" the mid-westerner sobs.

"I wouldn't call forty thousand dollars nothing,"  Lil shrugs (she's got a point).

Believe it or not, "Beverly Hills Madam" still isn't over yet!

One evening the perpetually stewed Claudia asks the dim April to take over her regularly scheduled "date". The aspiring dancer agrees, unwittingly signing her death certificate in the process. See, Lil hasn't had the time to properly screen this new "client"--and it turns out that he (and his friends) are not gentlemen. That's made clear on the late night news, when it's reported that April is the victim of  a fatal assault.

The ditsy April (Robin Givens, in her TV movie debut) mistakes a straw for a pair of chopsticks.

It's during a dark and stormy night that "Beverly Hills Madam" finally comes to its frenzied conclusion.

First, Dunaway staggers into her house, still reeling from the news of April's murder. She finds Claudia in her living room, nursing a drink.

Claudia disagrees. In fact, she thinks hookers NEED to drink in order to numb themselves.

"Whores don't have feelings, Lil!" Claudia shrieks. "That's what we give up when we sell ourselves!" 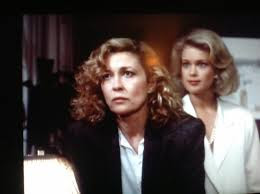 "Don't give me any of your back talk!": Lil and Claudia have words.

Next, the women launch into an argument over who is responsible for April's death. Naturally, Lil blames Claudia, who failed to alert her that April was taking her place. Claudia, on the other hand, says Lil is the guilty party for failing to properly check out the client's "references".

"That could have been me!" Claudia fumes. "It's your fault April is dead!"

Dunaway then has an eye rolling, tear-streaming melt-down, while Anderson hovers over her shoulder and taunts her for failing to protect "her girls."

Finally, Lil gets a grip and has a moment of clarity. She realizes running a prostitution ring is bad and she decides to give it up. Then her phone rings. Lil hesitates to pick it up. Could it be a client asking for a "date"? While Lil dithers, the phone continues to ring. 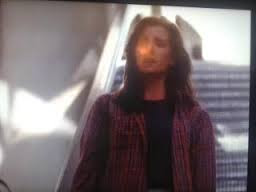 "My acting will improve on 'Star Trek: Deep Space Nine.'": The devastated Julie.

But, no. Instead, Lil draws herself imperiously up and fixes Claudia with a steely gaze.

In one feel swoop, Lil whips out her exclusive client list and tosses into the fire.

"Do it on your own! Like I did!" Lil screams, before adjusting her shoulder pads and stalking off.

Seconds later we see Lil driving off into the night. Where is she going? Who knows? But to assure us that Lil has truly turned over a new leaf, she fumbles for a cigarette, then tosses the smoke aside. Tobacco and prostitution have no place in Lil Hutton's life anymore. 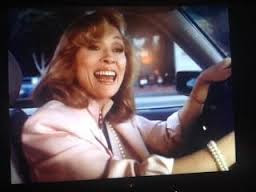 Lil is happy to leave the hooking life behind.

"Beverly Hills Madam" is a sublimely nutty hoot-fest and that is due entirely to the casting of Faye Dunaway as Lil Hutton. The actress, famous for her intensity, sinks her teeth into this part and doesn't let go.When Lil says, "I'm tough on my girls", you believe it. Nobody can clench their jaw, narrow their eyes and read the riot act like Dunaway. In fact, the Oscar winner so owns this movie that no co-star or scenery is safe from her patented scenery chewing--and that includes Louis Jourdan, who plays an "old friend" of madam Lil's in his last screen appearance before passing away in real life.

So, kiddies, what can be learned from watching this (in the words of People magazine) "WHORATIO Alger story"?

1) Sleeping your way to the top isn't all it's cracked up to be.

2) In the world of prostitution, the pimps and madams get all the fun and money, while the hookers do all the work and suffering. 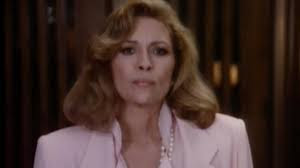 "I will always be Faye Dunaway. Deal with it."

3) Faye Dunaway can chew the Grade A Fat along side Bette Davis, Joan Crawford, Lana Turner and Elizabeth Taylor.

4) Why waste your time watching the fake drama of Reality TV when you can watch the real drama of a flick like "Beverly Hills Madam"?

So, movie lovers, please remember, the high life isn't always so high and mighty, and SAVE THE MOVIES.