Wishing You A Patrick Swayze Christmas!

Patrick Swayze in the role that made him shameless: Dalton in "Road House."

If you're a fan of "MST3K"--and, really, who isn't?--then you know wise-acre Crow T. Robot penned the holiday hymn "A Patrick Swayze Christmas."*

Inspired by the 1989 cultural touchstone "Road House", a sample of the lyrics go as follows:

"Open up your heart/and let the Patrick Swayze Christmas in./ We'll gather at the road house/ with our next of kin...

"It's my way or the highway/that's Christmas at my bar/ I'll have to smash your kneecaps/ if you bastards touch my car...

"I got the word that Santa/ has been stealing from the till/ I think that right jolly old elf/ had better make out his will..." 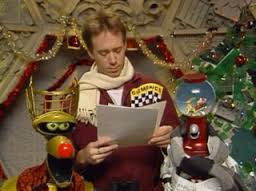 Or not. The movie's pretty awful. But I digress...

Once upon a time (1989, actually), there was a small town called Jasper. In this quaint little burg an establishment named The Double Deuce called home.

Once a decent watering hole, The Double Deuce had inexplicably begun to attract an unseemly crowd of bozos, bimbos, bullies and brawlers. Fights broke out every night. The bar-keep was skimming from the till. Waitresses sold drugs in the john. The house band was forced to play on a stage encased in plexi-glass to protect them from flying debris. In short, The Double Deuce had become double trouble, especially for its owner Frank (Kevin Tighe, best remembered as the stolid EMT Roy on "Emergency!").

Frank realized that if he wanted to reclaim his bar back from hospitality hell, he needed the help of a professional. Enter Dalton (Patrick Swayze in his greatest role ever). An enigmatic chap with a painful past, Dalton is known as the best "cooler" (bouncer) in the universe. His specialty is cleaning up disreputable dives, allowing the owners to remake them as honest businesses. Once that's accomplished, Dalton moves on, leaving nothing behind but the great smell of Brut.

Unfortunately, the unruly clientele of The Double Deuce isn't the only problem plaguing Jasper. The entire town is at the mercy of one Brad Wesley (Ben Gazzara). You see, Brad firmly believes he is responsible for whatever prosperity Jasper enjoys: "When I came to this town after Korea, there was nothin'! I brought the mall here! I got the Seven-Eleven here! I got Photo-Mat here! J.C. Penney is comin' here because of me!"  Thus, Brad considers Jasper his personal property, his kingdom--and he rules over it like a combination of Al Capone, Boss Hogg, Noah Cross and Satan.

Ben Gazzara as Jasper's ruler Brad Wesley: "It's my way or the the highway."

Dalton, of course, is unaware of this situation. That's because he's totally preoccupied with cleaning up The Double Deuce, which he starts immediately. First, Dalton fires an employee who lets in under-age patrons. Next, he cans the waitress dealing drugs in the powder room ("We sell booze here, not drugs," Dalton reminds her.) Another jerk is dismissed when Dalton catches him in the storeroom having sex (doggy style!) with a nameless bimbo whom he lovingly calls "my regular Saturday night thing."

"But I'm on my break!" the moron protests.

"Stay on it!" Dalton replies.

Lastly, Dalton kicks to the curb bar-keep Pat (John Doe), who is skimming about $150 a week from the till. This is a risky move, as Pat happens to be the nephew of Brad Wesley. Soon enough, Uncle Brad sends his goons over to insist his loser nephew (who suffers from "a weak constitution") be rehired. Dalton refuses. When the thugs try pressuring Dalton, he promptly dispatches them with some choice martial arts moves aimed at their crotch and knee-cap areas.

Dalton may have pissed off Brad Wesley, but he has delighted Frank, because The Double Deuce has been reborn under his ministrations. The bar is repainted and refurbished, the staff have new uniforms, the stage is cleared of plexi-glass and the joint is full to capacity every night. Also on the plus side: Dalton has made the acquaintance of Jasper's only non-bimbo resident, Dr. Elizabeth Clay (indie actress Kelly Lynch), known simply as "Doc." 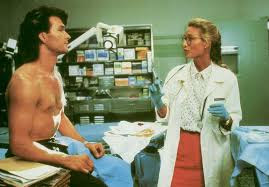 Dalton and Doc discuss the finer points of chronic pain management. He: "Pain don't hurt." She: "Most of my patients would disagree with you."

The smitten kittens meet when Dalton comes in to have stitches after a knife fight. Doc is impressed that her hunky patient carries around copies of his medical records ("Saves time," he explains) and that he has a degree in philosophy from NYU. Dalton insists his major isn't that unique; merely "man's search for faith, shit like that." What is unique? Dalton refuses to be numbed up for his stitches because "pain don't hurt." Naturally, Doc and Dalton are destined for A GREAT LOVE and, more importantly, an explicit (and highly improbable) sex scene later on. However, more plot points must be unloaded first.

Like any corrupt, evil villain, Brad Wesley is not happy that Dalton refuses to accept his rule. The "cooler" barely bats an eye when Brad's goons trash his junker cars. He serenely dispatches Brad's cronies when they attempt to disrupt the newly calm atmosphere of the Double Deuce ("You're too stupid to have fun," Dalton sniffs). He even turns down Brad's offer to work at a rival bar for more money. "There isn't enough money in the world to make me work for you," Dalton announces before stalking off.

So Brad Wesley turns up the heat. He vandalizes Red Webster's (Red West) auto supply store--Red is Dalton's friend and Doc's uncle. He sends a monster truck with wheels the size of a house to demolish the car dealership of Pete Stroudenmire, another pal of Dalton's. When that doesn't work, Brad orders his mullet-wearing flunky Jimmy to fire bomb old coot Emmett's farmhouse--where Dalton rents a room. Dalton saves the oldster, but it's obvious Brad Wesley has become dangerously unhinged...not that he never was the easy going type to begin with. I'm don't know this for a fact, of course, I'm just saying...

Anyway, through out all this Sturm und Drang, Patrick Swayze's Dalton remains as calm, cool and collected as a Zen master. He looks people squarely in the eye, rarely raises his voice and insists his staff "be nice"--until the time has passed to be nice. In his off hours, Dalton practises martial arts in the nude and reads the novel A River Runs Through It.  However, when Brad Wesley has his mentor/best friend Wade Garrett (Sam Elliot) fatally stabbed in the chest, it's no more Mr. Nice Guy. Dalton erupts into an apocalyptic rage which horrifies his cuddlemate Doc, but was clearly designed to sate the blood-lust of the movie's target audience, who were no doubt getting restless with all this "niceness" horse puckey.

With vengeance in his heart, Dalton races over to Brad Wesley's McMansion, where he hits, kicks, stabs, shoots and punches the lights-out of each and every one of Brad Wesley's goons. But that's not all! Dalton flattens one thug by pushing a stuffed polar bear on top of him! He spins donuts on Brad Wesley's manicured lawn! And when Dalton and Brad Wesley have their final, bloody face-to-face confrontation, it appears our hero is preparing to rip Brad's throat out with his bare hands--something Dalton has done before (case in point: the mullet-wearing flunky Jimmy). 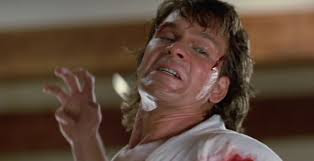 But no. Dalton pulls back. He may bust the knee-caps of unruly bar patrons for a living, but he's not an animal. So he straightens up and walks away. However, like Jason and Freddy Kruger, Brad Wesley cannot be killed or subdued for long. As Dalton wearily staggers away, Brad  rises up and prepares to gun Dalton down...when Red, Pete and Frank miraculously materialize out of thin air and shoot Brad Wesley over and over and over and over again. "This our town!" Red declares,"and don't you forget it!"--as Brad crashes through his glass-top coffee table and dies in a bloody heap.

A moment of silence please, to honor all those who suffered and died under the rule of Brad Wesley. May they find peace in the here-after. May their loved ones find closure. May Jasper heal its divisions and come together as one people, one community. Let the faithful join hands and vow to begin anew.

OK, now that that's over, "Road House" ends the only way it can, with Dalton, totally nude, jumping into the river to frolic with his equally nude cuddlemate Doc. Praise the Lord and pass the sunblock!

Movies as supremely, sublimely nutty as "Road House" resemble those towering champagne fountains at chi-chi weddings--except instead of bubbly, the fountain is spewing cheese. Thick, gooey, highly caloric cheese. From its daffy dialogue (Jimmy to Dalton: "I use to f@#$% guys like you is prison!") to its atrocious acting (Ben Gazzara, are you listening? Yes, I know you have passed away, but I bet you can still hear me! Shame on you!) to its cartoon depiction of violence (near-death by polar bear?) and vigilante justice ("Extremism in the defence of liberty is no vice"*) to its ripped-off and badly used Spaghetti Western motifs ( is Dalton "The High Plains Drifter" or "The Man With No Name"?!) to its homo-erotic sub-text (Jimmy and Dalton's duel to the death, among other examples), the Velveeta just keeps on coming.

And yet...the flick is not quite as harmless as so many other mindless trash-fests celebrated here. It's treatment of women is truly vile. This is best summed up by Wade's comment about Doc, the movie's "respectable" female character: "That gal's got entirely too many brains to have an ass like that." Furthermore, "Road House"s obsession with male genitals (kicking them, comparing their size, flashing them) is, well, icky. Producer Joel Silver knew his target audience (dumb jerks who love violence and hate women) and gave them exactly what they wanted. He made buckets of money, too. But mixed in with the cheese are shards of glass, so be careful.

This where I leave you, movie lovers. Remember, it's my way or the highway, and SAVE THE MOVIES. 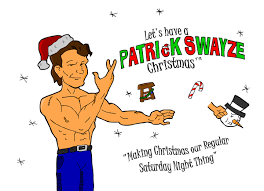 * This quote is from Barry Goldwater.