Bring Me The Head Of Alfredo Garcia...And Sam Peckinpah 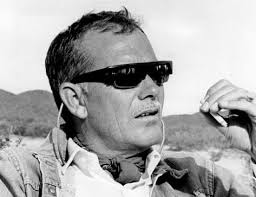 Wanted for crimes against cinema: Sam Peckinpah, co-writer and director of "Bring Me the Head of Alfredo Garcia."


El Jefe (Emilio Fernandez) is a very rich, very powerful man. He is not someone to be trifled with. That is very clear when he summons his young daughter before him.

The girl (who is never named) is preggers. Surrounded by family, associates, servants, flunkies and even members of the clergy, El Jefe asks his daughter, "Who is the father?"

Out of fear or defiance, she refuses to give him the man's name. El Jefe nods his head. One of his flunkies walks up and rips open the girl's blouse. She still refuses to divulge the father's name. El Jefe nods his head again. Another flunky walks up to the girl and breaks her arm, snapping it in two like a bread-stick. This time, she collapses in an agonized heap and gasps, "Alfredo Garcia!"

El Jefe is stunned. "He was like a son to me," he replies. Then El Jefe announces he will give one million dollars to whoever "brings me the head of Alfredo Garcia."

Seconds later, dozens of men scatter on foot, horse-back, motorcycle, car and air plane to track down Alfredo Garcia and relieve him of his precious noggin. 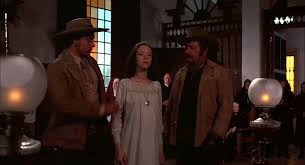 "Once I Had A Secret Love...": El Jefe's pregnant daughter is brought before him.

Welcome, movie lovers, to the world of tough guy director Sam Peckinpah and his "modern day western" "Bring Me the Head of Alfredo Garcia" (1974). 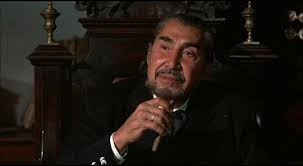 And "Bring Me The Head Of Alfredo Garcia" may be the suckiest of them all.

Now, I know this movie has it's fans. One of them was the late, great Roger Ebert, who called "Alfredo Garcia" a "bizarre masterpiece." I agree that the movie is bizarre, but "masterpiece" is a bit much. MESSterpiece is more accurate. I don't want to burst anyone's bubble or appear "uncool", but I disagree with Mr. Ebert's assessment AND with the critical plaudits "AG" has earned over the years on its way to becoming a "cult classic."

If there ever was a film designed to test an audiences' patience, this is it."Bring Me the Head of Alfredo Garcia" moves at the pace of a drugged Siberian Yak. It appears to have been photographed through the front windshield of a 1967 Rambler that hadn't been washed in months. It has more pauses than a Harold Pinter play. The main characters are cruel, violent, hateful individuals who make certain gym teachers I had seem kind and benevolent in comparison. This movie dares you to watch it--and once you have, you can practically hear director Sam Peckinpah snickering, "Suckers!" from the great beyond.

We will continue the discussion of "AG"s considerable demerits at a later time. For now, let's return to the plot, OK?

After El Jefe issues his command, two contract killers (Robert Webber and Gig Young) wander into a dive bar/bordello in a dead-end town. There they find Bennie (Warren Oates), an American expat/loser playing piano. The gentleman (who are also a couple) flash some bills and ask Bennie if he has seen Alfredo Garcia recently. He says no. The gangsters leave info about where they can be found if the elusive Mr. Garcia does show up. 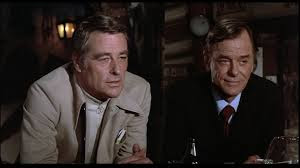 Robert Webber and Gig Young are just two of the no-good-nicks searching for Alfredo Garcia.

Bennie is intrigued by the gangsters and their quest. But he wasn't completely honest with them. It turns out that Bennie knows more about Alfredo Garcia than he let on. See, Bennie has an off-and-on "thing" with a sad-eyed hooker named Elita (Isela Vega). She was deeply in love with Alfredo at one time, but he had "commitment issues" and kept sleeping with other women. Bennie bets that Elita has the inside scoop about Alfredo.

Indeed she does, but the news isn't good: Alfredo Garcia is dead, the victim of a drunk driving accident. This doesn't bother Bennie one bit. Why? Because Bennie has a plan. He will track down Alfredo's grave, dig up the body and chop off Alfredo's noggin. It's not like he needs it anymore, right? Then he will deliver the head to El Jefe and collect the million bucks. What could possibly go wrong? The plan is fool-proof!

However, when Elita expresses misgivings about the project, Bennie snarls, "He's dead! Shut up!" A little while later, he points out, "The church cuts off the feet, fingers and any other god-damned thing from the saints, don't they? Now Alfredo is our savior--he's the saint of money! And I'm going to borrow his head!"

Before Bennie does, he and Elita decide to go on a picnic. They find a nice secluded spot under a large, shady tree. Bennie plays the guitar. Elita rests her head in his lap. The two talk about getting married. This romantic interlude is suddenly interrupted when two bikers roar up. One of these gents is played by actor/singer/songwriter/Rhodes Scholar Kris Kristofferson. He grabs Elita with the clear intention of assaulting her. Bennie remains behind at the picnic site, guarded by the other biker, who helps himself to Bennie's guitar. "You guys are definitely on my shit list," Bennie scowls.

The biker and Elita face each other in a field. The biker takes out his knife and rips Elita's shirt off. She slaps his face. He does nothing. She slaps him again. The biker slaps her back. Poor Elita is resigned to what's about to happen...but nothing happens. His victim's stoicism so completely discombobulates the thug that, well, he experiences impotence. This is so embarrassing that he hangs his head in shame and wanders off. 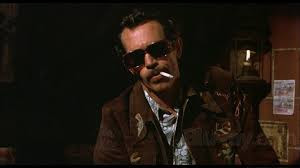 "I Wear My Sunglasses At Night": Warren Oates is Bennie.

What happens next is also pretty discombobulating. Elita seeks out the biker/rapist and finds him sitting on the ground, ashamed of his inability to carry out his assault. How will he face his friends and family? Elita (still topless) feels sorry for the thug and--I am not making this up, in the words of Dave Barry--decides to have sex with him in order to cheer the creep up. Naturally, when Bennie finds these two rolling around in the brush, he's not happy about it and, naturally, does a very Sam Peckinpah thing: he shoots the biker and his buddy.

Putting that disturbing interlude behind them, Bennie and Elita hit the open road to find Alfred's noggin. What they don't anticipate is that A) other people have similar ambitions and B) Mr. Garcia's family, friends and neighbors are very determined that his head will remain on his shoulders, no matter what.

Of course, the more insistent Bennie is about finishing his gory chore and collecting his reward, the more bonkers he becomes and the higher the body count grows. The casualty list includes various Garcia family members, neighbors, fellow gangsters (including Webber and Young) and poor Elita. Soon it's just Bennie and the bloody, rotting head of Alfredo Garcia. Truth be told, these two unfortunates get along really well. "Have a drink Al!" Bennie declares at one point, pouring some hooch on the head. "It wasn't your fault, Al," he assures the noggin after some commotion. Every now and then, Bennie stops at gas stations and flea bag hotels to give Al a shower and change his burlap bag. I'm sure Al appreciated that.

When Bennie and his precious cargo finally arrive at El Jefe's fortified compound, everybody is celebrating the baptism of the strong man's grandson (the boy's ma, who had her arm broken by grandpa's flunkies, seems less happy). Taking leave of the party, Bennie and the young mother follow El Jefe into his panelled study. "I knew you would come," the strong man mutters, sliding a suitcase full of money at Bennie.

This the pay-off Bennie has been waiting for...and, yet, the whole thing feels kind of hollow. El Jefe seems more interested in his baby grandson than Al's head. "Throw it to the pigs," he shrugs. 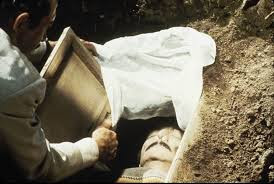 That does it. Bennie's long, long fuse finally ignites. He explains to El Jefe that lots of people died so he could bring him the head of Alfredo Garcia "and one of them was a good friend of mine!" Nobody likes it when their hard work and dedication are ignored and dismissed, and Bennie is no exception. So what does he do? Bennie whips out his gun and begins shooting. And shooting. And shooting. The body count includes El Jefe (to his daughter's satisfaction), various guards and flunkies. Possibly even some party guests. When Sam Peckinpah is behind the camera, everybody's a target.

The final death, of course, is Bennie's, who drives away as El Jefe's goons shoot the hell out of him. He'll never get a chance to spend all that loot or retire somewhere in comfort, but Bennie is beyond caring about that. He finished what he started, which is the main thing. And isn't a job well done it's own reward?

When "Bring Me the Head of Alfredo Garcia" was released in 1974, it was met with deep--although well earned--critical scorn.

"An all out preposterous horror," said Esquire magazine.

"An exercise in manic machismo so witless," charged Vincent Canby of The New York Times, "you can't believe it was made by the man who directed 'The Wild Bunch.'" 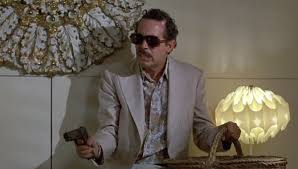 Meanwhile, Joy Gould Boyum of The Wall Street Journal stated, "The only kind of analysis it really invites is psychoanalysis."

Now, you might be asking yourself, "Auntie Bee! If 'Bring Me the Head of Alfredo Garcia' is so awful, why even review it?" 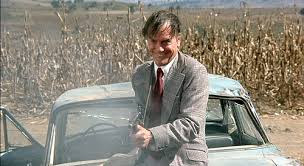 I wanted to give the movie a fair chance.

When I first saw it many years ago, I hated it, but I wondered if that was because I have never been a fan of Westerns. Also, I thought maybe I was too young to appreciate Sam Peckinpah's directorial style and how revolutionary many considered it. Finally, "Alfredo Garcia" had undergone a critical "reassessment" in the ensuing years and, just maybe, with time and age, it had become a better film.

"Bring Me the Head of Alfredo Garcia" is a bad, bad, BAD movie. That's a bold statement, but I'm standing by it. 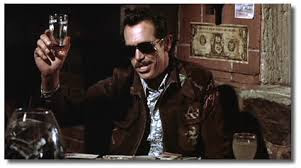 Warren Oates shows us how he was able to get through the filming of "Bring Me the Head of Alfredo Garcia."

1) The old saying "If you are going to seek revenge, you had better dig two graves: one for your victim and one for yourself" is very true. However, in the case of "Alfredo Garcia", digging two graves wouldn't be enough; you'd need a whole graveyard.

2) When delivering a severed head, plan for any and all contingencies. Bring a cooler, plenty of ice and lots of burlap bags. You want your merchandise to be as fresh as possible.

3) Gangsters have very weird ideas about everything. They demand loyalty, yet back-stab each other all the time. They read the Bible and attend church, but think nothing of killing people or breaking their daughter's arm. They value virginity and fidelity, but only in females. They order someone's head to be chopped off and then forget all about it. See? Weird.

4) We never learn a lot about Alfredo Garcia personally, but his family and friends were willing to protect his noggin at the cost of even their own lives. He must not have been such a bad egg after all.

5) If you have gone through hell and high water to bring a volatile strong man the bloody head of the guy who put a bun in his daughter's oven, don't get testy if acts less than grateful. Just take your cash and go. 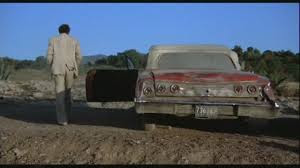 "Geez, there has got to be a cash machine around here somewhere...": Bennie hits a rough patch of road.

So movie lovers, please always remember and never forget, keep your head on your shoulders and SAVE THE MOVIES.