Sisters Are Doin' It For Themselves In "Angel's Revenge" 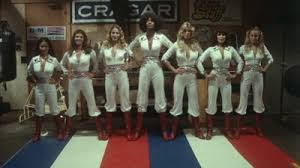 "Fools Rush In Where Angels Fear To Tread": The no-name cast of "Angel's Revenge" suit up for duty.

If you need any more proof that the 1970's were a HORRIBLE decade, our featured flick should do the trick.

"Angel's Revenge" (1979) is a low budget, brain-optional "Charlie's Angel's" rip off that is filled-to-the-gills with feathered hair, Dr. Pepper lip gloss, polyester and, worst of all, disco music.

If all that isn't enough to make you gag on your Pop Rocks, future Oscar winner Jack Palance shows up, along with disgraced Kennedy in-law Peter Lawford--who was reportedly so stewed during production, all his scenes had to be shot with him sitting in a chair. 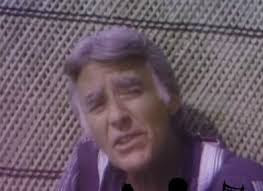 Peter Lawford in one of his (very few) lucid on-screen moments.

Obviously, "Angel's Revenge" promises an embarrassment of bad movie riches. So let's take a deep breath and dive in, OK?

Our pain parade starts by introducing us to a diverse group of young women who are determined to blow up an illegal drug processing plant. They are:

Keiko (Lieu Chinh), a martial arts expert and after-school tutor "newly arrived from Vietnam" who "knows well the problems young kids face." (Please ignore that Keiko is a Japanese name and that the actress portraying her is Chinese.) 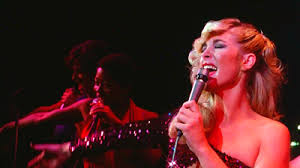 Elaine (Robin Greer), a policewoman who suffers from a bad perm.

And Trish (Liza Greer, Robin's kid sister), a student of April's who nags incessantly to become "one of the Seven."

Needless to say, none of these actresses was cast for their thespian skills. As long as they flipped their feathered locks on cue and remembered to ditch their bras, producer/director Greydon Clark was satisfied. 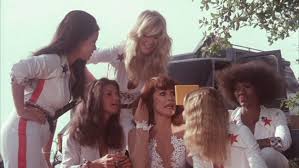 Maria gasps in horror when she realizes her perm didn't take.

Back to the action. Michelle, the rising disco diva, has just finished a rousing rendition of her hit "Shine Your Love" in Vegas when she learns her kid brother Bobby has been beaten and hospitalized. To her horror, Bobby is revealed to be a regular customer of a Christopher Atkins-ish pusher named Sticks (Darby Hinton). When the tween needed a fix, but was out of cash, he conked Sticks on the noggin with a beer bottle and made off with his stash.

The robbery forces Sticks to contact his superior, Mike (the growly/scowly Jack Palance). Mike calls Sticks "real dumb" for allowing a middle schooler to get the better of him--although "real dumb" is an accurate description of Sticks in general. Anyway, the two druggies manage to track down Bobby and Sticks gives the kid one hell of a hiding. Even worse, the pusher calls him "a little twerp" and leaves him on the street to rot.

Bobby, as it turns out, is a student of April's, so the teacher decides the time is right to approach Michelle. After digging through her junk infested purse, April pulls out her "highly detailed" map of the baddies' drug processing plant. Because Michelle is so famous, April believes she can help convince the necessary experts to join her team.

Once the team members are duly assembled, the gals go shopping for a van. This is where they meet Mr. Haney from "Green Acres", Pat Buttrum (who frankly looks embalmed). Dressed in his best Roy Rogers outfit, Pat declares that our heroines are "prettier than a creek full of catfish" and promises to make them a deal "just as sure as a goose goes barefooted." Our savvy sisters have little time for Pat's barnyard analogies, so they quickly take their van and go. 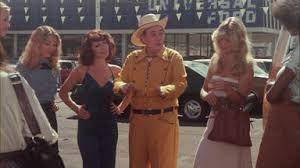 Does Mr. Haney know he's not in "Green Acres" anymore?

Once Terry has their van fitted with such amenities as a turret gun and bazooka (don't ask), the girls realize they need ammo (D'oh!). Lucky for them, a right-wing paramilitary group headed by Jim Backus (Mr. Howell from "Gilligan's Island", who also looks embalmed) is in the area. Maria and Terry case out their compound disguised as a rich widow and her driver. Realizing that the poor, pasty Backus and his Laurel and Hardy-esque goons will be no problem, the gals stage a midnight raid that would embarrass The Three Stooges with its slap-stick incompetence. In fact, the sight of the obviously frail Thurston Howell III screaming orders and having a bowl of gumbo dropped on his head by Terry ("This turkey's mine!" she rages) is rather sad.

OK, the van's ready and the girls have enough ammo to throw a NRA Tupperware party, so our heroines put on their low-cut, spandex jumpsuits and high-heeled boots and prepare to give those illegal drug processing baddies a hit in the hinder they will never forget. You go, girls!

First, April and Keiko cut through the plant's barb wire fencing and kick a couple of guards in the crotch.

Next, Maria approaches the guards at the front gate, claiming she broke her shoe. She also punches them with her brass knuckles and sprays them with mace.

Then, Michelle, Elaine and Terry burst in in their souped-up van, firing their turret gun. 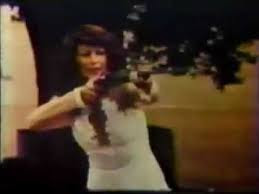 "Hell Hath No Fury Like A Super Model With A Shot Gun": Maria takes aim at some baddies.

As the flunkies at the processing plant flail their arms and race around like penguins trying to fly, Terry hops on her motorcycle and begins lobbing hand grenades. April and Keiko, meanwhile, are busy dumping the drugs down the chimney of another building as explosions and gunfire consume the surrounding area.

Last but not least, April and Keiko jump from the roof of a building into the van. As the gals drive away, the illegal drug processing plant is a smoldering ruin and its employees are either dazed or dead.

Our heroines need a break, so they stop off at a near-by water fall. Stripped down to their skivvies, the gals splash and simper over a job well done.

Unfortunately, the success of "the Seven"s maiden voyage into vigilante justice upsets drug king-pin Peter Lawford; it was his stash, after all. Sitting poolside at his mansion in a gated community, the obviously stewed Lawford slurs abuse at Jack Palance. 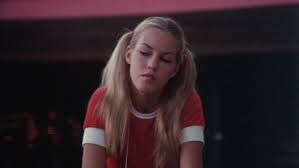 Teen Trish (Liza Greer) wonders how she can get out of this bad movie and into a good one.

"Control, baby," Lawford blathers, "If we don't control them, we will be controlled."

Palance takes this tongue lashing in stride; after all, in a few years "Ripley's Believe It Or Not!" and "City Slickers" will revive his career and save him from the indignity of appearing in flicks like "Angel's Revenge". For the time being, however, Jack agrees to track down the avenging angels and end their anti-drug meddling for good.

Will the "Angels" carry out another daring drug raid? Will street pusher Sticks get his comeuppance? Will Peter Lawford sober up? Will any of "the Seven" learn about the benefits of a jogging bras?

The answers to those queries are: "yes", "and how", "unfortunately, no" and "of course not." However, viewers will be happy to learn that Trish does finally make it into "the Seven", even though it nearly costs her her life--but not really. I don't want to unload any spoilers, but it's nothing fatal.

Of course, "Angel's Revenge" was just one of several productions that sought to copy/cash in the "Charlie's Angels" format. "Flying High" (1978) was a TV program dedicated to the jet set lives of flight attendants working for fictional Sun Airlines. "The American Girls" (also from 1978) was about two female reporters who traveled the country in a special van reporting stories for a "60 Minutes" type news show. Then there was "Velvet" from 1984, where a crack female team of international crime fighters disguise themselves as aerobic instructors. Honest. However, my favorite "Charlie's Angels" rip-off is "Ebony, Ivory and Jade" (1979). This one featured Bert Convey (best remembered as the host of "Tattle Tales") as a former Las Vegas tennis-pro-turned night club singer named Mike Jade who moonlights as a private eye. He solves crimes aided by his back-up dancer/singers Ebony and Ivory. 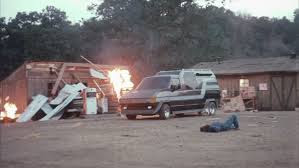 All things considered, "Angel's Revenge" is not be the only low rent "Charlie's Angels" knock-off featuring bad acting and bad hair, but it is the worst. That distinction is even more impressive when one considers how truly awful "Charlie's Angel's" was. Wherever he is, I hope director Greydon Clark (who's other credits include "Joysticks" and "Satan's Cheerleaders") is savoring his triumph.

Therefore, movie lovers, please always remember that stupid is as stupid does and to SAVE THE MOVIES. 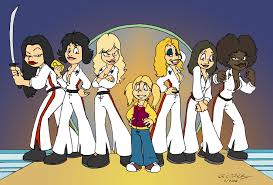