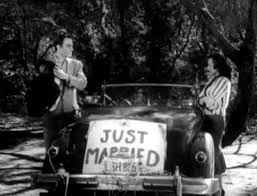 "Baby You Can Drive My Car": Dan and Laura Carson on their wedding day.

If you're married (or in a long-term relationship), you probably have plenty of gripes about your cuddlemate: he/she snores, leaves the towels on the bathroom floor, squeezes the toothpaste from the wrong end of the tube, drives like a maniac, drinks from the milk carton.

So imagine Dan Carson's (Lance Fuller) horror when he learns that his lawfully wedded wife Laura (Charlotte Austin) is more attracted to a gorilla named Spanky than to him--because she was a gorilla herself. In a past life. A queen gorilla, in fact.

Bet that makes your significant other's quirks seem pretty puny in comparison, am I right?

"The Bride and the Beast" (1958) may have only been written by Junk giant Ed D. Wood, Jr., but it's an Ed Wood movie through and through. The ridiculous premise, stiff acting, stock footage, angora sweaters, off-beat sexual obsessions and crazy dialogue-- hallmarks of Ed's unique cinematic style---are all present and accounted for. The only things missing are Tor Johnson and Bela Lugosi. Adrian Weiss may have directed and produced "The Bride and the Beast", but Ed's influence is evident in every frame.

Or, to put it another way: you can take the movie out of Ed Wood, but you can't take Ed Wood out of the movie! 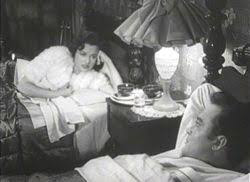 "Was It Good For You Too?": Laura and Dan critique their wedding night.

Laura Carson is an angora sweater-loving socialite. Hubby Dan is a critter catcher with a mansion full of stuffed hunting trophies (eww). Down stairs in a cage is Spanky the gorilla (played by Ray Corrigan) slated for transfer to a zoo in the morning. After the newlyweds arrive home, Dan offers to show Laura the big ape, but warns her not to get too close.

"Oh, don't worry about me," Laura chirps. "I had a pet monkey as a little girl. He loved me, but hated everyone else."

Sure enough, the moment Spanky and Laura's eyes meet they feel the power of things preordained. TRUE LOVE. KISMET. DESTINY.

While Dan rummages around for Spanky's dinner, Laura moves closer to the gorilla's cage. The look in their eyes suggests the two have met before, but where? Spanky recognizes Laura. He runs his paw through her hair; he fingers her sweater. Why are you dressed like this? he seems to be saying. Then he grabs Laura's wrist. She tells him gently but firmly, "Spanky, let go of me. Spanky, you don't want to hurt me."

And he doesn't. Spanky lets go. Then Dan rushes over and hustles Laura away. This makes Spanky furious. What's that human doing with his mate?! He pitches a nasty fit, tossing straw and pounding his chest. Dan has no idea what's gotten into Spanky, so the newlyweds take their leave.

While Spanky simmers downstairs, Dan and Laura prepare for their wedding night. He dons silk PJs. Laura emerges from her dressing room in a frilly nightie. Overcome, Dan sweeps his bride into his arms and carries her over the threshold. As Dan and Laura embrace and kiss, the camera glides over to the fire place...and back again, where we find the newlyweds sound asleep in separate beds (it was 1958, after all.) Later on, Laura has a really weird dream. There are animals and stock footage and really racist depictions of natives. In the dream, Laura appears to be running for safety in a jungle. Then she looks in a pool of water and "sees" her reflection...and she's a gorilla!

Laura's hysterical screams awaken Dan. He reassures his wife that it was "only a dream". To calm her nerves, Dan gives Laura a sedative and promises to call a doctor in the morning. Then he crawls back into his bed and goes night-night.

Spanky, meanwhile, has broken out of his cage. Turns out Laura's sleeping pill wasn't that effective, because she's soon up and around and having a smoke. When she looks over her shoulder, there is Spanky. The bride and the beast approach each other cautiously, slowly. They say nothing. Once again Spanky runs his hairy paw through Laura's hair. He fingers her night dress. Then, in a burst of simian sexuality, Spanky rips off Laura's nightie. She screams and covers herself. Just then, the sound of gunfire pierces the air. Bam! Bam! Bam! Spanky grabs his chest. He staggers out the bedroom and into the hall way. He crashes through the upstairs guard rail and falls to the floor below.

Turns out hubby Dan keeps a gun in his night stand drawer. When he caught Spanky and Laura having their close encounter, he quietly reached for his piece and fired to defend his wife. No word on how he's going to explain Spanky's demise to the zoo. Oh, well, he's probably insured for this sort of thing. 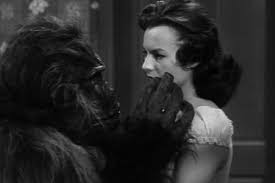 Reflecting on the episode later that evening, Laura confides to Dan,"I still shudder at the strange sensation I had when the gorilla was trying to be tender..."

The next day, Dan has a psychiatrist buddy, Dr. Carl Reiner (William Justine), place Laura in a hypnotic trance to figure out what her disturbing dream might mean. Turns out Laura is especially turned on by angora sweaters. In fact, wearing one was the catalyst to awakening her past life. According to Dr. Reiner, the "dream" is really Laura remembering her previous life as a gorilla.

"Aw, c'mon!" hubby Dan exclaims. "You don't really believe she was a gorilla!"

"All the evidence points to it," the doctor insists. "Her fixation for fur-like materials comes from that fact."

"I'm sorry, doctor, but I just don't buy any of this," Dan insists. 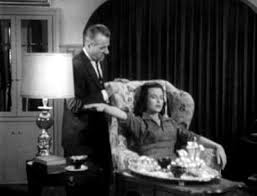 Dr. Carl Reiner puts Laura (and the audience) in a trance.

"Well, you have a right to your opinion," Reiner shrugs.

While Dan remains skeptical, Laura seems just fine. The hypnosis appears to have settled her mind and she eagerly accompanies hubby on his next trip to "Africa"--I say "Africa" because it's clear that "Africa" is played by randomly inserted shots of stock footage from nature documentaries. Furthermore, any "location" shots were filmed in Bronson Canyon, a popular site for cash strapped film makers.

Anywhoo, once Dan, Laura and their team settle into their jungle camp site, "The Bride and the Beast" completely forgets all about gorilla and past lives. Instead, viewers are forced to endure a new subplot about a tiger skulking around the neighboring villages. Dan is asked to nab this big cat, who, like "Africa", is played by various bits of stock footage. In fact, astute viewers will quickly recognize that the "tiger" Dan seeks is truly a rare creature: he can easily bounce between different ages, heights and weights in the blink of an eye! No wonder the great white hunter can't catch this kitty.

Left behind while hubby and his natives are out hunting, Laura gets bored and decides to go for a walk in the jungle. Naturally, she soon encounters the many edited pieces of tiger film and starts screaming like a dental drill. The celluloid tiger chases Laura off a cliff and she suffers a nasty bump on her head. Don't you hate it when that happens?

Carted back to her tent, Laura is tended by Dan and his loyal houseboy Taro (Johnny Roth, a white actor dipped in Quick Tanning Syrup. He also speaks in broken English). It is Taro who assures "Bwana" that he knows a "short cut" through the jungle, the better to find a doctor for Laura. Dan agrees to let him go and Taro sets off. I don't believe his "short cut" was that successful because Taro is never seen again. Meanwhile, Dan, satisfied that his wife is OK, decides to have a sponge bath. Shirtless Dan and shirtless Taro wonder if Laura's past life as a gorilla will be considered a pre-existing condition.

Completely absorbed in this activity, Dan fails to notice that a gorilla has waddled into their camp site. Laura, however, senses the big ape's presence and gets out of bed to greet the critter. The gorilla is just about to gather Laura up in his arms when Dan screams, "Laura! No!" This leads to a husband vs. gorilla duel over Laura, and three guesses as to who wins (hint: it isn't Dan). In fact, the gorilla floors Dan with a mean right hook (or paw). He then carries Laura back to his cave, where the gorilla introduces her to all the other gorillas, who instantly accept her as one of their own. Laura seems at home, too.

Hours later, Dan arrives to retrieve his wife. He shoots two gorillas that were mingling outside the family cave, but he's yet again no match for the gorillas inside. While Laura (clad in only her nightie) sits passively on a rock, the gorillas pummel Dan into unconsciousness. Then they grab Laura and head off for parts unknown.

When Dan comes to, he's back in the US of A, in his mansion, recounting this uproarious turn of events for Dr. Reiner. 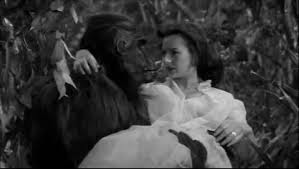 In the World According to Ed Wood, where suburban bobby-soxers rob gas stations for kicks ("The Violent Years"), where mad scientists dump bodies in swamps where they are eaten by octopuses ("The Bride of the Monster") and where aliens bungle nine plans to take over the Earth ("Plan 9 from Outer Space"), a newly married gal deciding to ditch her hubby to go live with gorillas because she was once a gorilla isn't weird--it's par for the course!

Until next time movie lovers, never under estimate the power of a primate passion and SAVE THE MOVIES.