Roger Corman's "The Undead" Or This Is Your (Past) Life 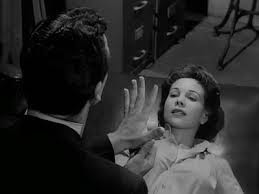 I have just experienced what may be the craziest Roger Corman movie EVER--and I can't wait to tell the world about it!

Released in 1956 and shot on a relatively lavish (for Roger Corman) budget of $70,000, "The Undead" is an uproarious tale with something for everyone: hypnosis, reincarnation, time travel, witches, true love and hookers. Ping-ponging between the present and "the second year in the reign of King Mark", "The Undead" showcases such Corman cronies as Bruno Vesota, Dick Miller and Allison Hays. Cavorting alongside them are Billy Barty (as an imp), Richard Devon as Satan (complete with a pitchfork) and props left over from Corman's last feature, "It Conquered the World."

Topping it all off: "The Undead" was filmed in 6 days in an abandoned grocery store--and half the dialog is in iambic pentameter and blank verse! 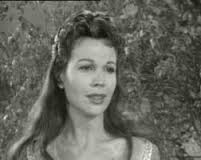 "Downward Mobility": Diana Love begins her many lives as a noble woman but ends up a hooker.

When a flick is as nutty as squirrel scat, it must be savored and cherished. Cheesy goodness like "The Undead" doesn't come along everyday--so prepare yourself for a multi-course Velveeta banquet lovingly laid out by your friend and mine, Roger Corman.

Diana Love (Pamela Duncan) is a gum popping hooker out on a midnight "stroll". Then she's picked up by snooty psychiatrist/budding psychic Quintus Ratcliff (Val Dufour), who makes her an usual proposition: for $500 bucks, will Diana allow him to hypnotize her to see if she's ever lived before?

Diana agrees (after all, this can't be the weirdest thing a client has asked her to do). While Ratcliff's stuffy former professor Mr. Olinger (Maurice Manson) looks on, Diana travels back in time until she reaches the "second year in the reign of King Mark." It's here we learn Diana was once a noble woman named Helene, falsely accused of witchcraft. She's currently chained up in a dungeon, waiting to be executed in the morning.

Fighting hard for Helene's freedom is her devoted cuddlemate Pendragon (Richard Garland)--who is possibly the dumbest knight to be found anywhere. Unfortunately, his willingness to save his sweetie does not sit well with Livia (Allison Hays, future star of "Attack of the 50 Foot Woman").

And who is Livia, you ask? She's a REAL witch, and damn proud of it! She's the one who actually did the bewitching Helene is jailed for. Livia has the hots for Pendragon, naturally, and never misses an opportunity to throw herself at him. As Pendragon thinks only of Helene, this becomes a rather futile past-time on her part. Finally fed up with his repeated rebuffs, Livia decides she will trick Pendragon into selling his soul to the devil at the upcoming "Witch's Sabbath." When the not-too-bright-knight realizes he's been had, it will be too late, and Livia will have her revenge...or something. 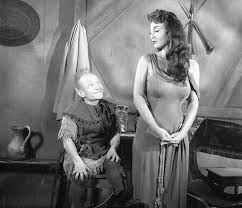 While all this is going on, Diana manages to inadvertently make psychic contact with Helene; she even helps her escape from the castle. On the surface, that doesn't seem like a bad thing. Quintus, however, blows a gasket when he finds out. Why? Because the present cannot interfere with the past! If the past is tampered with in even the SLIGHTEST way, it will irrevocably harm the future! As awful as it sounds, the innocent Helene MUST die or Diana (and all her other incarnations) will never live. So how will the people of 1956 ensure Helene dies on schedule?

Easy! Quintus, who has always yearned to travel back in time, will journey to "the second year in the reign of King Mark". Once there, he will set everything right and make it back in time for Diana to safely wake up from her trance. The particulars of how the smug psychic will manage this are never really explained; however, a major part of the process requires Ratcliff to be nude.

Still with me? Good. Because "The Undead" has still more subplots to roll out.

OK. Helene escapes from the dungeon and runs straight into a fog-shrouded forest, castle guards at her heels. It's in this fog-shrouded forest that we meet Smolkin (Mel Welles), the local grave digger. He's carting around a corpse and singing weird songs like this to pass the time: "Three witches have heads/But they'll sever them all/The head of Helene/ Is the third that must fall/ All the king's horses/And all the king's men/Cannot put the witches together again." Preoccupied by his singing, Smolkin doesn't notice when Helene crawls into the casket to hide. Shortly thereafter, castle guards arrive and insist Smolkin open the casket to ensure the corpse is indeed a stiff. As plucky Helene has hidden herself under the body, the guards are easily fooled (it could also be that the guards are just very stupid). Anyway, everybody goes about their business until Helene can't stand being squished under a dead body any longer. She makes such a ruckus that Smolkin opens the coffin and out she pops.

Smolkin, by the way, is the fellow Helene is falsely accused of bewitching. The kicker? He can't remember that it was Livia who bewitched him because, well, he's bewitched. Never the less, Smolkin tells Helene to hide in the house of Meg-Maud (Dorothy Neumann). Who is Meg-Maud? She's a shriveled up old hag with a raspy voice and a wart on the end of her (fake) pointy nose. Is she a witch, too? No. I mean, yes--but a nice witch. She won't resort to dirty pool, even when challenged by bad witch Livia. "Try every trick you know! I will vanquish thee and do it in my sleep!" Livia rails, calling Meg-Maud a "twisted copy of a wizardess" to boot.

Meg-Maud, who is no shrinking violent herself, snaps back, "Sleep not while I'm awake! Thine sleep is coming, in the sulfurous pit!" 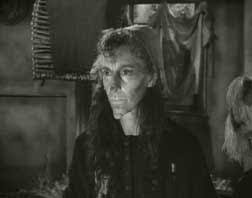 "Which witch is which?": Meg-Maud (Dorothy Neumann) ponders her next move.

Although the principal action in "The Undead" supposedly takes place in the deep, dark heart of a fog-shrouded forest, this place is absolutely crawling with people: bewitched grave diggers, noble women, palace guards, nice witches, bad witches, imps (really only one imp, played by Billy Barty in short pants and a pointy nose), knights and a nude psychic from 1956. Of course, things will only get more crowded when the "Witch's Sabbath" gets underway at midnight. Can you stand it?

At midnight, a rag-tag group of losers stagger on camera (including Dick Miller, a Corman favorite, as a leper), awaiting the "Witch's Sabbath." In a puff of smoke, Satan (Richard Devon) appears and grandly announces, "Welcome, folk of judgment! You come to pledge your service to your lord!" Sensing the crowd is listless and depressed, the Author of All Lies declares, "Give my people song and dance and gaiety! Bid the dancers appear!" Suddenly three gals, all decked out to look like Vampira, magically emerge. Their dance routine is a real doozy: the gals leap in the air, do the splits, wave their arms and toss their heads to and fro. Despite the trio's best efforts to energize the crowd, the attendees remain unmoved. Old Scratch wisely decides to move things along.

This is where Livia presses dumb-as-dirt Pendragon to sell his soul, claiming that doing so will help the imprisoned Helene. He's stopped in the nick of time by Quintus (who has since found some clothes) who reveals that Helene is not imprisoned and is in fact cooling her heels at Meg-Maud's. This causes--quite literally--for all hell to break loose, as Pendragon rushes back to Meg-Maud's and Livia and her imp try to stop him. Fortunately, Quintus stabs Livia and she turns into a dead black cat.

It's at Meg-Maud's shack that Helene learns about all her past lives. She freaks out, however, when she's told she must off herself in order to set time and history right. After her hissy fit, Helene gets a grip and realizes what she must do. Bright and early the next morning, Helene calmly presents herself to the executioner. He chops her block off and history is set right.

Back in 1956, Diana wakes up rested and refreshed. She tells Olinger that meeting Helene has made her a better person. "She gave up so much for me," Diana says. "She left me a whole new life." Unfortunately, things don't work out as well for Quintus. See, the devil encouraged the snooty psychic to stick around and watch Helen's execution--but neglected to tell him (on purpose!) that Helene's death will sever "the link" between the two women. Without that "link" Quintas will not be able to return to the 20th century. "Thy voyage to this age was down a long, long road," Lucifer gloats. "Diana to Helene...no longer is there any road for thee to take!" 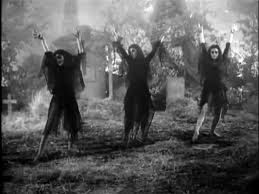 "Dancing in the Dark": Satan's opening act for the "Witch's Sabbath" shake their booties.

On that cheery note, the devil laughs and says he looks forward to seeing Quintus when he's dead. Considering how unsanitary and germ infested the middle ages are, that should be very soon.

All together now: whew!

When you watch a movie as bat-shit crazy as "The Undead", you can't help but be impressed. In six days, in an abandoned grocery story, for $70,000 bucks, Roger Corman and company crafted a time traveling tale involving hypnosis, witches, imps, dancing ghouls and a nude psychic. Sure, language purists will blanch at the uneven (and unmetered) iambic pentameter and blank verse delivered in 45%  of the flick, but how else would audiences get exposure to such gems as "hell hag", "demoness" and "wizardess"? Perhaps the best line in the film is uttered by witch Livia, who barks at chubby inn keeper Bruno Vesota, "Rest thy corpulence!"

This kind of off-kilter creativity can only happen when people have to the total freedom to go for broke, where they have nothing to lose. And that's one of the true hallmarks of Junk Cinema. It's a world where anything can happen and usually does. A hooker time travels and learns she was once a noble woman falsely accused of witchcraft? Sure, why not! A witch and an imp need to turn into bats? Haul out the bats from "It Conquered the World" and dangle them from fishing poles! Problem solved! The movie's bad girl is dressed in a gown where you can see the zipper? OK, there were no zippers in the middle ages, but there was no King Mark either! Don't be so picky! 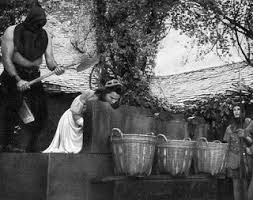 "This won't hurt a bit...": Noble Helene sacrifices herself so she can live another day.

Until next time, remember that you can't live in the past, and SAVE THE MOVIES!