"Rattlers" Or Watch Out For Snakes! 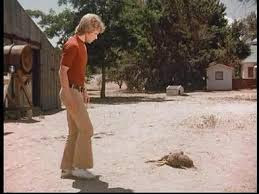 Our featured flick for today opens with two tow-headed boys climbing up a craggy cliff and then sliding feet-first into a nest of nasty rattlesnakes. The rattlers bite the hell out of the kids, who promptly die.

Of course, the rattlers might not have been so vicious if crazy-as-a-loon Colonel Stroud hadn't secretly dumped all that nerve gas down that abandoned mine shaft where the critters lived, gosh darn it!

That's the message, anyway, of "Rattlers", a low budget, dumber-than-dirt "eco-thriller" from 1976.

Perhaps it was a symptom of the upheavals besetting the nation, but 1970's cinema was bursting with flicks about Mother Nature run amok. Alongside "Rattlers", there was "The Swarm" (about killer bees), "Frogs" (about rabid pond life), "Night of the Lepus" (about deadly king-sized bunnies), "Food of the Gods" (about king-sized rats), "Grizzly" (about an unhinged bear), "The Prophecy" (about an evil bear spirit), "Empire of the Ants" (featuring a pre-"Dynasty" Joan Collins), "The Great Spider Invasion" (reviewed on this very blog) and countless yarns about marauding fish, squids, whales, sharks, octopuses and rabies-infected raccoons. 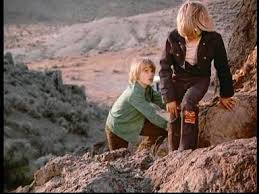 What's more, these flicks were made for both the big and small screen, so viewers weary of such tales could find little relief.

The basics of this genre were simple: a seemingly idyllic community is plagued by a series of unexplained deaths, that arouse the suspicions of the police/forest rangers/neighborhood scientists/community college professors. The apparatchiks of City Hall dismiss fears of impending doom, mainly because they have been secretly and/or illegally polluting/dumping/spraying etc. behind their constituents' backs for years--and making a nice tax-free profit, too. When concerned citizens try to investigate, they are thwarted at every turn, right up until the crisis threatens the entire planet. A big explosion and/or showdown is required before the blood thirsty fish/turtles/ants etc. are stopped in their tracks. The films often ended on an ambiguous note, suggesting that perhaps Mother Nature was merely regrouping to fight another day.

"Rattlers" slavishly follows this format to a "T." However, the filmmakers did try to layer in subplots about pushy women's libbers, desperate divorcees and an opposites-attract romance to enliven the tedium.

Let's now meet our cast, for whom appearing in "Rattlers" would be the highlight of their respective careers:

*Sam Chew, Jr. is Dr. Tom Parkinson, the film's nominal hero. A herpetologist and aggressive wearer of leisure suits and turtle necks, Tom is brought in by the local law to advise on the sudden rash of rattlesnake bite deaths. 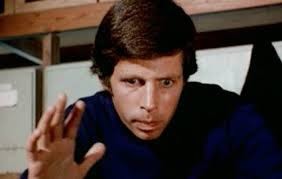 "Watch out for snakes!": Dr. Parkinson (Sam Chew, Jr.) gets in a round of freeze-tag before his herpetology duties begin.

*Elisabeth Chauvet is Ann Bradley, a combat photographer assigned to document Dr. Parkinson's investigation. A pushy "women's libber", Ann complains constantly that "all the good jobs" in her field are taken by men. Tom disagrees, pointing out all the nurses in the emergency room seem happy, so why isn't she? The duo fight the battle of the sexes for a good chunk of the film until they start sharing a sleeping bag later on.

*Dan Priest is bat-shit-crazy Col. Stroud, whose beloved nerve gas was found too lethal to use in Vietnam. He then secretly dumps the stuff down an abandoned mine shift, where it proceeds to infect the local rattlesnake population, making the uppity little buggers nastier than usual.

*Ronald Gold is Capt. Delaney, an army doctor and full time lush. He knows all about Col. Stroud's dirty little secret, but is A) too drunk to do anything and B) is being blackmailed by Stroud to make sure he doesn't do anything (something about Delaney having a DUI).

*Scott McCartor is Rick, a local farm boy sent by his ma to fetch pa for supper, only to be besieged by rattlers. When Rick falls to his death (don't ask), he accidentally sets the barn on fire and soon the air is scented with fried rattlesnake.

*Jo Jordan is the (unnamed) local divorcee, still bitter about her ex and struggling to raise her bratty kids on insufficient alimony checks. "All I want is to make enough money to leave this town!" Jordan grouses, a bit of foreshadowing that signals her doom. 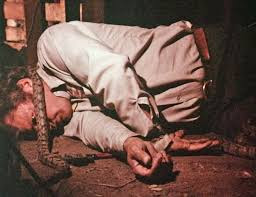 "Watch out for snakes!": The whimsically named Tipp McClure ("The Plumber") did not watch for snakes.

*Tipp McClure (don't you love his name?!) is "The Plumber." He's called to Jo's house when the hot water goes out. To escape her constant bitching about her lousy ex-husband and shitty post-divorce life, Tipp crawls underneath her track house, where he is attacked by a posse of rattlers. The reptiles then shimmy up the drain pipe to the surprise of Jo, who is taking a bubble bath.

The fate of a movie like "Rattlers" would be to spend the rest of its days gathering dust on a forgotten shelf. Then something wonderful happened.

This is where I leave you, movie lovers. Please remember to SAVE THE MOVIES and, of course, WATCH OUT FOR SNAKES! 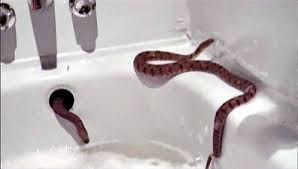 "Watch out for snakes!"
Author's note: In case you're wondering why the line "Watch out for snakes!" is repeatedly used in the captions for the pictures, it's a key piece of dialog from "Eegah!"--uttered out loud for no reason at all. It's my little inside joke, get it? Thank you and good night.