Size Matters In "War Of The Colossal Beast"

"Nuclear fallout makes you ugly": The unfortunate Glenn Manning in the unfortunate not-quite-a-sequel sequel "War of the Colossal Beast."

Look! Up in the sky! It's a bird! It's a plane! It's the Amazing Colossal Man!

Good for you! "The Amazing Colossal Man" is a horrible movie. But that didn't stop Bert I. from writing, producing and directing a sequel titled "War of the Colossal Beast"(1958), which, by strange coincidence, is also a horrible movie!

Now, I know what you're thinking: "Why is the sequel to 'The Amazing Colossal Man' called 'War of the Colossal Beast'?" Well, Bert I. wanted to do a sequel that wouldn't appear to be a sequel. So he gave his movie a different title, hoping people wouldn't realize it was a sequel...until it was too late. Then he hired a different actor to play Col. Glenn Manning, the poor guy caught in an atomic bomb blast who shoots up 60 feet. Director Gordon had this actor plastered in ugly make-up, hoping that by doing so the audience wouldn't realize a different fellow was playing Glenn...until it was too late. That's why "War of the Colossal Beast" is called "War of the Colossal Beast" and not "The Amazing Colossal Man: Bigger, Badder and Balder Than Ever". Everybody understand? Good. Let's move on. 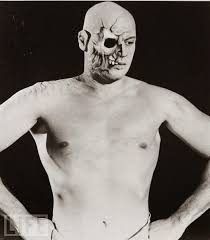 It's a bright sunny day near the Mexican/United States border and a delivery truck is flying along at a break-neck pace. The driver is a young man named Miguel and he's terrified out of his wits. Suddenly his truck crashes and Miguel stumbles from the wreckage. Then he screams and faints as the scene fades to black...

Several days later, hard-charging John Swanson (George Becwar) stomps into the police station of Miguel's home town of Guavas, Mexico. He had hired Miguel to drive a delivery truck full of supplies over to his hunting lodge, but the fellow has disappeared. What gives?

Kindly Sgt. Murillo (Rico Alaniz) informs Swanson that Miguel was found in a state of shock and brought to the near-by hospital. Unfortunately, the blustery gringo could care less about Miguel's mental health; he wants to know what happened to his truck. Alas, the Sargent found no evidence of such a vehicle, causing Swanson to leave in a huff--an ugly attitude that doesn't help anybody, by the way.

Meanwhile, along the US/Mexican border, delivery trucks are disappearing at an alarming rate. What's up with that?

News of the missing delivery trucks piques the interest of Joyce Manning (Sally Fraser). She's Glenn's kid sister and stubbornly refuses to believe he's dead. She arranges a meeting with both Swanson and the stolid Maj. Mark Baird (Roger Price) to see if they can help find her behemoth of a brother. Unfortunately, all Swanson wants to do is drink and bitch about how the insurance company won't reimburse him for his missing truck. Baird, on the other hand, seems more interested in scoring a date with Joyce (she wisely turns him down). After the gentlemen depart, Joyce heads down to Guavas to confer with kindly Sgt. Murillo. 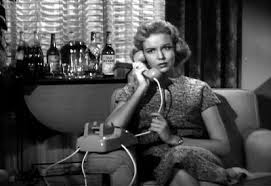 Fortified by a generous supply of hooch, Sally Fraser (as Joyce Manning) summons the courage to beg her agent to get her out of "War of the Colossal Beast".

When Joyce arrives in town, poor Miguel is having one of his screaming fits. Kindly Sgt. Murillo recognizes the words "giant" and "ogre" in Miguel's rant, which means he spotted you-know-who. Together with Maj. Baird, specialist Dr. Carmichael (Russ Bender), Joyce and kindly Sgt. Murillo head to the hills in search of Glenn. When they find a huge footprint in the mud, Dr. Carmichael (a real wet blanket) surmises that such an imprint could only be made by someone "about 60 feet tall."

In fact, when Maj. Baird and Joyce return to the mountains later, they not only find the remains of all the delivery trucks Glenn had been poaching, they find Glenn, too. He's still bald as a billiard ball, but one side of his face has caved in, exposing buck teeth and an eye-socket minus a peeper. His shoulder also sports a nasty scar. Psychologically, poor Glenn has been reduced to grunting and growling like a rabid Doberman to express his needs. On the plus side, his diet of delivery food has not played havoc with his figure and his sarong appears in good repair.

To capture the massive major, the military loads a truck with doped-up French bread. Kindly Sgt. Murillo drives the truck, with Baird and Carmichael riding shot-gun. When the doctor complains about his fast pace, kindly Sgt. Murillo reminds him, "Giants can run fast. They have long legs!"

And big feet. After the men bail out of the truck, Glenn appears and gobbles up the laced bread. Then he spots the trio hiding behind a rock. Glenn staggers off after them, squishing kindly Sgt. Murillo flat as a pancake (eww) before collapsing in a heap. 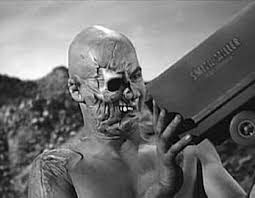 What follows next is a tiresome procedural where various branches of the US government bicker over who should take responsibility for the care and feeding of Glenn, currently residing chained up in an airplane hanger. It's eventually decided Glenn should be transported to a deserted island, where he will live out his days communing with nature and eating food sent over by the military. Sister Joyce, of course, is not happy about this. Maj. Baird, still trying to get to first base, reminds Miss Manning that her brother is now a huge, radiation-scarred hell beast not fit to live in polite society. She must understand that this is the only way.

Alas, Glenn proves this is the only way after he escapes from captivity and thrashes over to the Griffith Park Observatory. It's there he encounters a school bus filled with bratty junior high kids on a field trip. While crowds gasp, flood lights stream and cops shoot hails of bullets, Glenn grunts and shakes the bus in mid-air, furious that it's filled with screaming teenyboppers and not food.

Just when it looks like all is lost, Glenn has an epiphany. He puts the bus down. He realizes what he has become and he's ashamed. To ensure he will never harm another delivery truck again, Glenn electrocutes himself and falls with a big boom. The "War of the Colossal Beast" is finally over, except for the credits...and the blame.

And the blame for "War of the Colossal Beast" falls squarely on the shoulders of Bert I. himself. 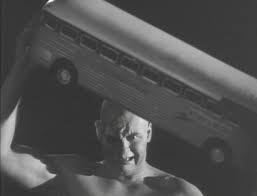 "The wheels on the bus go round and round...": Colossal Beast Glenn Manning gives some school kids a lift. Literally.

Taken individually, any one of these elements can wreck a movie.

Yet Bert I. was able to seamlessly blend them all into one souffle' of suckiness by adding one more vital element into the mix: incompetence!

And that's something you're born with; it can't be learned.

Bert I. made 21 movies in his fabled career and they all suck on toast. From "The Amazing Colossal Man" to "The Beginning of the End" to "Empire of the Ants", Bert's flicks were always about nuclear fall-out, big rogue critters, stock footage, military protocols and the eventual demise of a big thing-a-ma-bob. He never felt the need to branch out from beyond this self-imposed cinematic template and, if that made him happy, who are we to argue? 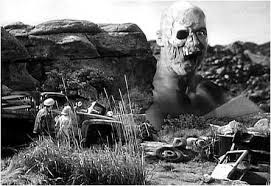 So movie lovers, please eat your bread and help me SAVE THE MOVIES.