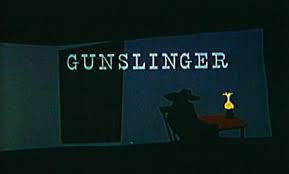 Morning dawns bright and early in Oracle, Texas. Birds are chirping and clouds are parting. Making her way to the sheriff's office is Rose Hood (Beverly Garland), happily delivering breakfast to her lawman hubby Scott (veteran character actor William Schallert). While the couple quietly discuss the events of the day, shots suddenly ring out and the sheriff falls to the floor. Rose quickly grabs a gun and gives chase, but the baddies ride away. Returning to her husband's side, Rose puts her head in her hands when she realizes he's dead.

If that gal is Beverly Garland, she'll pin on her fallen husband's sheriff badge and bring her husband's killers to justice herself!

Welcome to "Gunslinger" (1956), a wild and woolly take on how the west was won, according to America's premiere "Budget Gourmet" filmmaker Roger Corman.

Utilizing four sets (which you might recognize from "The Undead"), employing his usual stock company of actors and shooting the entire thing in six days, "Gunslinger" is a tangled tale of revenge, ill-fated love, land speculation, murder-for-hire and a rowdy saloon that refuses to obey the curfew law. Anchoring the whole shootin' match is Beverly Garland, the blondest sheriff in the west. 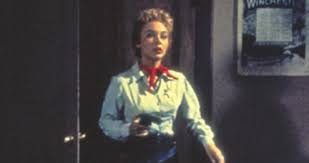 Although Mayor Polk (Martin Kingsley) has sent for "legendary lawman Sam Bass" to be Oracle's new sheriff, the widowed Rose feels his arrival will be too late to find her husband's killers. When all the able menfolk in town refuse to be sheriff in the interim, Rose takes the job.

"I think it's a wonderful idea!" meows Erica Paige (Allison Hays), owner of the randy Red Dog Saloon, which refuses to obey the curfew law. "Oracle will be the hit of the western dime novels! And what bad man would shoot a lady?!"

"I reckon people won't think it proper for a new widow to go around in pants, even if they are black," he frets.

"Ever see a peace officer in a corset?" Rose replies, before adding, "Come on, Joshua! Let's start enforcing the law!" 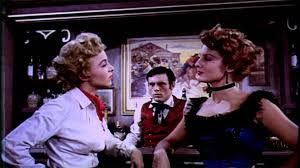 Their first stop is the Red Dog Saloon, the local dive where Erica Paige holds court. On this particular evening, Little Man (Jonathan Haze), Erica's devoted but demented lackey, is tending bar while a bevy of chorus girls shimmy for the excited male patrons. Meanwhile, Mayor Polk is playing cards and regaling his chums with stories about fighting alongside Bedford Forest. All this frenetic merrymaking comes to a screeching halt when sheriff Rose and deputy Joshua enter.

After reminding everyone Oracle has a 3 PM curfew law, Rose instructs Erica, "Empty your house and put out the lights."

So Rose shoots out one of Erica's lights, which touches off a raucous hair pulling, chair smashing, table collapsing, face slapping fight between the sheriff and the saloon diva. Not to be left out, deputy Joshua and Little Man (also known as Jake) trade punches before the doughy Joshua throws Little Man over the saloon bar. Rose then levels Erica with a nasty right hook. While the stunned patrons look on, Rose barks, "Everybody who can walk get out!"

From then on, the Red Dog Saloon closes promptly at 3 PM, no questions asked.

While Little Man massages Erica's sore neck, the saloon diva decides she needs to take Rose out. So she sends her highly excitable lackey off to find a hired gun to do the job. In the meantime, Rose is busy cleaning up Oracle, busting bank robbers, detaining drunks and even ordering the Red Dog's showgirls out of town (they constitute "an immoral influence" on the town's young people). Law and order may have made Oracle safe for decent people, but it sure is dull for everybody else.

Then Mayor Polk waddles into into the Red Dog (after closing time, of course) to chat with Erica. In one of the "Gunslinger"s may sub-plots, the rail road is thinking of building a depot in town. Nobody knows for sure, of course, but that hasn't stopped crafty Erica  from buying up tracks of land--from owners who later wind up dead. Turns out Erica's property is where the railroad would lay its tracks. Mayor Polk cautions Erica that her tactics are "the height of speculative gambling" (and illegal).

"You're brilliant," she yawns.

The mayor also points out that the people of Oracle "won't take too kindly" to a saloon gal cleaning up from such dirty dealings.

"Sometimes I lay awake two or three seconds thinking about it," Erica sneers. 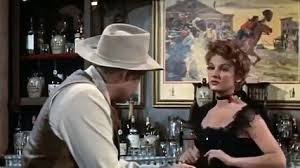 "I have a head for business and a bod for sin": Erica explains how to make a killing in real estate to Mayor Polk (hint: knock-off your competition).

Now, remember, the hired gun Erica sent Little Man to find? He arrives in the strutting form of Cane Muro (John Ireland). Before he and Erica agree to terms, Cane and Rose meet on the outskirts of Oracle, where Rose is tracking a baddie. The two hit it off and begin a tentative romance that is only slightly hampered by the fact that Cane has been hired to kill Rose.

Oh, did I forget to mention that Cane and Erica were once an item? Or that Cane only took the job to bump off Rose because it would lead him to Mayor Polk? Or that Cane blames the mayor for the death of his brothers and the loss of the Civil War? Or that Cane really wants to kill Mayor Polk and not Rose? And that the conflict between what he wants to do and what he's been hired to do is driving Cane to drink?

Are you keeping all this straight?

As a rule, westerns usually end with a big shoot out and "Gunslinger" does not disappoint. However, our featured flick may be the western in the history of the universe where an entire town is nearly killed. See if you can follow along:

Erica and Cane get up bright and early one morning to meet the Pony Express rider who is carrying the official document that states if the railroad is coming to Oracle. It's not. In a fit of pique, Erica shoots the rider. Then she and Cane head back to town. 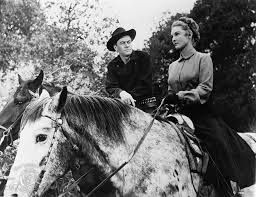 "Partners in Crime": Cane Muro (John Ireland) and Erica prepare for a shoot-out.

Cane has declared his intention to shoot Mayor Polk, but the poor fellow has no gun at the moment. So the mayor's wife goes off to find him one. Instead, she returns with a pitchfork and is promptly shot dead. Cane then shoots to mayor, who finds a pitchfork little use against a gun.

On the streets of Oracle, Erica hunts down and is about to shoot Rose, but Cane shoots Erica instead. He then hops on his horse and heads to Nine Mile Canyon, with Rose in hot pursuit.

Hunkered down on opposite sides of the canyon, Rose and Cane shoot at each other, stopping long enough to reload and discuss their relationship.

"Yes, it was a two-way thing," Rose reassures Cane, before she blows his brains out. 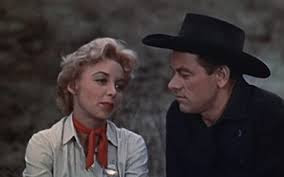 Isn't it a total bummer when you meet a nice guy and you think 'maybe this will work out' and he turns out to be a hired gun sent to kill you? Don't you hate that?

The heartbroken Rose eventually drags Cane's body back to town. She tells deputy Joshua she's leaving, pronto, and asks him to put her trunks on the next stage coach. As Rose rides off into the sunset, Sam Bass arrives in town, marveling at how quiet--dead quiet--Oracle is. 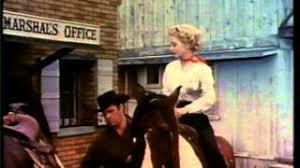 Her work done, Sheriff Rose Hood decides to get out of Dodge (actually, Oracle).

As Sheriff Rose Hood, Bev is smart, capable and strong.She never buckles. Even in her love for Cane Muro, Rose knows the score. "You aren't bad," Rose tells him at one point. "You're just no good." Later, on the eve of their big shoot out, Rose informs Cane, "We're sworn enemies, you and I, and all the moonlight in heaven can't change that."

See, Rose has sworn to hold up the law. If that means gunning down her boyfriend, so be it. It won't be easy, but Rose Hood will do what's right, case closed.

Bev showed just as much grit behind the scenes of "Gunslinger" as she did on. When she was required to jump on her horse, Bev over-shot her mark and wrenched her ankle. The ankle swelled up, forcing the prop man to cut her boot apart and tape Bev's foot inside the shoe. Once shooting was done, Bev couldn't walk for two weeks.

The scene with Cane and Rose whispering sweet nothings in a tree also proved problematic. The scene was shot a six in the morning and, according to Beverly Garland, it was so cold she and John Ireland's teeth started to chatter. What's more, the tree was home to a nest of Fire Ants, who proceeded to bite and sting the actors throughout their takes. But troupers Bev and John made it work!

Although Roger Corman never met a shooting schedule he found too short, the director had a real reason to get "Gunslinger" in the can in six days. New union rules were about to go into effect that would have required actors to have a mandatory day off after five days of shooting. Cost cutting Corman, therefore, wanted his latest production finished before this happened. That meant filming went on despite rain, Fire Ants, mud, obvious tire tracks, Bev's swollen ankle and Allison Hays' broken arm (she fell off her horse, too). 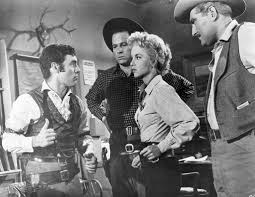 Until next time movie lovers, please always remember that while it took our Lord God seven days to make the Earth and the Heavens, it only took Roger Corman six days to make a full length western. And please help me to SAVE THE MOVIES, too.