"Land Of The Pharaohs" Is A Real Pyramid Scheme 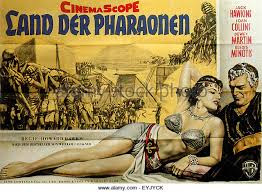 "Land of the Pharaohs" German movie poster. As I've always said, "Trash is the universal language!"

How bad can a movie be if William Faulkner writes the script and Howard Hawks directs?

"Land of the Pharaohs" (1955) is a big, gaudy, silly, occasionally ponderous soap opera (in CinemaScope!) where the actors behave less like historical personages and more like participants in a hormone experiment. 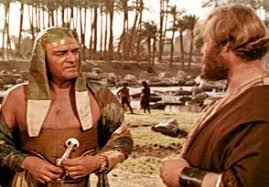 Jack Hawkins is Egypt's mightiest pharaoh and most demanding client.

"The barbarous love that left Egypt's great pyramid as it's wondrous landmark!" screamed the movie's ads. "The world of  (a) king...crashing to bits on the soft lips of (a) concubine for whom the seven sins were not enough!"

See what I mean?

How about a 22-year old contract player (and Royal Academy of Dramatic Arts student) named Joan Collins, future star of "Dynasty" and Dame of the British Empire?

As the female lead in "Land of the Pharaohs", Joan sashays around like the diva she is, flaring her nostrils, arching her eyebrows, hissing like a snake and chewing the Grade A-fat with gusto. She's not only the movie's liveliest character, she appears to be the only one having any fun. Too bad she doesn't arrive on the scene until about 45 minutes into the picture.

The lead float in the Rose Bowl Parade? Nope, it's just Pharaoh Khufu vising the building site of his super pyramid.

Until then, viewers must make do with the gravel-voiced Jack Hawkins as Egypt's mightiest pharaoh, Khufu. Sure, he's rich and all-powerful, but is he satisfied? Of course not! All the pharaoh can do is obsess about building the world's greatest pyramid and stocking it with the world's greatest assortment of treasure, thus ensuring that his "after life" will be as lavish and comfy as his current one.

To achieve this, pharaoh strong arms various architects, builders, masons and slaves to toil away on his dream project. "Land of the Pharaohs" thus crawls at a snail's pace while Hawkins endlessly dickers with his staff over design plans, materials and safety features. He even complains about the sand. "Why can't we do away with the desert?!" Hawkins sputters. After enduring these tiresome vignettes, you begin think you've stumbled onto the most contentious "Property Brothers" episode ever.

Anyway, constructing the world's greatest pyramid doesn't come cheap, so the pharaoh demands various "tributes" from the lands he presides over. This, in turn, puts a considerable crimp on the already over-extended local populations responsible for these "tributes". This is when Joan shows up.

She's Princess Nellifer, ambassador from Cypress. Her initial introduction to the pharaoh and his court doesn't go well. See, when Nellifer's name is called, she's reapplying her lipstick and makes everyone wait. Then she declares that the "tribute" demanded of Cypress is too great--so her father has sent her as the replacement.

This cuts no ice with the pharaoh, who insists that Cypress fork over its assigned "tribute" AND allow him to keep Nellifer. Joan boldly tells Hawkins he can have one or the other, but NOT both. Unaccustomed to any back talk, pharaoh orders Joan to be whipped.

Bloodied but but unbowed, Joan is later dragged back to face Hawkins. "Education is painful, isn't it?" the pharaoh sneers. In response, Nellifer bites the king and seethes, "Don't ever touch me again!"

Despite their mutual antipathy, the pharaoh and the princess have a certain "chemistry" and soon all is forgotten. In fact, the pharaoh decides to marry Joan and make her his second string wife. This makes Nellifer pleased as punch--especially when she tours hubby's super deluxe pyramid and gets a gander at his golden goodies.

Boy, could Nellifer make use of all that treasure!

However, Hawkins makes it perfectly clear that the treasure glittering before wife number two is strictly for HIS benefit and no one else's. Hands off!

It's going to take more than a stern warning from Hawkins to keep Nellifer from getting what she wants. Eventually she realizes that the easiest path to the pharaoh's treasure is through his first wife and their pesky kid.

So Joan plays besties wife #1 and presents the heir to the throne with a cute flute. She even teaches him to play a sprightly tune...with attracts cobras. One evening junior is busy playing away and a nasty cobra slithers out from under the bushes. Luckily mom sees the snake and throws herself on top of it.

It's never explained if junior dies, too, but he disappears from the rest of the movie, so I guess that means he did. Or he went to camp. I don't know.

Now upgraded to #1 wife status, Nellifer begins working her wiles on palace flunky Treneh (Sydney Chaplin). Inviting him to her private chambers, Joan pours them wine and pouts about how even queens "can get lonely, too." As the screen goes dark, it's clear that Treneh will make sure this queen is never lonely again.

Totally besotted with Joan, Treneh is never the less horrified when she urges him to kill the pharaoh. He refuses, but Joan uses the old "You'd do it if you loved me..." line that never fails anyone, especially in movies like this. To make a very long story short, Nellifer sends her servant to kill the pharaoh, but he totally gums up the works, which really annoys Hawkins. Then the pharaoh stumbles into his wife's boudoir and over hears Nellifer and Treneh bickering over the bungled assassination attempt. That, in turn, sparks a sword fight between the two men which doesn't end well...for them.

Now elevated to queen in her own right, Nellifer proudly strolls into her late hubby's super deluxe pyramid, which features more glint and gold than Trump Tower. It's all hers now--or so she thinks. That's because palace aide to the pharaoh has a sneaky surprise in store for Queen Nellifer, which gives new meaning to the phrase "Always have an exit strategy." 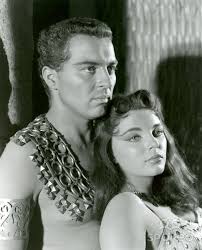 Nellifer and her patsy Treneh (Sydney Chaplin) strike a pose.

Oh, before I forget, there is a subplot in "Land of the Pharaohs" about a builder named Vashtar (James Robertson Justice) and his son Senta (the heavily pompadoured Dewey Martin). They are promised their freedom once the pyramid is built; however, as the project drags on (much like the movie) Senta gets increasingly irritated (much like the audience) that their promised deliverence may never come. Worse, pop is slowly losing his eyesight. Will he finish the pyramid before he goes blind? Will he live long enough to experience freedom? Unfortunately, the Vahtar and Senta part isn't as much fun as Joan flaring her nostrils and snorting like a dragon, so I decided not to dwell on it. You can watch it yourself, though.

After enduring such a vast slog like "Land of the Pharaohs", sensitive viewers will be left with a few questions, such as:

*How come Dewey Martin can show his belly button, but Joan Collins couldn't?

*How come Joan appears to have endured the world's worst spray tan?

*How come all the good, noble people in this movie are boring old sticks and the only person with any pep is the villain? 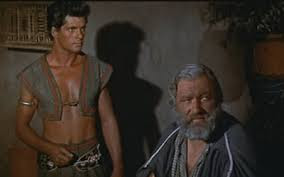 *How could a movie written by William Faulkner and directed by Howard Hawks be so bad?

As I have often said, Junk Cinema isn't only made by earnest yet incompetent amateurs with little money and less talent--although it helps. Seasoned  professionals given scads of cash and the best of everything can--and often do--create cinematic stinkers that would make Coleman Francis or Ed Wood blush.

Despite a hefty (for the day) $6 million budget, "Land of the Pharaohs" only made back a third of its investment for Warner Brothers. The flick ended up being Howard Hawks' first commercial failure and he was so bummed out that he wouldn't make another movie until 1959's "Rio Lobo". Nobel Laureate Faulkner, meanwhile, admitted that his script tanked because he tried to make an Egyptian pharaoh "sound like a Kentucky colonel." And it turns out that watching a pyramid being built is about as exciting to movie-goers as sitting in traffic on a hot day with the AC on the fritz.

The only winner here--besides bad movie fanatics-- is Joan Collins as vamp camp tramp Princess Nellifer. In fact, Joan would play a variety of versions of Nellifer throughout her career, reaching her zenith on "Dynasty" as Alexis Carrington. After a long dry spell career-wise, watching Joan strut through the various Carrington properties, biting the heads off hapless co-stars and wearing designer duds with should pads that would allow her to play tackle football, brings back fond memories of her performance in "Land of the Pharaohs". Although it was Pharaoh Khufu who dreamed of immortality, it was Princess Nellifer who proved to be eternal...at least for Joan Collins. 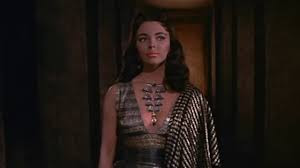 "Who's That Girl?": Princess Nellifer is ancient Egypt's answer to Alexis Carrington. Or is it the other way around?

So movie lovers, please always remember, and never forget, nations rise and fall, money comes and goes, love fades and fame is fickle. But bad movies never die--SO SAVE THEM!