"The Bad Seed" Is Bad To The Bone--So Deal With It! 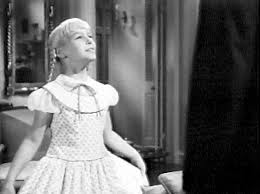 Sugar and spice and everything nice is not what this little girl is made of: Rhoda Penmark (Patty MacCormack) lays on the charm.

Based on Maxwell Anderson's hit Broadway play (which was based on William March's hit novel), "The Bad Seed" is the Grand Dame of devil baby movies, a Junk Cinema genre where everyone from Mia Farrow to Joan Collins must face the fact that their little bundle of joy is in fact a nasty, blood thirsty, evil hell-beast.

The centerpiece of "The Bad Seed" is Rhoda Penmark (Patty MacCormick), a pig-tailed paragon of perfection who is twisted enough to freak out Hannibal Lector.

Whatever Rhoda wants, Rhoda gets, even if it means offing people in some pretty gruesome ways. 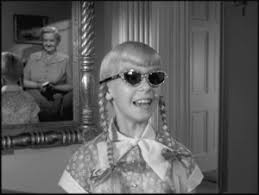 "My future's so bright, I gotta wear shades!": Rhoda shows off the lighter side of being a  sociopath.
Such as?

When an elderly neighbor hints that Rhoda will be left something fancy in her will, the old dear soon trips down a flight of stairs and breaks her neck.

Later, after a doltish handyman taunts Rhoda about the police coming to put her in the electric chair ("They got a little blue chair for little boys and a little pink chair for little girls!"), Rhoda sets him on fire while he's taking a nap.

Perhaps Rhoda's most unfortunate victim is Claude Daigle, a fellow student at her pricey private school. He had the nerve to win the penmanship medal Rhoda felt was hers. When the nerdy Claude refused to hand over the medal, Rhoda stalked him at the end-of-term picnic. Cajolery and threats failing to do the trick, Rhoda pounds on Claude with her shoe until he forks over the medal. She then chases poor Claude to near-by wharf where he drowns.

Rhoda's mom Christine (Nancy Kelly) is a posh housewife who vacuums in her pearls. However, even she is forced to admit that her beyond-perfect Rhoda isn't your typical kid: "There is a mature quality about her that is disturbing in a child." 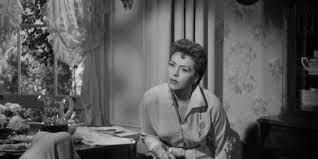 Christine Penmark (Nancy Kelly) wonders why people die whenever her daughter is around.

No kidding! Is that why none of the other kids will play with her and she's eventually kicked out of her posh school?

The death of Claude and Rhoda's no-skin-off-my-nose reaction starts to unnerve Christine; in fact, she soon realizes wherever Rhoda goes, bodies start piling up. Then Rhoda lets it slip that she never dreams at night or "feels anything." Does this suggest Rhoda maybe disturbed in some way?

Oh, and another thing: doting mom Christine has been having these weird flashbacks about her own childhood. After she presses her dad for answers, Christine learns that she was adopted. That's fine-- until the gal learns her birth mother was Bessie Denker, a sweet-faced serial killer who dispatched her victims in ways granddaughter Rhoda would admire. Seeking reassurance that Rhoda is just, you know, maybe, going through a phase, Christine asks writer Reggie Tasker (Gage Clark) if kids born to killers can be saved by "by nice family surroundings and advantages".  He's not very encouraging: "They're just bad seeds. Plain bad from the beginning and nothing can change them."

Horrified that she's responsible for transferring "the bad seed" gene to her kid ("Poor deformed children, born without pity!" mom wails), Christine decides that the only thing to do is give Rhoda an over-dose of "vitamins" (actually sleeping pills) and then shoot herself. After all, if the police found out about Rhoda's crimes, they'd arrest her, lock her up in a mental ward, probe her psyche, experiment on her--and what would the neighbors say?! It was the the 1950's, remember, and people cared very much about their reputations back then. If word got out their daughter was a sociopath, the Penmark's would never be allowed to join any decent country club. 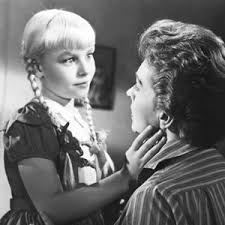 Now, this is pretty intense stuff, especially for 1956. But have no fear. The Motion Picture Production Code wasn't about to let "The Bad Seed" go that far. Instead, director/producer Mervyn LeRoy had Christine survive her gunshot wounds. Rhoda also survives her "vitamin" over-dose, but she isn't spared--unlike the play, where mom dies and Rhoda lives. Instead, Rhoda sneaks out of her flat on "a dark and stormy night" to retrieve Claude's medal, which ma Christine found and returned to the wharf. While she's fishing the trinket out of the water, Rhoda is struck by lightening and instantly killed.

But that's not all! Two seconds later, the whole cast reappears and takes a bow. Then Kelly grabs MacCormick and gives her a spanking--as if to reassure the audience, "Hey, this was only movie!"

Thanks for reminding us!

I know "The Bad Seed" has its fans. It was a big hit at the box office and earned its principal stars Oscar nominations. But that doesn't mean that the flick can't be bad. Consider these points, if you will: 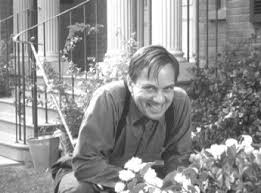 Leroy the handyman isn't nearly as scary as Rhoda Penmark.

*Nancy Kelly, as Rhoda's horrified mom, spends the entire movie either on the verge of a nervous breakdown or wetting her pants. You can appreciate her anguish, but after a while you start hoping someone will tell her to get a grip and call the police--at least take a chill pill.

*With her bone-white pigtails, frilly dresses and perfectly plucked brows, Patty MacCormack looks like she wandered off the set of "Children of the Damned". Even for the prissy '50's, Rhoda is such an over-the-top caricature of "a good little girl" that it's hard to believe people didn't think she was off her dot sooner than they did.

*Also in typical '50's fashion, the movie implies that the mothers are really to blame for all this mess. Christine's birth mother, Bessie Denker, was a serial killer. Christine, in turn, not only passed "the bad seed" on to her own kid--as if she had any control over that--she's guilty of trying cover up her child's crimes. Claude Daigle's mom (played by Eileen Heckart) is a smothering hysteric the flick hints was turning the kid into a wimp. The Penmark's landlady Monica is an annoying busybody who drops in anytime day or night. Finally, the head mistress Miss Fern at Rhoda's school is a hyper-rigid old maid who looks as if she was weaned on a pickle (to quote Alice Roosevelt). Looked at objectively from the distance of 61 years, this movie really hates women.

* And the men aren't any better! Christine's hubby is away on a business trip during these murderous events; Mr. Daigle (played by Frank Cady, best known as Sam the grocer in "Petticoat Junction") is clearly a hen-pecked husband; Christine's father, a respected journalist, won't even admit he knew his daughter's birth mother was a killer--he even threw away his research that proved it! None of them are any help.

*Then there is Henry Jones as Leroy the handyman. Landlady Monica admits that he's lazy and "mentally deficient", but somehow he managed to have kids, so she keeps him on the payroll. Is that a subtle hint that only people with certain IQs should be allowed to have kids? Or a dig about society's preconceptions over who makes the best parents? Author William March was single and childless himself, so maybe he wasn't the best person to write on this subject. 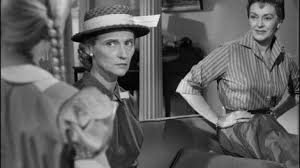 Even prissy Miss Fern is afraid of Rhoda.

In the final analysis, "The Bad Seed" is a preposterously bad movie that has long pretended to be a good movie, even a horror classic. However, just because a movie is a hit and earns itself some Oscar nominations doesn't mean it's good. Elizabeth Taylor won her first Best Actress Oscar playing an annoying, grating hooker/model in an otherwise crummy film ("Butterfield 8"). Irene Cara won an Oscar for writing the theme to "Flashdance", for pete's sake. Like little Rhoda herself, "The Bad Seed" has been pretending for far too long.

So movie lovers, please always remember, and never forget, don't judge a novel by its movie version, and, of course, SAVE THE MOVIES.