"The Magnificent Seven" 2016 Or How The West Was Undone 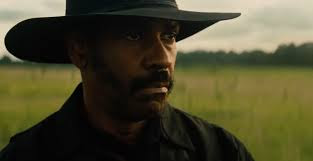 The hard workin', God fearin', Bible readin', honest-as-the-day-is-long citizens of Rose Creek have found themselves in a heap o' trouble.

See, a zonked-out robber baron with a Snidly Whiplash 'stache named Bartholomew Bogue (Peter Sarsgaard) is intent on driving them off their land. To achieve this, Bogue has employed murder, threats, murder, poison, murder, arson, murder and murder.

Fed up, the beleaguered citizens hold a town meeting in the church, where they vent their frustrations. It's clear they'll get no help from the local law, as Sheriff Harp (Dane Rhodes) is completely in Bogue's hip pocket. Then Bogue suddenly waltzes in, pausing long enough to berate the assembly, torment a child, shoot a few folks and, just for kicks, set fire to the church.

After such a horrific display of bad manners, the citizens of Rose Creek must decide whether they'll stay and fight or leave while they still can. 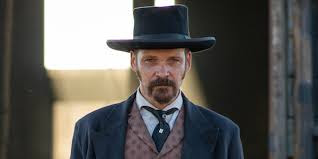 "Born to be Bad": Bartholomew Bogue (Peter Sarsgaard) in one of his more lucid moments.

Brave but bra-less widow Emma (Haley Bennett) makes it clear she intends to fight. However, she realizes her fellow yokel locals will need some help. With her pal Teddy Q (Luke Grimes) in tow, Emma ventures out to find the muscle who will rid her town of Bogue and his squinty-eye, tobacco-chewin' goons for good.

If I've said it once, I've said it a hundred times: Junk Cinema is not ONLY made by earnest yet incompetent amateurs with more dreams than talent, money or brains--although it helps. Seasoned professionals, with unlimited funds, the best technology, an A-list cast and the best catering crews in the world can still conjure up a cinematic suppository even William "One Shot" Beaudine would blanch at.

Alas, that is exactly what director Antoine Fugua has done with "The Magnificent Seven" 2016. Despite corralling the services of Denzel Washington, Chris Pratt, Ethan Hawke and Vincent D'Onofrio, among others, Fugua has created a truly wretched western, which begs the question: Antoine, sweetie, who hurt you?

For right now, though, let's get back to the movie. 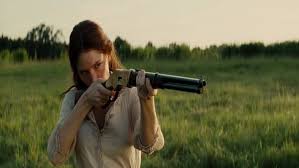 Frontier widow Emma (Haley Bennet) takes aim at the baddies who shot her husband, burned her church, kicked her dog and cast her in this movie.

Emma and Teddy Q. find what they need in the form of Chisolm (Denzel Washington), a US Marshal warrant officer (and People magazine's "Sexist Man Alive" for 1997). When widow Emma first pleads her case, Chisolm isn't interested, remarking, "You seek revenge." To which she replies, "I seek righteousness. (Pause.) But I'll take revenge."

This impresses Chisolm, who takes the job. He then briskly goes about recruiting his team: a whiskey guzzlin' Irishman with an eye for the ladies (Chris Pratt); an outlaw named Vasquez (the hunky Manuel Garcia- Rulfo), who has an opening in his otherwise busy schedule; Goodnight Robicheaux (Ethan Hawke, ex-cuddlemate of Uma Thurman), an old army buddy of Chisolm's who dresses like Buffalo Bill Cody and Billy Rocks (Byung-hun Lee), a protege of Goodnight's who has a wicked way with a knife. Later, our happy campers will be joined by tracker Jack Horne (Vincent D'Onofrio), who is missing an ear--along with a good chunk of his sanity-- and Native American Red Harvest (Martin Sensmeier), an expert with a bow-and-arrow who sports impeccable face paint.

No sooner has this motley crew arrived in Rose Creek than they are called upon to do battle with a posse of Bogue's goons. This they do with deliberate skill (and great editing), earning the tense trust of the townspeople.

As Chisolm and his merry men whip the folks of Rose Creek into shape, the guns-for-hire come to know and respect the humble frontier folk--and vice versa. What was suppose to be just another "job" thus takes on unexpected meaning for everybody.

Or so it was in the first two films. In Fuqua's 2016 version, viewers have to assume this for themselves. That's because outside of colorful costumes, personality quirks and ethnic cliches, the hired guns are given no other opportunities to develop and explore their characters. No warnings about how short and miserable the life of a hired gun really is, no impassioned speeches about how bravery isn't always found at the barrel of a gun--scenes which gave the other two films their emotional heft. The exception is Denzel, whose Chisolm is quietly powerful and a natural leader. He also nurses a secret which explains why he took up the cause of Rose Creek in the first place. Masterful actor that he is, Washington doesn't reveal this until the very end, giving his performance a pathos and gravity the other actors are denied. 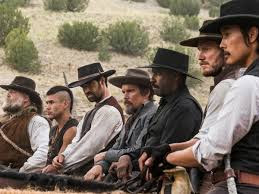 The long awaited confrontation between the citizens of Rose Creek and Bogue's army of thugs that is the centerpiece of "The Magnificent Seven" eventually arrives, with the hayseeds doing a right fine job. Trouble is, Bogue, that meanie, has a nasty surprise in the form of a Gatling Gun. Yet our unlikely heroes manage to triumph anyway. Or do they? Four of their buddies are dead. The remaining three will continue to hire themselves out until they either die or quit. Like the haunting refrain in "Desperado", they aren't free; "their prison is walking through this world all alone." As for the citizens of Rose Creek, they have their town back, but at what cost?

Unlike Kurosawa or John Sturges, director Fuqua doesn't layer any of this into his film, which is a major, major problem. To quote the late, great Roger Ebert, Fuqua knows the words, but not the music. By leaving out the heart and the emotional complexities of the tale, "The Magnificent Seven" 2016 is just a paint-by-numbers exercise in...painting-by-the-numbers.

Now, I know this movie will have it's fans and some will feel discussing it on a blog dedicated to Godzilla movies and hysterical soap operas is unfair. Fine. To defend my decision, I hereby present seven points to buttress my conviction that this movie sucks on toast:

Point One-- When the original film is an influential classic (as "The Seven Samurai" is) and it's 1960 remake is a classic (which "The Magnificent Seven" is), there is no reason on God's green earth to make a third film! It's just that simple.

Point Two--You don't assemble a cast like this and then give them NOTHING to do. It's down right criminal.

Point Three--What  was Mr. Bogue's problem, exactly? Was he a drunk, an opium addict, suffering from a STD, hooked on snuff, experiencing a bowl blockage, battling the flu, or wearing tight under things? His bleary-eyed, sweaty continence and slightly slurred speech hints that something mighty peculiar is going on--why not clue the audience in?

Point Four--Why must the only consequential female in the movie be a budget Jennifer Lawrence who struggles to keep her breasts in her bra?

Point Five--If the hired guns in "The Magnificent Seven" 2016 were thumb-nail portraits at best, the citizens of Rose Creek were cardboard cut-outs. Shouldn't the film have taken the time to introduce us to these people, to explore their plight and show why they were willing to trust their lives to a bunch of mercenaries?

Point Six--It's hinted that Ethan Hawke's character suffers from Post-Traumatic Stress Syndrome--the operative word here is hinted. Once again, the film completely bungles a chance to give a major character some depth and the plot a chance to explore the toll the life of a hired gun demands. Also, why must the Irishman always be a poetry spouting drunk? I am Irish myself , so, somebody, please, give this cliche' a rest.

Point Seven--If you're going to remake a classic that's a remake of a classic, you better have your cinematic ducks in a row. You cannot coast on the previous films' reputations or the good will of the films' many fans. Mr. Fuqua had every opportunity to make an excellent film. If or when he realized he could not bring anything new to this tale, he should have quit. Leaving movie lovers with "The Seven Samurai" and "The Magnificent Seven" is far more noble than presenting those same movie lovers with a watered-down western that wastes their time and money.

"There has got to be a cash machine around here somewhere...": The Magnificent Seven arrive on the scene.

So movie lovers, please always remember, and never forget, a classic film never ages and SAVE THE MOVIES.