Here Comes The "Bride Of The Monster"! 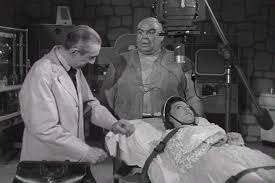 It's a dark and stormy night. Hunters Mac (Bud Osborne) and Jake (John Warren) are tramping around Lake Marsh, seeking shelter from the elements. They eventually reach "the old Willow's place", which is supposedly empty and haunted. Mac pounds on the front door and is greeted by Dr. Vornoff (Bela Lugosi). He refuses to give the men shelter and orders them away. Then the doctor's assistant Lobo (Tor Johnson) lunges at the men from behind the bushes. The terrified hunters race off into the night...

Tragedy strikes when Mac falls into a ravine and is attacked by an octopus. Yes, an octopus. Jake repeatedly shoots at the sea creature, but he fails to save his friend. Then Lobo suddenly reappears, over-powering Jake and dragging him off...

When Jake comes to, he realizes that he's been strapped to an operating table with a mixing bowl perched on his head. Dr. Vornoff, you see, has been trying to create a race of "super humans" by bombarding unwilling test subjects with "atom rays". Unfortunately, all of the doctor's previous "volunteers" have expired. Will Jake be any different? Uh, no. After Dr. Vornoff flips some switches and Jake screams bloody murder, the doctor checks his patent's pulse; Jake is dead. D'oh! Vornoff sighs a heavy sigh and tosses the poor hunter's body to his pet octopus for a midnight snack. Back to the drawing board!

OK, who would instruct an actor to pound on the front door of a supposedly abandoned house? Who would have an octopus, a deep sea critter, living in a swamp? And who would have Bela Lugosi play a mad scientist? 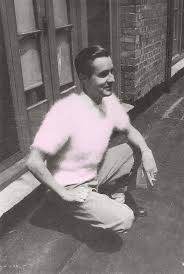 Hello and welcome movie lovers to the wonderful, funderful world of "Bride of the Monster", an anti-nuke horror flick, written, produced and directed by Ed D. Wood, Jr, a true giant in the Junk Cinema Pantheon of Celluloid Suck.

Released in 1955 and partially financed by a generous contribution from a wealthy Baptist businessman, "Bride of the Monster" (aka "Bride of the Atom") is Wood's highest budgeted (at $70,000) and best performing film, yet it still showcases all the cheap sets, stiff-as-starch acting, nutty special effects and off-the-wall dialogue that earned Ed the Lifetime Achievement Award as the Worst Director of All Time by the Golden Turkey Awards.

When the remains of Mac and Jake found, they bring the death toll around Marsh Lake to 12. This, in turn, snags the attention of Capt. Robbins, played by the full-figured, nine-fingered Harvey B. Dunn. A regular fixture in bad movies, Dunn's other credits include "The Sinister Urge", "Teenagers From Outer Space" and an uncredited role as an extra in the "The Ascot Opening Day" number in "My Fair Lady." As the head of the homicide division, Dunn spends most of his time in his office, reading the paper and fussing over his Tweetie bird. This might explain why so little progress has been made in "The Marsh Lake Murders".

Thank goodness peppy girl reporter Janet Lawton (Loretta King) is on the case! She knows SOMETHING is going on and she's determined to ferret it out.

"OK, let's have the story on Lake Marsh and the monster!" Janet declares, after pushing her way into Capt. Robbins office. 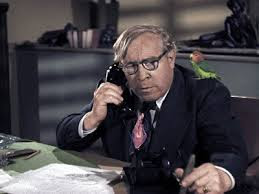 "There's no such thing as monsters," Dunn sputters. "This is the 20th century!"

Besides being a hot shot reporter, Janet is engaged to Sgt. Dick Craig (Tony McCoy), who is also working on the Lake Marsh case--and refusing to cough up any details, either. So Janet announces, "I'll just have to go to Lake Marsh myself!"

"That can be arranged!" Janet declares before stomping off. 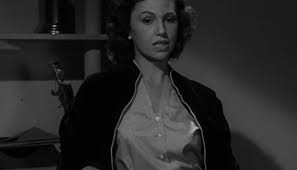 Hot-shot reporter girl Janet Lawton (Loretta King) wonders if her series on the Lake Marsh murders will earn her a Pulitzer Prize.

No sooner has the dust settled on that confrontation than "Bride of the Monster" introduces us to Prof. Strowski (George Becwar). He presents himself to Robbins and Craig as a tweedy expert on monsters. Our lawmen are a bit suspicious, mostly because Strowski keeps changing his accent...often in mid-sentence. Then he arranges to meet Lt. Craig the next morning so they can check out Lake Marsh together...and totally ditches him! Not good, not good.

It only gets worse.

Peppy Janet does indeed go over to Lake Marsh. Unfortunately, a storm whips up and she smashes her car. Staggering out of the wreckage, Janet screams and faints when she spies a large rubber snake casually draped over some tree limbs. Thank heavens Lobo shows up, although he's more interested in Janet's angora beret than the lady's safety. Eventually Lobo drags Janet off to Dr. Vornoff's lair, where the mad scientist makes her tea. He also decides the reporter girl will make a great mother for his future monsters.

But not right away! Remember Prof. Strowski? He's tramping around Lake Marsh, dressed like Captain Spaulding from "Animal Crackers." He quickly finds Vornoff's house and lets himself in. Turns out Robbins was right to be suspicious of the multi-accented monster expert. He's actually a secret agent from an unnamed Eastern European country on a mission to convince Lugosi to return to the Motherland. 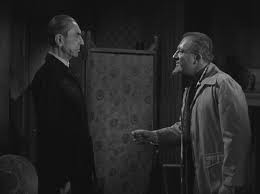 Twenty years earlier, Dr. V. was busy conducting experiments on how to make a race of atomic super people. At the time, his home land wasn't too keen on his theories; in fact, the government kicked Vornoff to the curb and he hasn't seen his wife or kid since. Now the powers in charge want the mad doc to come home and share his discoveries with the Mother Land--a change of heart that cuts no ice with Lugosi.

"I was classed as a madman, a charlatan, outlawed in a world which previously honored me as a genius!" Bela bellows. "I will perfect my own race of people! A race of atomic supermen which will conquer the world! Ha, ha, ha, ha!"

Refusing to take no for an answer, Strowski pulls a gun on Vornoff and demands he return to the Mother Land. Vornoff, in turn, sicks Lobo on Strowski, who tosses the spy to their pet octopus...who resembles as very big, very ugly and very slimy bean bag chair. While Strowski screams and flails about, the octopus remains inert, except for one tentacle that feebly sways back and forth...helped along by the unseen crew member who attached the limb to a fishing pole expressly for this purpose.

As our danse macabre totters along, it's clear director Wood is building up to an epic climax, where the forces of good and evil will duke it out for supremacy. 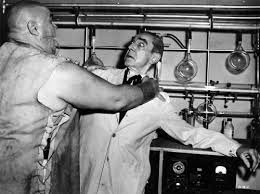 "Take This Job and Shove It!": Lobo reaches the end of his tether with Dr. Vornoff.

First, Dr. Vornoff hypnotizes Janet and puts her in a fancy wedding dress. She's duly strapped to the operating table and a bowl is put on her head. Lugosi then informs his test subject that the procedure he's going to subject her to "hurts just for a moment, but then you will emerge as a woman." Sounds just like losing your virginity, no?

Next, Lt. Craig arrives on the scene, only to be knocked on the noggin by Lobo. He's soon chained to the wall, all the better to watch his fiance' get fried by atomic rays.

Suddenly Lobo has a change of heart and can't bring himself to fry Janet. This upsets Vornoff, who starts whipping Lobo. The long suffering lab assistant decides he's had enough and pounds Vornhoff into pulp. He frees Janet, who, in turn, frees Lt. Craig. The down side? Lobo and Craig get into another fight and Lobo knocks the lawman unconscious, again.

While all this is going on, Capt. Robbins and a clutch of cops arrive at the Willow's place. They poke around upstairs, but basically are pretty ineffectual.

When we return to Dr. V's lab, it's the mad scientist  who is strapped to the operating table, while Janet and her fiance' cower in the corner. Turns out Lobo has been watching Dr. Vornoff VERY CAREFULLY and is now busy turning the dials and flipping the switches necessary to give his boss the shock of his life. 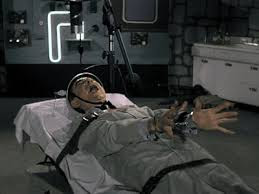 Bela Lugosi in a shocking portrayal.

Unlike the other poor saps subjected to this treatment, Dr. Vornoff (a body double in platform disco shoes) emerges as a "super man", not a stiff. The new and improved Dr. V. then proceeds to beat up Lobo and drag Janet off.  Fortunately, Lt. Craig finally snaps back into consciousness and chases after the duo.

The piece de resistance of "Bride of the Monster" is the film's final moments, where, in a flurry of cross-cut editing, Lt. Craig pushes a boulder the size of Jupiter on to Dr. Vornoff, who rolls down a ravine. Waiting for him down below is--say it isn't so!--the mad scientist's pet octopus, who proceeds to eat Dr. Vornoff for dinner. At that exact same moment, a lightening bolt hits the Willow's place and everything goes up in a mushroom cloud. As Janet and Lt. Craig hug each other tightly, Capt. Robbins wanders over and solemnly proclaims, "He tampered in God's domain."

Was he talking about Dr. Vornoff--or Ed Wood? 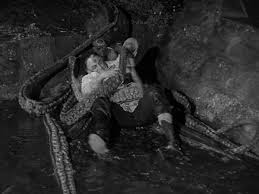 "An Octopus's Garden in the Shade": Bela Lugosi has a fatal encounter with his pet octopus.

I read a quote recently that said," The universe isn't made up of atoms. It is made up of tiny stories."

If you can think of a better one, have at it!

And SAVE THE MOVIES.