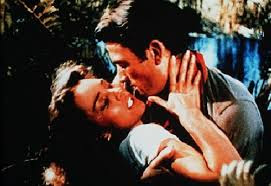 "I Hate Myself For Loving You": Pearl Chavez (Jennifer Jones) and Lewt McClannes (Gregory Peck) find lust in the dust in 1946's "Duel in the Sun."

Editors Note: I interrupt this regularly scheduled blog post to tell you about the most amazing singer/song-writer/performer I have discovered! His name is Pokey LaFarge. I learned about him thanks to my Daedalus Books catalog that featured CDs and DVDs. LaFarge looks a bit like silent screen comic Harry Langdon and his music is an original blend off jazz, swing and rock-a-billy, anchored by sharp writing. Go to YouTube.com and listen to tracks like "Wellington", "A Better Man" and "LaLa Blues". You'll be glad you did!

Are you in the mood for a big, sprawling Western set on the vast frontier under Technicolor skies?

Then watch "How the West was Won"!

However, if you are in the mood for a steamy, expensive cow pie narrated by Orson Welles, performed by miscast actors and featuring one the of the nuttiest endings in movie history, then saddle up for "Duel in the Sun" (1946)!

Produced under the obsessive eye of David O. Selznick, the man who brought you "Gone With the Wind", "Rebecca", "Spellbound" and other classics, "Duel" is every bit a classic, too, although not the type Selznick and company had in mind. 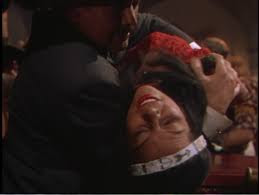 "Is that a pistol in your pocket or are you just enjoying the show?": Pearl's ma (Tilly Losch) in the arms of a VERY devoted fan.

Jesse McClanes (Joseph Cotten)--Lewt's older brother. He's refined, educated, a lawyer and Pearl falls for him like a ton of bricks. However, gentleman Jesse would rather stay "just friends", which upsets Pearl and pleases Lewt. 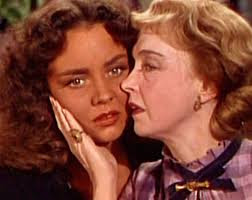 Lillian Gish consoles Jennifer Jones about being in such a crazy movie.

Senator McClanes (Lionel Barrymore)--He's Laura Belle's tyrant of a husband, the owner of the vast Spanish Bit ranch. Confined to a wheelchair after a mysterious "accident", the senator still rides rough-shod over everybody, barking orders, spewing insults and hollering, "Stop that confounded contraption!" whenever Laura Belle plays "Beautiful Dreamer" on the piano.

Although Pearl knows her background isn't exactly Blue Book ("I know what you think! That I'm trashy like my ma!"), she aims to be "a good girl" and even asks Jesse, "I wanna be a lady. Will you learn me?"

Jesse's refusal to entangle himself with Pearl leaves the door wide open for Lewt. Having no use for subtlety, Lewt swaggers into Pearl's room one night with a cocky sneer, ready for action. Pearl fights him off, tells him off ("I hate you! I hate you!") and throws him out--spitting for good measure. Lewt, however, makes it clear he'll be back.

Unfortunately for Pearl, there are few options. Why? Because "Duel in the Sun" makes it crystal clear that poor, pitiful Pearl is doomed to fall. Why so? Because her mother was a tramp, remember, and try as she might, it's just ingrained in Pearl's DNA that she'll be a tramp, too. 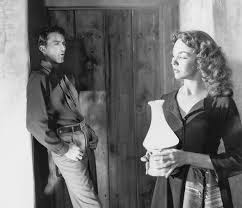 "Fancy meeting you here...": Lewt offers to show Pearl to her room.

Furthermore, the film argues, Pearl has the sincere misfortune of being pretty with a cute shape. Or, in the words of quack minister Walter Huston (known as "The Sinkiller") she's "a full blossomed woman built by the devil to drive men crazy!"

As if that isn't enough to convince movie-goers that Pearl is a lost cause, sin killer Huston adds, "Pearl, you're curved in the flesh of temptation! Resistin' is going to be a lot harder for you than females protected by the shapes of sows."

Ladies, are you listening? If you're pretty and attractive to men, you're finished! Doomed!

Of course, licentious Lewt is free from such taint. His rake-hell ways are presented as typical, sexy bad-boy behavior. In fact, whenever Lewt gets into a scrape with either the law or the ladies, Sen. McClanes couldn't be more delighted. "What a boy!" he crows.

So Pearl gives in to Lewt and hates herself for it--especially when Jesse finds out and can't hide his disappointment. However, like a moth to a flame, Pearl finds she can't resist Lewt. And Lewt realizes he can't resist Pearl. Thus begins the flick's centerpiece, a sexual tug-of-war between Jones and Peck, who fight, have sex, then fight about having sex, then vow never to have sex with each other again until, of course, they have sex again. Whew! 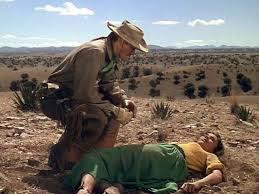 "Was it good for you, too?": Pearl and Lewt in the milky after-glow.

To her credit, Pearl eventually gets tired of this back-and-forth with Lewt and demands he marry her--or else. Naturally, her cuddlemate likes things just the way they are.

"No woman can tie on to me," Lewt drawls. "Especially a  bob-tailed little half-breed like you!"

About this time, Lewt gets himself into trouble with the law (something about blowing up railroad tracks) and skedaddles out of town. That gives Pearl a chance to meet up with Sam Pierce (Charles Bickford), a rancher who treats her kindly. When Sam proposes, Pearl accepts, which causes Lewt to go ballistic. He may not want to marry Pearl, but Lewt will be damned if he's about to let Pearl marry someone who does. In short order, Sam is toast, Lewt is wanted for murder, Pearl is furious, sweet Laura Belle expires (of what, we're never told, but I'm guessing embarrassment) and Lewt vows to kill Jesse. It's also about this time that Sen. McClanes begins to wonder if Lewt might be a bit homicidal or something.

Now "Duel in the Sun" staggers to its justifiably nutty conclusion. Strap yourself in, because it's a doozy! 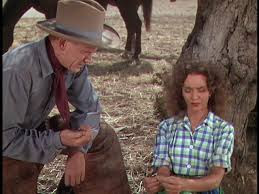 First off, Pearl realizes that she's the only one who can save Jesse from Lewt. So she saddles up a horse and loads up her shot gun.

Next, she rides night and day to reach Squaw Head's Rock, where Lewt has been hiding out. She calls out his name, he calls out her name. They declare their undying love for each other and then start shootin' (informed bad movie fanatics will recall that the same thing happens in Roger Corman's equally nutty but vastly cheaper "Gunslinger" starring Beverly Garland and John Ireland--also reviewed in this blog).

Soon enough, Pearl is bleeding to death. By coincidence, so is Lewt. With their last bit of strength, Pearl and Lewt crawl to each other, bellowing each others' name. "Pearl!" "Lewt!" "Pearl!" "Lewt!"--this goes on for quite a while.

Finally, Pearl and Lewt meet. They are dirty, bloody, sweaty and near death's door. They have one last dirty, sweaty, bloody orgasmic embrace before it's lights out. As their corpses bake in the sun, narrator Orson Welles intones, "And this is what the legend says: a flower, known nowhere else, grows from out of the desperate crags where Pearl vanished. Pearl--who was herself a wild flower, sprung from the hard clay, quick to blossom and early to die."

When "Duel in the Sun" was released in 1946, it was quickly dubbed "Lust in the Dust". It was considered so controversial that the diocese of Los Angeles condemned the movie as "morally inoffensive" and "spiritually depressing." Later on, the diocese's official magazine, The Tidings, explained that the flick threw the "audience's sympathy on the side of sin." They also took issue with the fact that Jennifer Jones was "unduly, if not indecently, exposed" and that Walter Huston's "Sinkiller" character "parodies prayer", becoming a "comical figure." Movie theaters, anxious to avoid offending their patrons, used tamer posters to advertise the flick. Jennifer Jones supposedly got hate mail for such a racy turn--after all, she won her Best Actress Oscar playing a nun! Columnist Jimmy Fielder, meanwhile, took out ads in the Hollywood trade papers disavowing his positive review of the movie. Fielder insisted the review was written by a staff member using his by-line-- he was home sick.

Of course, all the hub-bub made "Duel in the Sun" the year's top money maker. Actress Jones was even nominated for an Oscar. Gregory Peck, on the other hand, was pretty blase' about the whole thing. His role as Lewt wasn't a real acting stretch, at least for him: "I rode horses, necked with Jennifer Jones and shot poor old Charles Bickford," he shrugged. Lucky for him, the long shooting schedule for "Duel in the Sun" (20 months!) over-lapped with his filming of "The Yearling", which offered the actor a more challenging part.

To paraphrase Tolstoy, all good movies are alike; however, all bad movies are bad in their own way. In the case of "Duel in the Sun", what made this movie so hypnotically bad was a clear case of insanity--by David O. Selznick.

When Selznick began this project, he envisioned it as rivaling or even surpassing "Gone With the Wind". He also wanted to show off the versatility of his leading lady and off-screen cuddlemate Jennifer Jones. To achieve these aims, David--a micro-manager and a perfectionist ne plus ultra--went through several screenwriters, perched on director King Vidor's shoulder so heavily he quit, spent millions on a promotional campaign and had Josef von Sternberg hanging around to "consult."(Selznick was also battling a reported addiction to uppers, which couldn't have helped matters.) As for Jennifer, she teased her hair into a fright wig, deepened her skin with wood stain and modeled more off-the-shoulder blouses than a Target summer sale. To convey Pearl's fiery and impulsive temperament, Jones stuck out her tongue, spat on the floor, rolled her eyes and yanked at her hair while screaming, "Trash, trash, trash, trash!"--to the approval of her husband, but to the detriment of her character.

The end result? A movie so extreme, so over-the-top and so luridly photographed that it resembles a western-themed dream sequence from "The Bold and the Beautiful". The only thing missing is "B and B"'s obligatory shower scenes and a wedding disrupted by a character long-thought dead carrying a baby. 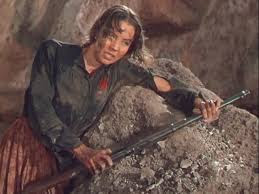 Pearl on the look out for her swine, Lewt.

As I mentioned earlier, "Duel in the Sun" was considered hot stuff back in 1946. Since then, it has been duly recognized as a Golden Gobbler of titanic proportions. And it wouldn't have happened without David O. Selznick, who lovingly stuffed this turkey until it exploded.

SAVE THE MOVIES, too!