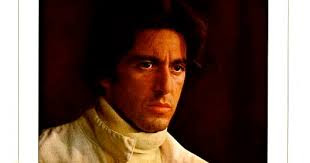 Before we begin our latest excursion into the wide Sea of Cinematic Schlock, I need to say something:

He is completely and totally Bobby Deerfield.

Nobody else on God's green earth could possibly be Bobby Deerfield other than Al Pacino. Nobody! 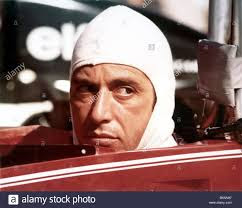 Al Pacino in a later role as the evil Smurf White Lightning.

If you don't believe me, please consult the movie trailer for "Bobby Deerfield" (1977) on YouTube.com. If you don't come away absolutely convinced that Al Pacino IS Bobby Deerfield, well, you must be dead inside.

Who is "Bobby Deerfield"?

According to the hushed, reverential voice on the coming attractions trailer, "Al Pacino IS Bobby Deerfield...magnetic, idolized, but alone." He is "moving in his own world, motivated by disaster."

Actually, he's a world famous race car driver motivated by the big bucks he can earn, but same-same.

Al Pacino cools off from all the hot action in "Bobby Deerfield."

He is also "courted by death...and women."

Lots of women. I mean, he's Al Pacino! Or rather, he's Bobby Deerfield!

Then he crosses paths with Lillian (Marthe Keller), a "woman with the instincts and whimsy of a child", who also possesses "a wisdom far beyond her years."

Which means...she went to college?

Anyway, in case you still have no idea what "Bobby Deerfield" is about, the narrator announces it's about "leaving someone, meeting someone and finding yourself." 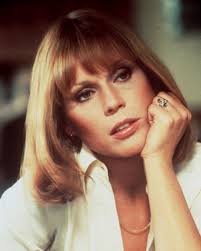 Marthe Keller wonders why her Italian character has a German accent.

The trailer for "Bobby Deerfield" is such a riot, you may not feel the need to watch the movie. However, I insist you do watch the movie, because it's just as wacky as the preview--only longer.

"Bobby Deerfield" is a rich, famous and deeply self-involved race car driver who spends a lot of time in Europe. He also does a Mae West impression, but we'll leave that for later. One day he's participating in a race where a fellow driver dies in a fiery crash. This totally bums Bobby out.

As both drivers drove the same make of race car, Bobby becomes obsessed with what caused the accident. The mechanics going over the wreckage with a fine tooth comb can't find anything; in fact, it appears "human error" may have been the culprit. This cuts no ice with Bobby, who insists SOMETHING had to cause the crash...like a stray chicken or a bunny hopping along the track.

For the record, nobody else saw any rouge chickens or bunnies, but Deerfield refuses to let the matter drop. He refuses to drive until he knows what killed his friend and announces he's going to visit Karl Hotzman, another pro-driver badly injured in the same crash. 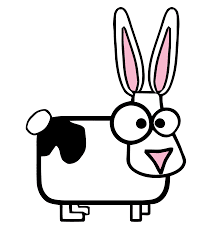 Obsessed driver Bobby Deerfield thinks a rogue rabbit (like the one pictured above) might have caused his friend's fatal car crash.

Karl, who is confined to a wheelchair with a spinal injury, is recuperating in a medical clinic which provides its patients with a 4-star eating experience, plenty of hooch and cabaret entertainment in the evenings. (Anyone doubting that European health care is more comprehensive than American health care need only to watch this flick to know that it's true.) That's where Bobby meets Lillian (Marthe Keller, who was also Pacino's cuddlemate off screen).

Lillian is another puzzling aspect of this flick. She's suppose to be Italian, but she speaks with an inexplicable German accent (just for the record, Keller is actually Swiss). When Bobby asks if she's a patient at the clinic, Lillian barks, "Do I look sick?" Later in the evening, a nurse brings Lillian her nightly meds. She refuses to take them.

"You know the rules," the nurse says.

"I will meet death on my own terms," Lillian declares.

As practiced bad movie fanatics know, this can only mean the Lillian is suffering from Ali McGraw's Disease, named after the mystery ailment that claimed Ali McGraw in the putrid 1970 tear-jerker "Love Story." The victims, all women, look post-card perfect, experience no debilitating side-effects from medicine or chemo, eat like pigs without gaining an ounce and effect a hyper-perkiness that is awesome to behold. Furthermore, they have plenty of money and either live in cool apartments or rent pricey villas. Lillian ticks all these boxes, plus one more: she's annoying as hell.

Lillian asks, "Do I look sick?" In fact, she looks great--which is how we know she's doomed.

That becomes apparent when Lillian bums a ride from Deerfield outside the clinic. As they drive through the lush Italian countryside, Lillian prattles endlessly about the size of her hands, asks if there are "homos in New Jersey" and if Bobby ever felt like screaming when he drives through a dark tunnel (for the record, no). Later, Lillian notices a hot air balloon drifting by. She tries to convince Pacino to follow it, but he declines. She then makes a face and calls Bobby "a turtle."

You'd think Pacino would be glad to unload this Gabby Gertie at the rustic inn they stop at, but no. Instead, when Lillian asks him to snuggle in bed with her, he leaps at the offer. In anticipation of a hot night in the sheets, Bobby methodically disrobes, hangs up his clothes, brushes his teeth and gargles. By the time he joins Lillian in the sack, she's half asleep and mumbles something about Bobby taking too long in the bathroom.

"I always gargle," he states proudly.

As Bobby is stroking Lillian's hair, a chunk of it falls out. Hmm. That's weird. What could it mean? Perhaps she's going too heavy on the conditioner? Maybe she should dial down the heat setting on her blow dryer? It couldn't be a sign that Lillian's ill, could it? Of course, not! After all, Lillian doesn't look sick, she doesn't act sick...although she was staying at a medical clinic. However, rather than discuss the matter with Lillian, Bobby tries to stick her hair back on her head and goes to sleep. 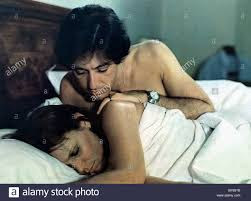 FINALLY, Deerfield returns to his Paris flat. Waiting for him is his personal tailor and French cuddlemate, Lydia (Anny Duperey). These two apparently have one of those very '70's, very European relationships where as long as they are "honest with each other", they can sleep with other people. It's clear Lydia has become fed-up with this arrangement. See, a friend tattled that he saw Bobby with Lillian. When Pacino refuses to discuss the matter, Lydia announces, "I will make you an omelette."

"I don't want an omelette," he protests.

Filled with Gallic indignation, Lydia retorts, "I WILL make you an omelette! And I don't give a damn if you want an omelette!"

You tell him, honey!

As "Bobby Deerfield" dribbled along, I began to notice similarities between this flick and "A Place for Lovers", a cinematic suppository from 1969 starring Faye Dunaway and Marcello Mastroianni. Check this out:

"My mouth belongs wherever I put it!"*: Bobby Deerfield yells at Lillian for taking a balloon ride without him.

* Both movies were shot in Italy.

*Al Pacino plays a race car driver, while Mastroianni was a designer of air bags for cars.

*Both sets of co-stars were cuddlemates off screen. 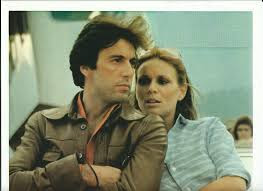 "Should we fire out agents?": Pacino and Keller commiserate on the "Bobby Deerfield" set.

*Neither Pacino or Mastroianni realized Keller or Dunaway were sick until some busybody told them.

*Both films were directed by people (Sydney Pollack and Vittorio De Sica) who should have known better.

* Both films tanked at the box office.

Given the abundance of similarities, what does this mean? 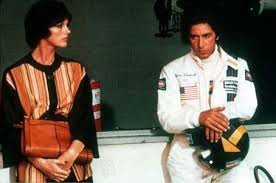 Bobby Deerfield and cuddlemate Lydia realize their love has hit the skids.

Theory #3--Under no circumstances should Al Pacino be allowed to do a Mae West impression. Fans might be willing to tolerate Pacino screaming "You're out of order!" in "And Just for All", Pacino yelling "Attica! Attica!" in "Dog Day Afternoon", Pacino snarling, "Let me introduce you to my little friend!" in "Scarface" and Pacino declaring, "My mouth belongs wherever I put it!" in "Revolution", but swinging his hips and trying to copy Mae West's famous come on? No. Never. That's too much. End of story.

Theory #4--The people behind "A Place for Lovers" should have warned the people behind "Bobby Deerfield" that their picture was as doomed as their leading lady's character. It might have saved everyone time, money and embarrassment.

So movie lovers, please always remember, and never forget, the only person who can do Mae West justice is Mae West. And SAVE THE MOVIES, of course. 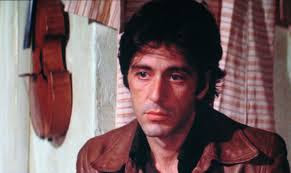 Al Pacino realizes "Bobby Deerfield" ends his cinematic winning streak of "The Godfather", "The Godfather, Part 2", "Dog Day Afternoon" and "Serpico". Maybe he should have an omelette?