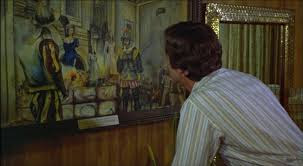 "Magnum, P.U.": Tom Selleck (with his back to the camera) falls under the spell of  a cursed painting in "Daughters of Satan".

You know, there's nothing wrong with surprising your loved ones with tokens of your esteem.

Just make sure those tokens aren't cursed paintings of condemned witches who vowed revenge on the Inquisition members who burned them at the stake, OK?

And double check that one of those Inquisition members isn't YOU and one of the witches isn't YOUR WIFE--reincarnated in the present day, of course.

It's this type of carelessness that creates all sorts of problems for future TV hotshot Tom Selleck in "Daughters of Satan", a cheesy, sleazy and somewhat queasy exploitation/horror flick from 1972. It's here Tom Terrific (as James Robertson, an art expert from "the United Museum Fund"), stumbles into low rent satanic insanity--or, as the movie's ad screamed, "A cult of lust-crazed witches torturing with fire and desire!" 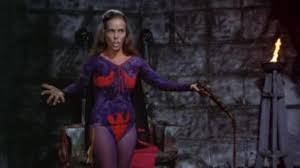 Business concluded, Selleck is about to leave when he lights upon the aforementioned painting. "Chris!" Tom yelps when he sees how perfectly the witch in the center of the picture resembles his wife (Barra Grant). So naturally Tom buys the painting as "a surprise" for his cuddlemate.

As they say, no good deed ever goes unpunished--although in this case, the ones being punished were the viewers who plunked down their hard earned money to watch this flick. I, on the other hand, sought this movie out willingly, so I'm in no position to complain.

Once Chris gets a gander at the painting, she is horrified--it totally clashes with her living room decor--and begins mumbling some stuff about 1592, the year the witches were roasted and toasted. Then she starts hearing weird noises at night and befriends a dog named Nicodemus. By sheer coincidence, a pooch who looks EXACTLY like Nicodemus appears in the painting. Hmmm. Want to know something else? After Fido and Chris become friends, the dog in the picture disappears. In fact, all the principals in the picture start disappearing. What's that suppose to mean?

Well, perhaps it means when the spirits of the people in the picture have been reunited with their present day selves, they can start making good on that revenge vow. 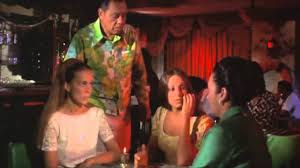 Because this is a major plot point, it deserves some scrutiny, because the flick is surprisingly wishy-washy on this subject.

See, at times it appears that the women who comprise "The Daughters of Satan" don't realize they are the Daughters of Satan. The gals (Tani Gutherie, Barra Grant and Paraluman) can go for long stretches leading normal lives as a flight attendant, housewife and nurse, respectively. Then they start hearing weird noises and commands that they kill people. Soon enough, the ladies are in full satanic attack mode. Once they have done the devil's dirty work, however, they snap back into their regular selves, but seem pretty confused.

This lack of clarity is best illustrated by the characters Kitty and Dr. Dangal (Vic Silayan). When we first see her, Kitty's whipping the daylights out of some poor gal who has not shown Old Scratch enough respect. Later on, she's rushing into the office of Dr. Dangal--who happens to be consulting with Tom at the time-- declaring, "The power is always at me! They keep telling me what to do! To do evil evil things! Things I wouldn't do on my own!" (Like, say, whipping somebody?) When the doctor tries to calm her down, Kitty screams, " I don't want to take part in a conspiracy to murder!" He escorts Kitty into his other room and reassures her, "No one can force you into crime--unless it's what you want."

Things get murkier when it's revealed Dr. Dangal was treating Chris for the same ailment plaguing Kitty. Yet he isn't convinced the cases are connected, not really.Then Chris tries to off hubby Tom by pushing him off a bridge. This piques Dangal's interest enough that he visits Tom and his sexy sideburns at home. After Tom wanders off to bed, the painting comes alive and Dr. Dangal sees for himself the witches' being burned at the stake. He grabs a handy statue of the Madonna and points it at the picture; the painting goes back to normal. However, the good doctor fails to mention ANY OF THIS  to Tom-- a MAJOR OVERSIGHT, in my opinion. Is it any surprise, then, that the poor guy dies in a car crash soon after? Or that Kitty arranged it?

But, wait! There's more! After the doctor's funeral, Kitty convinces Tom to come to her home. She pours them drinks and it's clear she wants to (or has been ordered by the evil spirits to?) get Tom in the sack so she can kill him. Kitty begins telling him about her late husband. "He left me rich with things, but hollow inside," Kitty reveals. When that fails to do anything, she muses aloud, "Eleven years and, you know, he never once tried to touch my breasts." Realizing Kitty is seriously batty, Tom tries to leave. Then she lures him into her bedroom by announcing she has a painting exactly like his. While Tom reads the inscription, Kitty takes the time to arrange herself seductively on her bed and teases, "Don't you paw me! Why is it every man who gets near me wants to paw at me?" 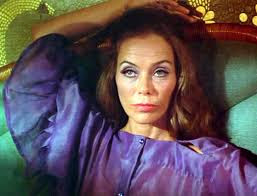 "Excuse me, my face needs a nap": The evil Kitty sets her sights on Tom.

This causes Tom to utter the nuttiest line in the flick: " I don't know. Maybe you have a very high paw quotient."

After numerous attempts on Tom's life, the death of Dr. Dagnal, bizarre flashbacks of Selleck dressed up as a Conquistador and excessive nudity, "Daughters of Satan" finally winds down to its predictably shoddy conclusion. Was wife Chris a reincarnation of a witch or was she merely possessed by her spirit? The movie leaves that question unanswered, but it's a sure bet Tom really, really regrets ever buying that ugly oil painting.

Critics, of course, really regretted having to review "Daughter's of Satan" upon its release. The New York Times, for example, had only this to say about Tom's performance: "Selleck, a handsome, virile, mustachioed type, is natural in his confusion." The Hollywood Reporter, on the other hand, felt the flick was so forgettable it needed "a strong companion piece to warrant it being taken out of the can." It probably didn't help matters that the film was promoted with the tag-line, "A thrill drama of witches and things to keep the horror plot boiling". Even worse, the producers suggested movie theaters dumb enough to screen the film should set up witch dummies in the lobby and set them on fire as a publicity stunt--but only after they checked things out with the local fire department! Safety first!

Of course, the ONLY reason for ANYONE  to subject themselves to "Daughters of Satan" now is to see Tom Selleck make a spectacle of himself before his "Magnum, P.I.", "Blue Bloods" and "Jesse Stone" mystery movie glory days. Those sentiments were reinforced by the Brothers Medved's Son of Golden Turkey Awards, which nominated Tom for a Golden Gobbler in the category "Most Humiliating Performance by a Future TV Star". The other nominees included Linda Evans for "Beach Blanket Bingo", Danny Thomas in a remake of  "The Jazz Singer" and Joan Collins, who walked away with the trophy, for her stellar work in "Empire of the Ants."

(Personally, I didn't think Linda Evans should have been nominated for her work in "Beach Blanket Bingo". The movie is stupid, yes, but kind of charming. A far more embarrassing assignment for Linda was playing the hooker ordered to be "the new friend" of Joe Don Baker in the movie "Mitchell". Not only is Linda's character suppose to fall in love with the repulsive Mitchell, but in one of their "love scenes" sharp-eyed viewers can clearly see a used bottle of baby oil nearby. EWW! In my opinion, this performance is far more humiliating to the future Krystal Carrington than "Beach Blanket Bingo" ever could be. In fact, if Evans had been nominated for this performance, I think would have won--which proves how important it is to be nominated not only for the right role, but in the right category, too. If Annette Bening had been nominated for Best Supporting Actress in "American Beauty" and not Best Actress, she would have won. See how that works? But I digress...) 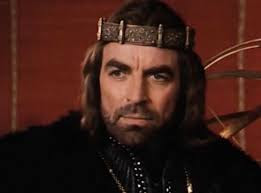 Strangely enough, "Daughters of Satan" would not be the only film where Tom unwisely appeared as a Spanish big-wig. In "Christopher Columbus: The Discovery" (1992) Selleck played King Ferdinand...with predictably poor results. Catherine Zeta-Jones is in this movie, too, but her part is much smaller.

The fact that Tom Selleck built a respectable career for himself after appearing in "Daughters of Satan" (and several other hack movies) is proof SOMEONE was looking out for him. After getting attacked by bandits, nearly run over by a car, pushed off a bridge, locked in a room filled with poisonous gas, snarled at by a ferocious dog, knifed in the back by his wife and then forced to wear an ugly flowered dress shirt in the course of this film, Tom deserved every bit of good fortune coming to him.

So, movie lovers, remember to do background research before you attempt to invest in art, and help me SAVE THE MOVIES.