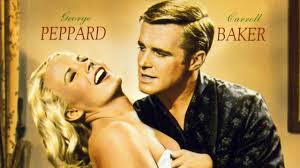 Carroll Baker and George Peppard have a calamitous encounter in "The Carpetbaggers"(1964).

"You filthy perverted monster!" Rina Marlow (tramp expert Carroll Baker) screams. "You're the meanest, cruelest, most loathsome thing I have ever met!"

Who is the recipient of such endearments, you ask? Why, it's Jonas Cord (a pre-"A-Team" George Peppard), Rina's one-time boyfriend-turned-step-son(!) in the legendary trash-fest from 1964, "The Carpetbaggers".

Written by Harold Robbins, "The Carpetbaggers" was the first (and perhaps the best) big screen adaptation of this author's distinct literary style, which was basically borrowing heavily from the tabloid scandals of the day; changing a few names and details so he couldn't get sued; throwing in some rough sex; adding dialog that must be screamed at the top of the actors' lungs and serving it up hot'n'heavy to an eager public delighted to witness the privileged classes acting like participants in a hormone experiment.

Jonas Cord is the son of a rich (but morally questionable) big business tycoon Jonas Cord, Sr., played by Leif Erickson. After a particularly ugly argument ("A man is judged by what's in his head--not his bed!" dad rages, prompting sonny to bark, "You dried up impotent old man!") the old pepper drops dead. Jonas then takes over Cord Enterprises and turns it into an international airline/movie studio/multinational corporation powerhouse. Along the way, he marries and discards wife Monica Winthrop (Elizabeth Ashley, Peppard's real-life cuddlemate), dates and dumps a variety of other women, takes over and sells off a bunch of companies, blackmails anyone who moves, beats a few people up, smokes umpteen cigarettes and downs endless shots of scotch. 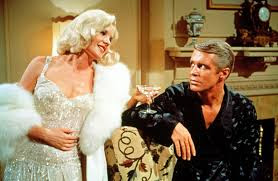 Rina Marlowe celebrates the death of her husband, who happens to be Jonas' father.

What makes Jonas act this way? Well, I'll tell you: he had a twin brother who died insane at the age of eight. After that, Jonas' cold pa (fearful of catching insanity) "treated him like a leper" and drove his heart-broken ma to a premature, booze-soaked grave. Believing he may die young and insane, too, Jonas is determined to achieve more success, screw more women, make more money and screw more women than his dad. Sure, he might step on some toes along the way and possibly break a law or two, but Jonas Cord will show the world he's got what it takes!

Eventually it's Jonas' childhood caretaker Nevada Smith (Alan Ladd) who knocks some sense into the guy--literally. In fact, one of the highlights of the flick is watching the obviously smaller Ladd pound the tar out of Peppard, who deserves every punch to gut, sock to the jaw and kick to the crotch that Smith delivers (this is one scene that proves size really doesn't matter.).

"The Carpetbaggers" is a delightfully dense, triple-decker, grade A cheese fountain that must be seen to be believed. In 1964, this movie was considered so racy that my grandmother was horrified that my mom and dad went to see it--and took my older brother (then a toddler) along with them.

It's part of Bad Movie Lore that the character Jonas Cord was based on Howard Hughes. It's also been reported that Rina Marlow was based Jean Harlow, Jenny Denton (played by the hysterical Martha Hyer) was based on Jane Russell and Nevada Smith was based on cowboy star Tom Mix. That may well be true. However, while I was watching the flick, it seemed to me that author Harold Robbins had somehow looked into a crystal ball and conjured up another inspiration for his loathsome main character: Donald Trump. 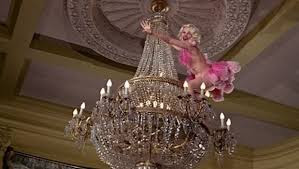 Both Jonas Cord and Donald Trump inherited their money from their fathers and took over their companies; both cheated on their wives; both demand absolute fealty from subordinates, yet do not offer any in return; Jonas Cord didn't want kids because he feared passing on bad genes; Donald Trump didn't want to name his first born after himself for fear the tyke would "end up a loser"--a realistic worry, as it turned out.

Where these two characters REALLY intersect, however, is their awful treatment of anyone who crosses their path, especially women.

When ex-girlfriend turned stepmother turned widow Rina throws herself at Jonas ("I'm yours anyway you want me! Love me!"), he spits back, "You want sensation! The uglier, the better! The more it hurts, the nicer it is!"

When fiance' Jenny turns down Jonas' marriage proposal (because she's being blackmailed by a sleazy scriptwriter and she doesn't want to embarrass him), Jonas remarks, "There's nothing more righteous than a reformed hooker."

However, when Jenny insists that she's not fit to be anybody's wife ("I'm only good at one thing!" she sobs. "I can't even have children!"), Jonas grabs her in a death grip and declares that's just what he wants from a wife: "All I ask for is your beauty and your sex! I don't want love or children or home baked cookies! I just want a woman who is there when I need her! In return, you'll live like a queen!" Close your eyes, and you can imagine Donald Trump saying the same thing!

Jonas makes Jenny an offer she can't refuse--or so he thinks.

After witnessing so many of these encounters over the years, an employee of Jonas' observes, "When it comes to people, he's a jerk."

Does all this make Jonas and Donald twin brothers from different mothers? I report, you decide...but I say yes.

Back to the flick.

After Jenny runs away and Nevada beats him to a pulp, Jonas realizes he's
a total motherf...er, jerk he's been. So he crawls back to the only character in the film who can actually tolerate him: ex-wife Monica.

Of course, things aren't perfect there, either. Remember, Jonas goaded Monica to divorce him and made it clear he didn't want kids. Then, when Monica delivers a bouncing baby girl named Joanne shortly after their marriage is dissolved, Jonas is fit to be tied. Monica raises the tyke on her own and Joanne appears to be perfectly normal. When Jonas remains unconvinced, his ex wails, "Just look at her report cards!" Still, Monica takes Jonas back in a New York Minute and they live happily ever. The end.

Jonas Cord spends some quality time with his only friend...besides his ex-wife...booze.

So, movie lovers, what have we learned from all of this?

* Rich people are different from you and me..they're tackier, more promiscuous and they booze a lot. According to Harold Robbins, anyway.

* Carroll Baker is the only actress in Bad Movie history to have played both Jean Harlow (in the bio "Harlow") and a character thinly based on Jean Harlow.

*Nobody can grit their teeth and jut their chin like George Peppard!

* Jonas Cord and Donald Trump were separated at birth...maybe? 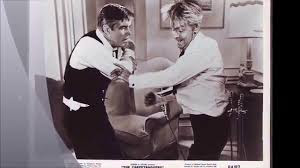 * You haven't lived until you've seen George Peppard snarl, "You were beautiful and no good and that made it better!"

* Screenwriter John Michael Hayes had to do quite a cut and paste job in bringing Robbins' novel to the screen. Among the scenes he had to leave out from the book included a sexually inexperienced gal hoping to make her wedding night easier for her husband by, um, cramming a stick up her, um, "insides", so her better half would have an easier time ,um, "sliding in", so to speak. Altogether now: EWWW!

So movie lovers, please always remember, and never forget, art can sometimes imitate life and truth can be stranger than fiction, and Junk Cinema is where they both meet! Also, save the movies!