And Now, A Period Piece. 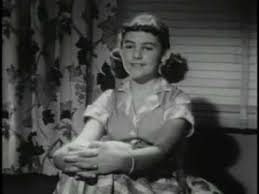 She enjoys being a girl: Molly contemplates the future in "Molly Grows Up"(1953).

I'd like to introduce you to Molly (Betsy Hawkins). She's a chipper, pig-tailed bobby-soxer of the first order. She lives in an idyllic suburban enclave with her perpetually pipe-puffing dad, domestic goddess mom and glamorous older sister Jeannie.

Yet none of those things worry Molly one bit. That's because she's part of a new generation of gals who view getting their period as a significant step towards entering the world of parties, dances, fluffy formals, boys, dates, going steady and True Love--decidedly not "the Curse" of yesteryear.

And how did our heroine arrive at such an enlightened view of menstruation? Probably from watching "Molly Grows Up"(1953), the Grande Dame of mental hygiene "period pieces" that flourished from the mid-1940's to the mid-1970's. 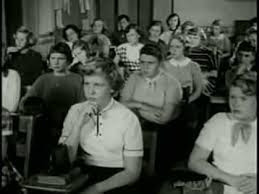 A collaboration between progressive educators and the magic of cinema, mental hygiene films were short tales meant to address every kind of social issue under the sun to America's children in a safe, non-threatening way. Touchier subjects like sex were thought to be ideal for mental hygiene films; in a darkened classroom, the genders separated to avoid embarrassment, kids could learn about the birds and the bees in safety. Once the youngsters had watched the flick, the subject was covered. No more worries.

Of course, it was never that simple, but during their hey-day, mental hygiene films were considered cutting edge educational resources.

The narrator of "Molly Grows Up" is Miss Jensen, a Miss Hathaway-ish school nurse who boldly informs us that Molly "is just the sort of girl" everyone would like to know. It's Miss Jensen who tells us that Molly and her big sister Jeannie "each have their own room" and get along "about as well as most sisters do." Lately, however, Molly has shown an unnerving interest in "her sister's things"--even trying on her hats and lipsticks on the sly.

"Molly!" Jeannie shrieks, catching her kid sister in the act. "How many times have I told you to stay out of my things?!"

Then Jeannie opens a drawer and pulls out a Modess sanitary napkin the size of a Universal Remote and as thick as a brick. Molly pulls out a napkin too and asks Jeannie, "When do you think I'll start having periods?" 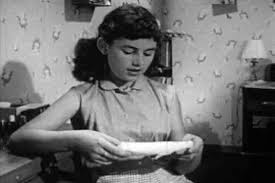 "This is suppose to go where?": Molly is awed by the latest in feminine hygiene technology.

"I don't know," her big sis replies off-handedly. "Everybody is different." Then Jeannie snarks, "But with the way you've been behaving lately, it shouldn't be much longer."

Sure enough, it isn't. Molly arrives home from school one afternoon and proudly announces to her mother, "Guess what! I got my first period today!" Mom is so thrilled, she stops stirring her cup-cake batter and exclaims, "Tell me all about it!" I'll skip those details, but I will tell you that a blinding headache and blood-soaked panties weren't involved.

Later on, Miss Jensen returns to teach a health class where Molly and her school mates learn all about menstruation. There is a diagram of the female reproductive system on the chalkboard and a very concise explanation of the mechanics of menses. While "Molly Grows Up" does admit that a "female egg fertilized by a male sperm" is the first step in making a baby, the flick doesn't explain how the egg and sperm manage this transaction. Do they answer a personal ad? Meet through friends? Hire a lawyer? Is alcohol involved? Does money change hands? We're never told.

To be fair, Molly and her gal pals aren't interested in these type of questions anyway. Instead, they want to know if they can shower and bathe regularly (yes), wash their hair (yes, but be sure and dry it quickly), go swimming (no way) or ride horses (not until the tail end of your cycle). It's also OK to roller skate and square dance, as long as you don't "bounce around a lot."

When "Molly Grows Up" ends it's broadcast day, we see the dolled-up Jeannie going on one of her endless dates. Watching her from afar, a Modess sanitary napkin securely strapped in her panties, Molly looks far away and dreamy-eyed. No doubt she's picturing herself in Jeannie's place, wearing a bell-shaped ball gown, swaying to "I Only Have Eyes for You" and taking short, quick breaths because her pantie griddle is so damn tight... 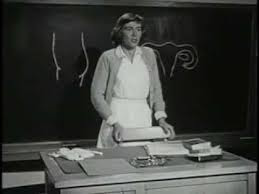 "Today's lesson was brought to you by the letters P, M and S": Miss Jensen shares the facts of life.

If you think "Molly Grows Up" sounds dated and goofy, that's because it is. Even by the standard's of the day, "Molly Grows Up" is stiffer than a board. However, if you want a more down-to-earth, hip and happenin' look at menstruation, check out 1973's "Naturally...A Girl".

This cheery, up-beat mental hygiene flick interviews a racially diverse group of girls (and a few boys!) who talk about getting their periods--the boys don't talk about getting periods, of course, but instead show a sophisticated understanding of what periods are for. And the guys are very polite, I must say. Not one of them calls menstruation "surfing the crimson tide" or "being on the rag", like the well-honed wits I went to school with. Anyway, none of girls profiled here is really fazed by this biological phenomenon. The gals, who are decked out in the awful hair styles and polyester fashions of the day, understand that menstruation is necessary and natural and needed "so you can have babies." The narrator reassures the audience that you can do all the things you want to during your cycle--even swimming, now that tampons are available. Unlike "Molly Grows Up", "Naturally...A Girl" shows teen girls growing up to be nurses, teachers, stewardesses, secretaries and actresses without their periods getting in their way. As one perky pre-teen quips, being a girl "is a lot better than being a boy!"

Of course, these mental hygiene flicks were made for two reasons only: to demystify menstruation and to sell Modess, Kotex and other assorted feminine hygiene products. Acting, writing and production values? Forget about it.

And, yes, I understand, that these films were made with the best of intentions. For some kids, this was the only accurate sex education they would ever have.

So why include mental hygiene films in a blog dedicated Junk Cinema? 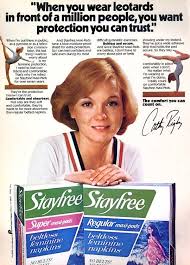 You can't argue with the logic of this vintage Stayfree ad.

Because who else is going preserve these films for future generations?! Red Box?

A sick joke, I know, but, hey, observational humor.

So movie lovers, please always remember, and never forget, avoid vigorous square dancing when your monthly bill comes due and, of course, help me SAVE THE MOVIES!