Watch Elizabeth Taylor And Richard Burton Stuff A Turkey Until It Goes "Boom!"

Elizabeth Taylor in the the role that made her shameless: Flora Goforth in the box-office bust "Boom!"

The silver screen has given us some great couples over the years: Mary Pickford and Douglas Fairbanks, Greta Garbo and John Gilbert, Bogie and Bacall, Hepburn and Tracy, Dean Martin and Jerry Lewis.

However, the most sensational of them all--at least in terms of tabloid notoriety--has to be Elizabeth Taylor and Richard Burton.

They met on the set of "Cleopatra" in 1961. Both were married; Taylor, in fact, was on hubby #4 (Eddie Fisher), whom she "stole" from Debbie Reynolds not long after the death of hubby #3 (Mike Todd) who died in a plane crash. 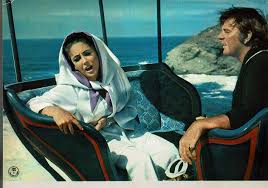 "I think I'm going to hurl!" Flora Goforth appears for suffer from a nausea attack. The audience, just as queasy, can relate.

"Has anybody ever told you you're a very pretty girl?" Richard asked Liz one day.

Soon enough, the world was shocked shocked! to learn that the co-stars were not only dating, but doing nothing to hide it. As torrid updates about the affair circled the globe almost hourly, the Vatican even got into the act and penned an editorial condemning "the caprices of adult children."

Liz and Richard eventually made it legal in 1964. From then on, they were simply known as "the Burtons". Besides their status as gossip column fixtures, the Burtons were box office. "The VIPs", "The Sandpiper", "Who's Afraid of Virgina Wolf?" and "The Taming of the Shrew" may have veered wildly in their quality as films, but they all raked in the bucks. So potent was the Burtons' drawing power, producers naturally assumed the ticket-buying public would see the fabled couple in anything.

Which brings us to 1968's "Boom!", a surrealistically nutty "art film" based on a less-then-successful Tennessee Williams play (The Milk Train Doesn't Stop Here Anymore) that Newsweek called "a pompous, pointless nightmare", the Hollywood Reporter derided as "an ordeal in tedium" and Time likened to "a couple of rich amateurs hamming it up at a country club frolic." 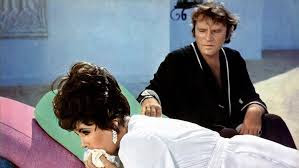 "Was it something I said?": Flora has a violent reaction to Chris' awful pseudo-mystical dialog.

"Boom!" was not only the first box office bomb of the Burtons' cinematic association; it was also one of the biggest bombs of the year. In fact, the failure of "Boom!" was credited with a significant dip in Universal's coffers for 1968.

Lots of reasons, but mainly because it was simply a horribly, undeniably bad movie. From its pretentious dialog to its zany supporting cast to Taylor's whacked-out wardrobe to its bonkers premise, "Boom!" is a golden gobbler from waddle to tail feathers--and a "must see" for any serious bad movie lover.

You know "Boom!" is going to deliver the bad movie goods the second it introduces us to Taylor as Flora "Sissy" Goforth: lying face down in bed, surrounded by servants, receiving a back rub from a hunky guy while a fluffy white yip-yap dog lounges near by. Then a richly robed fellow inquires, "Madame?" and hands her a glass of pineapple juice(?) from a silver tray. After taking a few sips, Flora gags, moans, thrashes about and then punches an intercom button gasping, "Pain! Injection!" When a nurse tries to get Flora to take another sip, she furiously bats the glass away, sending it crashing to the floor. 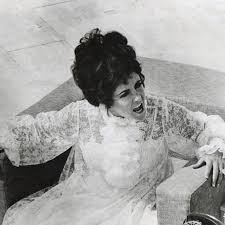 "I will not be ignored!": Flora in full fury.
Whew!

Flora, as if you didn't know, is the world's richest, bitchiest woman, a cross between Leona Helmsley, Princess Margaret and my high school gym teacher. Flora does nothing in half measures; she shrieks like a dental drill, throws operatic tantrums, spits out insults--and never in the same out fit twice. We're told she's buried five husbands and is suffering from an unnamed but fatal disease. Flora is also dictating her memoirs. Busy lady.

Home for Mrs. Goforth is a palatial mansion perched high atop a craggy mountain somewhere around Sardinia. She's attended by a fleet of servants, a mealy-mouthed secretary (Joanna Simkus), a flighty doctor ( Romolo Valli), a dwarf head of security (Michael Dunn) and his pack of snarling dogs, a squawking Minah bird, a chained monkey and a couple of sitar players. Hey, it was 1968! Sitar music was very big back then.

Into this cloistered circle crawls (literally) Chris Flanders, played by Richard Burton in a role originally essayed on Broadway by Tab Hunter (!). If you're thinking a Richard Burton performance would easily improve upon a Tab Hunter performance, think again. Despite his obvious talent and charisma, Richard Burton racked up an impressive list of cinematic stinkers that would make Sonny Tufts blanch: "The Wild Geese", "Candy", "Buebeard", "A Circle of Two", "The Assassination of Trotsky", "The Exorcist, Part 2: The Heretic", "Dr. Faustus", "The Medusa Touch" and, yes, our current feature. Burton plays a wandering mystic with the unfortunate habit of showing up at the bedsides of rich ladies before they kick the bucket. This has earned him the nickname "The Angel of Death" among the smart set--but could it be possible that Chris is a real angel? The movie goes back and forth on this issue, sometimes hinting yes, other times hinting no. But, hey, it was 1968! This kind of purposeful ambiguity was very big back then.

While Taylor and Burton duke it out over who can give the most over-the-top performance, the actor/playwright Noel Coward appears on screen as "The Witch of Capri", an old friend of Sissy's she invites over for dinner. After Taylor, Coward has the best entrance in the flick: dressed in a natty tux, Coward sniffs, "The bitch would have me over at high tide so I would look like a piece of sea weed!"... as he's carried into dinner on the shoulders of a hunky deck hand! This bit of showmanship almost steals the movie, until Taylor shows up in a jewel encrusted Kabuki evening gown accentuated with a head piece that resembles a gigantic puffer fish plopped on her noggin. This costume has to be the wackiest get-up in film history--try as you might, you can't take your eyes off it, so much so that you'll have a hard remembering what Sissy and the Witch discussed over the course of their long meal, but it probably doesn't matter anyway. 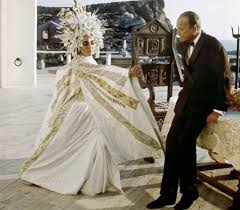 The Bitch and the Witch compare evening clothes.

As all pretentious, artsy, pseudo-intellectual 1960's nonsense must, "Boom!" ends with Flora succumbing to the very thing she was fighting against--no, not someone showing up at a soiree wearing the same dress as her--but death. While the poor dear is laid out on her bed, deader than a door nail, Chris takes her Krupp diamond ring off her finger and plunks it into a goblet of wine. Then he throws the glass down to ground below, cackling wildly...which means, what, exactly? Beats me. But, hey, it's 1968! Open endings to movies were very big back then.

It took me three tries to watch "Boom!" in its entirety. Just for the record, it took me three tries to pass my driver's test. Watching this movie is a tense, mind-numbing experience, like waiting at the DMV or having to endure a series of blood panels. As Flora Goforth, Elizabeth Taylor screams, insults, coughs and bitches like a drag queen on steroids. "Get your fat ass and sneaky grin off this terrace!" Flora hollers at her doctor. "What's human and inhuman is not for human decision!" she sneers at her long suffering secretary. "You've got more things going for you than your teeth, baby" she hisses under her breath to Chris. "Sissy Goforth is not ready to go forth yet and she will not go forth until she is ready!" our heroine rages at one point. As Roger Ebert would say, Taylor knows the words, but not the music. Her Flora Goforth is suppose to be a force of nature who refuses to succumb to the inevitable; in reality, she's more like a grouchy lady who yells at her neighbors all hours of the night "to turn down that damn stereo" or "shut that dog up before I do."

As for Richard Burton, his mystical, hippy-dippy Chris is merely a self-satisfied jerk, declaiming his lines in that famous voice as if he's getting off on himself. His character isn't as flamboyant as Flora, but he's just as grating.

Of the supporting cast, Michael Dunn appears to be having the most fun as Flora's leather clad, whip cracking chief of security. His best moment is when he knees Burton in crotch--and appears to enjoy immensely. After the audience, Joanna Shimkus endures the most abuse as Flora's put-upon secretary, Miss Black. When Joanna finally quits her job, the dying Goforth instructs her to write herself a check for any amount and she promises to sign it. I hope Joanna wrote herself a big check. As the Witch of Capri, Noel Coward sports a nice tux. I hope he enjoyed the piggy back ride the studly deck hand gave him.

For the Burtons, the failure of "Boom!" marked the beginning of the end of their fabled partnership. I have often thought it was a mistake for them to make movies together. She was truly a product of the studio system, while he always did his best work on stage. It was the scandal of their romance and the tempestuous nature of their relationship that fascinated people, not their on-screen chemistry. But once they joined forces, Liz and Richard seemed to be on a quest to stuff as many turkeys as they could. Considering their track record, they succeeded admirably. I hope wherever they are, they're savoring their triumph.

The famous Burtons have another one of their famous battles.

Until next time, Save the Movies!