Beware, Evil Doers! "The Prince Of Space" Is Here!

Dear Bad Movies and the Woman who Loves Them readers: During these un-cetain times, humor and the love of movies are more important than ever. As my school remains in lock-down, I will continue to do my part to SAVE THE MOVIES and write funny, insightful posts about the worst movies ever made. Sincerely, Beth Arnold 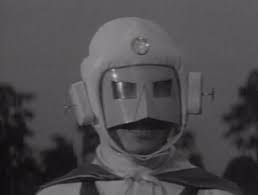 Huzzah! "The Prince of Space" has arrived!

Are you ready to begin another voyage to the bottom of the celluloid sea?

Our featured flick involves a brave (but mysterious) hero, a couple of obnoxious kids, a miracle rocket fuel and a menacing race of alien meanies that appear to have sprung from the mighty oak of Groucho Marx...and a flock of barnyard chickens. Ladies and gentleman, I give you, "The Prince of Space" (1958)!

Actually two episodes of a Japanese children's show patched together into a feature film, "The Prince of Space" is also known as "Planet Prince." Whatever title you use, it's still one wacky, weird space oddity.

The our story begins at the home of Dr. Macken (Ushiio Akashi). His son Johnny (Akira Asami) has invited two friends over for dinner: brother and sister Mickey (Kaji Kormori) and Kimmy (Midori Tsuzki). The siblings are the adopted children of Wally (Tatsu Umemiya), a part-time lab tech and boot black. Despite his meager salary, Wally is able to provide the kids with all the comforts of a two-parent home. When he arrives at the Macken's house, the adults praise his parenting skills to the skies. 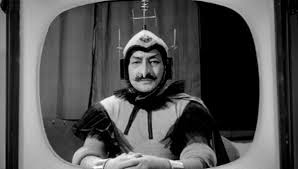 Ambassador Phantom from the planet Krankor is a fowl creature.

"Oh, it's nothing," Wally demurs. "I just wish I had something more to teach them than boot blacking."

"What's wrong with boot blacking?" Mickey, a Pugsly Adams sort, demands. "We like it very much!"

Before this conversation can go any further, the Macken's TV screen goes black. Then the face of Ambassador Phantom from the planet Krankor (Joli Aka) suddenly appears. Flashing Groucho Marx's bushy eyebrows and 'stache, along with a chicken beak nose, the Ambassador announces, "People of Earth! You will obey my orders...or die!!"

The Ambassador then explains his ship will be arriving in about eight hours, which undercuts the immediacy of his threat. Still, he insists nobody on Earth better try any funny business before he gets there. 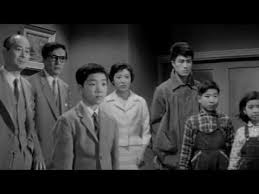 The "Prince of Space" cast totally spaces out.

The next day, everybody tries to act as if everything is normal. Then Ambassador Phantom arrives with his flock at Beaver Falls. He's met by a herd of reporters, photographers, police, military men, civil defense ministers, scientists and even Mickey and Johnny. Phantom repeats his original threat that the people of Earth must submit to his rule or die. To show he means business, the chicken-beaked meanie points his "disintegrator ray" at half a dozen bystanders, leaving only their hats behind.

Just when it looks like all is lost, another space ship lands. Out pops the Prince of Space (really Wally!), resplendent in an all white jumpsuit and visor.

"Ambassador Phantom!" the Prince commands, "leave this planet and never come back!"

Instead, Phantom orders his flock to shoot their ray guns at the Prince.

"Your weapons have no effect one me!" the Prince informs them. 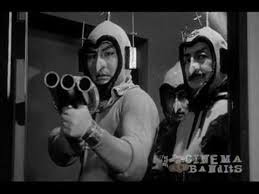 The beaked baddies of Krankor refuse to believe they are shooting blanks.

It's true. They don't. But the beaked baddies never learn. Time after time, Ambassador Phantom will order his flock to unload their firepower on the Prince. After the smoke clears, the Prince of Space stands before them fresh as a daisy. This inevitably causes the Ambassador to have a temper tantrum and yell, "You scum!" at the Prince--but you can't say he wasn't warned. Then the whole pointless process begins anew.

Come to think of it, the fact that the Krankorians' weaponry has no effect on him is the only thing we really know about the Prince of Space. I don't want to get too nit-picky, but the Prince's back story has more holes in it than a piece of Swiss cheese. For example, we are never told where he's from or who decided he could call himself the Prince of Space. Did he inherit the title? If he was awarded the title, what organization approved him? What qualifications did he have to meet? What kind of training did he under go? Is his position for life or is he a contract employee? Who does the Prince of Space answer to? Or is he just doing this for kicks?

Let's also consider his role as a single parent. What child welfare agency approved him? What references did he use? How did the fact that he's an alien from another planet get past the social workers? Since he's a super hero, and on the look out for evil doers 24/7, and must leave at a moment's notice to defend the Earth, is it even safe for him to have kids? Furthermore, how does the Prince of Space balance his role as an intergalactic crime fighter with parent-teacher conferences, term breaks and after school activities? Is he even able to stay home with the kids when they're sick?

While we're at it, let's take a closer look at Ambassador Phantom.

At every place of employment, big or small, there is always one employee who makes everyone else wonder how they keep their job. In " Prince of Space", that person is Ambassador Phantom. Although he's told a jillion times that his weapons will have no effect on the Prince, he still orders his men to fire them. This is not only pointless, but very wasteful. Phantom is also a short tempered bully who never takes responsibility for mistakes. When something goes wrong, he either screams "You scum!" at the Prince or announces, "Let's go kill some kids!" Nor is Phantom a good motivator of men; for instance, when it appears the Krankorians have actually given the Prince the slip, he gruffly declares, "Give everybody four hours off"-- he never thanks anyone or congratulates the team. In face of such incompetence, how does Phantom keep from getting canned? 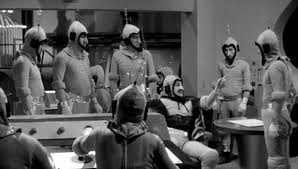 The worst boss EVER: Ambassador Phantom holds an editorial meeting.

Furthermore, Phantom calls himself "the Dictator of Krankor". How did he get this position? Did he over-throw the previous government? Set up a coup? And another thing: where are the female residents of Kankor? Is the lack of female companionship the real reason Phantom is so cranky?

Because "The Prince of Space" is two stitched together episodes of a TV show, the plot tends to go around in circles, loosely following this pattern:

1) Every time the Prince of Space and the Krankorians face off, the Prince reminds them that their weapons are useless against him. They still fire away and this makes Phantom mad.

2) The Prince gives Johnny and Mickey a button/gadget to push if they need him. Because the boys are often in danger--because of their own stupidity--they push this button/gadget a lot. The Prince always shows up, however. 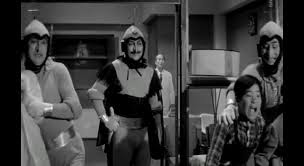 4) The planet Krankor appears to be made out of sugar cubes and Styrofoam blocks. It's "guarded" by a "giant" who looks just like Phantom. When we first meet him, the giant looks like he is sitting on a portable toilet and taking care of his personal business.

5) True to it's super-low budget, the "special effects" on "Prince of Space" are very nutty. For example, the Prince's ship looks like a Lady Remmington shaver. The Krankorian's radio device is a revolving, giant, metal watermelon. Phantom's ship, meanwhile, looks like a flying lemon zester--you can even see the string. The Prince's weapon of choice is either a magician's wand or a piccolo, which he waves around or points in the direction of his target. He never misses because the weapons of Phantom have no effect on him.

6) The Prince of Space always saves the day and nobody ever guesses that it's Wally.

Our featured presentation also has some priceless bad movie dialogue, such as this: 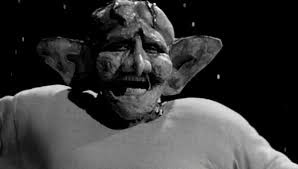 The "giant" that guards Phantom's castle: does he remind you of someone?

Scientist: "This is impossible!"

Phantom: "Be silent! I am Dictator of Ktankor!  I assure you the word 'impossible' is a word which for me does not exist!"

Prince of Space: "I'm close enough, thank you anyway. The stench of your foul breath is more than my stomach can stand!"

Phantom: (with the prince on his tail) "Release the caustic vapors!"

Phantom: (threatening the prince) "Come on out or we're gonna kill some children!" 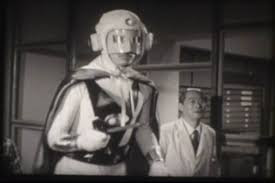 The Prince of Space is on the case!

As much as I enjoyed "The Prince of Space", it was a hard film to review; that's because it never really "ended"--it just kept going and going! Never the less, I don't doubt that the Prince of Space defeats Phantom, continues to be a good father to Mickey and Kimmie and keeps his true identity a secret.

With all the upheavals of late, I feel better knowing the Prince of Space is out there, watching over us. Don't you?

So movie lovers, please always remember, and never forget, to stay safe, stay home, wash your hands and, of course, SAVE THE MOVIES.