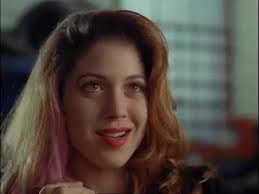 A long time ago (actually, 1992) in the land of Long Island, New York, there lived a girl named Amy Fisher.

In many ways, Amy was a typical 16 year old: she wore hair extensions, had a dog, drove her own car, loved rock'n'roll and had a boyfriend named Joey Buttafuoco. 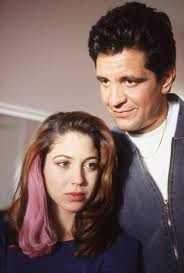 "A Bad Romance": Noelle Parker and Ed Marinaro as Amy and Joey

Then one fateful day, Amy showed up at Joey's house. His wife, Mary Jo--who did not realize Amy and Joey were "a thing"--opened the door. Shots rang out. Eventually, Amy was arrested, tried, convicted and sent to jail...which is how she became forever known as "The Long Island  Lolita".

The saga of Amy Fisher was one of the scandals of the 1990's. It had everything the tabloids loved: sex, guns, sex, adultery, sex, STD revelations, sex, prostitution, sex, money, sex and an under-aged girl at the center of it all. It spawned newspaper headlines, magazine cover stories, an Off-Broadway musical, a comic book, endless jokes from late night comedians, several books and three (count 'em three!) made-for-TV movies...two of which aired on the same night...a "TV first" that has yet to be duplicated.

"Amy Fisher: Her Story" (1992) was the first of these three movies to air on broadcast TV.  The producers paid Fisher $80 grand for the rights to tell her tale. After watching the flick, I don't know if Amy or NBC got their money's worth--although Junk Cinema lovers definitely hit pay dirt. 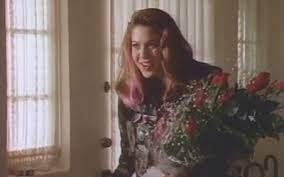 Joey sends Amy a "Pick Me Up Bouquet".


"Amy Fisher: Her Story" is a classic example of a once-mighty television staple: the "based on a true story" made-for-TV movie. Between 1970 and the 1999, TV networks were filled-to-the-gills with movies based on real life events: earthquakes, ugly divorce cases, accidents, women who shot/killed their husbands/lovers/kids/neighbors. Production companies would chase down anyone involved in a head-line making event (good or bad), buy the rights to their stories and then rush a movie into production before the event became old news. However, when Reality TV began rearing its ugly head, these movies (and their companions, the TV mini-series) began to disappear. An important genre of Junk Cinema, made-for-TV movies gave bad movie lovers a generous, all-you-can-eat salad bar of bad acting, bad hair and bad dialogue. For free! "Amy Fisher: Her Story" is a reminder of a time we may never see again.

When our tale introduces us to Ms. Fisher (Noelle Parker), she's already cooling her heels in jail. She's talking into a portable tape recorder, making a recording for Paul Makely (Boyd Kestner), a personal trainer Amy describes as "the only one I can trust" (Spoiler Alert: sadly, that won't prove true).

Although she narrates this tale with an "if I'd known then what I know now" resignation, as the film unfolds, viewers may begin to ask: what's thicker, Amy's Lon Guyland accent or her skull? If "Her Story" was meant to garner sympathy and/or understanding for Fisher's plight, the producers clearly bungled the job. After all, it's hard to work up any sympathy for a protagonist (real or imagined) who is relentlessly portrayed as a trashy, clueless, pea-brained bimbo--and Amy was involved in the production!

OK, back to the action: despite the trappings of middle class comfort, Amy explains her home life wasn't great. Her mom (Kate Lynch) was a spineless doormat and her dad (Lawrence Dane) was sexually abusive. There were fights about her grades, her pink hair extensions and her big mouth friends. So naturally she was thrilled when flashy car repair man Joey Buttafuoco (Ed Marinaro) began paying attention to her. 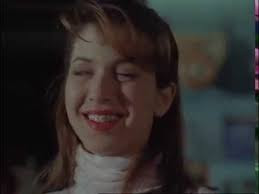 Amy basks in the attention of Joey Buttafuoco (eww).

"I mean, it was just flirting. Nothin' serious," Amy insists.

However, the flick makes it clear Joey knew an easy mark when he saw one. Then one day he drives Amy home, she invites him into her house and they end up in her bedroom. After a few suave words from Joey, they hit the sheets. When it's all over, a giddy Amy calls up her friend and squeals, "Theresa! You're not gonna believe what just happened!"

Now cuddlemates, Joey treats Amy to nights on the town, trips on his boat, small gifts, flowers and assignations at a variety of no-tell motels. She's head over heels in love, but not everybody approves of her main squeeze. "What do you see in this guy?" one of her friends demands.

"He loves me, we have great sex and he fixes my car!" Amy gushes.

However, once the glow of  new love wears off, Amy begins to want more from Joey. She wants him to open up, share his feelings and reassure her that they have a future together. She also wonders if Joey might be, like, taking advantage of her. 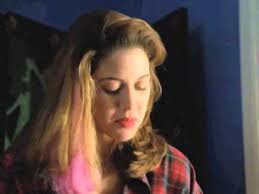 "He loves me, he loves me not": Amy begins to worry her relationship with Joey isn't built to last.

"When you said 'go out', I didn't know you meant a deli sandwich and a motel," Amy complains at one point.

Later on, Amy lectures Joey, "A relationship is about more than sex!"--although the filmmakers suggest Joey clearly disagrees. Or as the author of Bad TV  Craig Nelson put it, Joey's "obviously just happy to be getting his peppers popped."

As the course of true love (or lust) never runs smooth, Amy and Joey break-up for a while. However, when they reunite, Amy is thrilled--except for one thing. Joey (Amy says) got her involved with an escort service (which he denies). In her tapes to Paul (more about him shortly), Amy says she hated being an escort, but she liked the money. Besides, Fisher felt she had to "prove herself to Joey"(?)

The only good thing about Amy's new side gig is it provides "Her Story" with one of it's best scenes, set in the girl's bathroom at Amy's school. 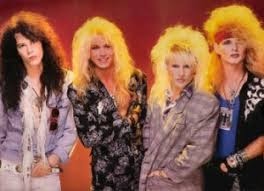 As the gals gather around the mirror to fix their hair and make-up, a nameless big mouth with big hair taunts Amy about losing her job at the local mall. Then sneers, "Not that Fisher needs (a job) with the auto mechanic paying her bills."

"Not that Fisher needs minimum wage when she can make a $100 bucks an hour," Amy snaps back.

"Doing what?!" the big mouth demands.

"You're a hooker!" gasps the big mouth. 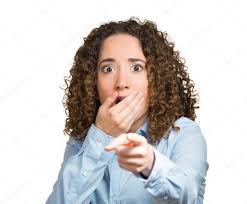 A classmate of Amy Fisher's is shocked how she earns her money (hint: it's not working at McDonald's).

As the other gals stare in stunned silence, Amy wises them up about the "duties" of an "escort": "I eat dinner at fashionable restaurants. I drink fine wine and enjoy intelligent conversation with mature men."

And with a toss of her head, Amy flounces out.

Of course, in her heart-of-hearts (and in her tapes to Paul), Amy feels differently: "Gawd, I wish it was all true," Amy laments. Adding, "If Joey loved me, it had to be OK."

Now, about this Paul fellow. He's a personal trainer at the gym Amy works out at. Like Joey, he's older and has a live-in cuddlemate. Also like Joey, when Paul shows Amy some attention, she's over the moon. When he and Amy begin dating, Paul reassures Fisher it's no problem, because he and his  "old lady" have "an arrangement." And one more thing: Paul likes to film himself and his cuddlemates when they do The Nasty. Soon enough, Amy joins the list of Paul's "co-stars." 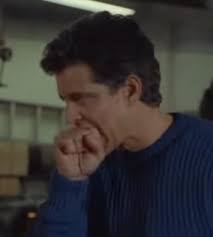 Ed Marinaro as Joey Buttafuoco: Biting the hand that feeds him?

Despite the slimy attentions of Paul, it's Amy's demented love for Joey that finally makes her buy a gun and confront Mary Jo. As soon as she's arrested, Joey naturally denies the two were ever involved or that he's responsible in any way for Amy's behavior. Needless to say, Amy was horrified and broken-hearted by Joey's public statements (the movie points out Amy passed a lie detector test to support her claims that they were a couple).

Sadly, the betrayals would continue. As "Amy Fisher: Her Story" wraps up, the producers present an afterward that states Amy did 5-15 years in the joint for shooting Mary Jo. They also reported that Paul released his sex tape with Amy for "an undisclosed sum". Shortly before her sentencing, he would release another tape, recorded "without Amy Fisher's knowledge or approval", where she bragged about wanting a sports car for her pain and suffering.

When Amy's real life lawyer pointed out that his client was betrayed by all the men in her life, you have to agree he has a point.

By airing tele-flicks like "Amy Fisher: Her Story", the Big Three networks hoped the sensational aspects of these cases would draw in viewers and create big ratings--which they did. If critics took them to task for tawdry subject matter, the networks could point out that stuff like the Amy Fisher saga was a current event and television showed made-for-TV movies about real events all the time: the OJ Simpson murder trial, the battles over Baby M, cult leader Jim Jones and "The May Flower Madam" Sydney Biddles Barrows, just to name a few. Besides, the suits could also argue their films had an educational value, too: Amy Fisher's tale could act as a warning to school girls about the dangers of older men on the prowl, as well as to married men who might consider cruising high schools for dates. 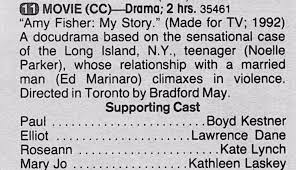 A TV Guide listing for "Amy Fisher: My Story."

Now, you may have noticed that this post hasn't spent any time on the film's acting. That's because there's not any acting in the film. Considering how quick this flick was made, it's enough that the camera was in focus. Conveying the complexity of the characters' motivations was not the point; getting the film shot was. Still, Noelle Parker as Amy did manage to suggest a girl so desperate for love and attention she's take it from anyone--including a lunkhead like Joey Buttafuoco.

So what life lessons can we glean from "Amy Fisher: Her Story"?

#1--Just because you sell the rights to your story, don't expect to be portrayed favorably. As noted earlier, Amy Fisher was involved in this production and she comes off thick as a brick.

#3--If a married person or a person in a long-term relationship says they have "an arrangement" or "an understanding" with their cuddlemate that allows them to date others, run! 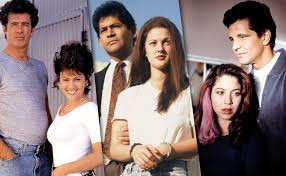 #4--Teenage boys will do just about anything for sex.

#5--The bigger the hair, the smaller the brain.

So movie lovers, please always remember, and never forget, selling your story to a TV production company and selling your soul to the Devil are pretty much the same thing. And, as always, SAVE THE MOVIES. 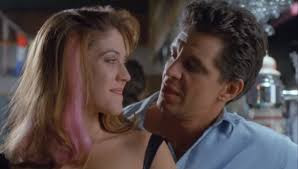