Jane Fonda Does Her Thing (Whatever That Is) In "Barbarella" 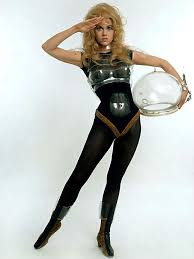 Far Out Space Nut: Jane Fonda suits up for duty in "Barbarella"(1968).

Jane Fonda has won two Oscars, been a pioneering film producer, a successful author, released many fine fitness tapes and has been married to Roger Vadim, Tom Hayden and Ted Turner, respectively.

While many aspire, but few reach the heights of sheer awfulness that Jane and her co-stars do in this hippie-dippy, soft-core, psychedelic space oddity. The fact that Fonda survived this cinematic suppository is pretty amazing, really.

Based on an adult French comic book, "Barbarella" was directed by Jane's then-hubby Roger Vadim and written by seven (count 'em seven!) scriptwriters, including Terry Southern, who gave us the screenplays for "Dr. Strangelove" and "Easy Rider", along with the novel Candy (which he co-authored with Mason Hoffenberg). Despite an eccentric cast that included Anita Pallenberg and Marcel Marceau (!), way-out costumes by Jacques Fonterey and Paco Rebanne and F/X that makes "Rocky Jones, Space Ranger" look like "Blade Runner", Jane Fonda is the main attraction here. She may not like it, but "Barbarella" is Jane's epic star turn, the role history will remember her for and a shrine to 15 year old boys everywhere--all at the same time!

The year is 40,000 and "five star double rated astronomical aviatrix" Barbarella is finishing up her daily duties (which are never explained) when she's contacted by the President of Earth (Claude Dauphin). The scientist Durand Durand, creator of "the Positronic Ray", has crash landed and gone missing. Because Earth has been "pacified for centuries", should Durand Durand (or anyone else) show up unannounced with his weapon, the results could be deadly. Thus, it's up to Babs to travel to the Tau Seti solar system and find Durand Durand before it's too late.

Settling in to a space ship covered in yucky shag carpeting and guided by a lisping computer named Alfie, Barbarella crash lands on the planet Lythion. A frozen waste land that's home to blue bunny rabbits, Babs meets twin girls who utter gibberish and conk her on the head. The girls hustle Barbarella to an abandoned space ship that is home to dozens of feral tykes in day-glo wigs.

But these kids aren't interested in small talk. Instead, they tie Fonda up and set off an army of walking dolls with chomping metal teeth. As the dolls (who do look creepy) begin to bite and scratch her, Barbarella threatens, "I'll tell your parents!"--to no avail.

Lucky for her, the whip cracking, fur-suited Mark Hand (Ugo Tognazzi) and two helpers show up. Hand is a "Catchman" who makes sure the planet's feral kiddies stay put in forests and caves "until they reach a serviceable age." While his leather-clad assistants herd the gibbering youngsters off, Mark frees Barbarella and offers to repair any damage to her ship. Delighted, she informs Hand that he'll receive "a recompense from my government" in return for helping her.

How very nice, but Mark has a different kind of recompense in mind: instead of a government check, he'd like to have sex with Babs the old fashioned way. This surprises our heroine, who is use to taking "pleasure pills" with individuals who match her "psycho-cardiogram." Back on Earth, see, flesh-on-flesh sex is considered "too distracting" and nobody does it anymore. Still, Babs agrees and soon enough, the plastic sails of Mark's ship become engorged as the vessel glides in endless circles on a frozen pond.

Things must have worked out great, because when we next see her, Barbarella is lolling in Mark's bed humming a merry tune.

Guess the barter system has it's advantages after all.

Her ship fixed (in more ways than one), Barbarella next jets off to the city of SoGo, where Durand Durand is believed to be held. Unfortunately, our "five star double rated astronomical aviatrix" crashes her vessel again, landing this time in a huge labyrinth outside SoGo. Soon Barbarella is introduced to a fellow named Professor Ping (French mime Marcel Marceau), a kindly chap who explains the labyrinth is where the exiles of SoGo are banished. These poor saps are doomed to walk around dazed and confused and half-naked until they eventually become part of the labyrinth. 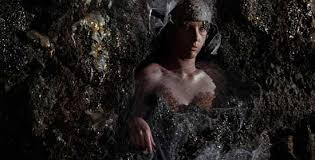 One of the poor souls stuck in the living labyrinth outside SoGo.

Also stuck there is Pygar (John Philip Law), the last of a breed of flying bird people who resemble angels. The meanies of SoGo blinded Pygar and the poor guy can no longer fly--although Professor Ping insists that Pygar has just lost the will to fly, not the ability.

While the Professor dickers around fixing Barbarella's space ship, she and Pygar head over to his nest. The next thing you know, Pygar is flying again, thanks to spending the night whooping it up with you know who "the old fashioned way."

With Pygar handling the flying chores, Barbarella now heads to SoGo, a dastardly place built on a bubbling sea of goo that feeds off negative energy ("the Matmos"). SoGo is run by the Great Tyrant (Anita Pallenberg, although Joan Greenwood provides the vocals), who strolls about the place in a leather catsuit and a black eye patch. She takes a gander at Barbarella and wants to know if she'd "like to play". Before she can answer, Barbarella is arrested and thrown in a bird cage, where dozens and dozens of parakeets attempts to peck her to death.

"This is really a much too poetic way to die," Babs gasps before she slides down a secret passage way.

Her sudden escape from the killer parakeets leads Barbarella to Dildano, an inept and forgetful revolutionary played by David Hemmings (of "Blow Up" fame). He offers to help Barbarella find Durand Durand if she helps him unseat the Great Tyrant. But before any of that can take place, Dildano wants to have sex with Barbarella, which is not an unusual request. After all, every guy Barbarella meets wants to have sex with her, so why would Dildano be any different? Except this time, Hemmings wants to use the "pleasure pills" and forgo the body-on-body stuff. 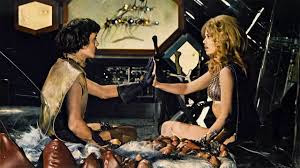 "Start the Revolution Without Me": Dildano (David Hemmings) is ready to over-throw the Great Tyrant, but not before he has sex with Barbarella.

This is a change of pace for Barbarella, considering the preferences of the other guys, but she's nothing if not accommodating.

So Hemmings and Fonda down the pills and touch finger tips. Seconds later, the duo start to vibrate. Smoke rises from their finger tips. They sweat. Then Barbarella's hair literally curls up. Dildano's hair, on the other hand, shoots straight up. Once this close encounter is over, the revolutionary is even more inept, but he seems satisfied.

This (supposedly) comic interlude with Hemmings and his rag tag group of revolutionaries (who keep forgetting their secret password) is merely a lead up to "Barbarella"s most famous and/or notorious scene: where the Great Tyrant's Concierge (Milo O'Shea) straps our heroine into his "Excessive Machine" and begins to, um, play the contraption like a demented Liberace.

"Oh, that sort of feels nice," Barbarella remarks as the Excessive Machine begins to direct ever-increasing levels of pleasure her way.

"Burning Down the House": Barbarella is too much for Durand Durand's Excessive Machine.

Barbarella was too much for it, get it?

"What kind of girl are you?!" the Concierge shrieks. "Have you no shame?!"

Just then it's revealed that the Concierge is Durand Durand. Turns out living in SoGo (and breathing the Matmos fumes) has not only totally corrupted the scientist, it's aged him considerably, given that he's suppose to be 25 or so.

This revelation, meanwhile, is just one of many plot points that crash into each other like bumper cars as "Barbarella" races to reach its, er, "climax".

For brevity's sake, let's just say Dildano's revolutionaries attack SoGo at the same time Durand Durand unleashes his Positronic Ray, while Barbarella is trapped in the Great Tyrant's bedroom--with the Great Tyrant herself. That, in turn, causes the Matmos to boil over, destroying SoGo and its inhabitants in crashing waves of goo. As for Barbarella, her "innocence" forms a protective bubble around her (and the Great Tyrant) that makes the Matmos literally burp them out of harm's way. 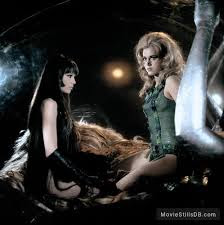 "What's a good actress like you doing in a scene with a bad actress like me?": The Great Tyrant (Anita Pallenberg) and Barbarella compare notes.

Like many flicks from the late 1960's and early 1970's, so much weird shit happens in "Barbarella" it begs the question, "Was everybody involved in this movie on drugs?" 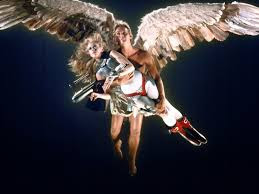 Up, up and away: Pygar (John Philip Law) gives Barbarella a lift.

However, it might be more accurate to say "Barbarella" isn't the result of a collective acid trip, but rather an attempt to recreate one. If that was director Vadim's goal, he succeed. But motion pictures require more than flashy visuals to blow our minds or at least hold our attention.

Such as acting. As Barbarella, Jane Fonda flounces around like Alice in Wonderland (or "Alice in Acid Land", which is a real movie), all wide-eyed and innocent, simply amazed at all the weird, kinky stuff going on. Because of her dedication to exercise, Fonda has the figure to wear the movie's outrageous costumes and her fluffy, pre-Farrah Fawcett 'do never goes flat, even in the over-heating Excessive Machine. Yet her performance never rises above the basic bimbo level and it can get tiring at times. Younger movie fans maybe surprised to learn that Jane wasn't considered much of an actress when "Barbarella" was released; she'd spent most of her time appearing in sex kitten parts in flicks like "The Chase" and "A Walk on the Wild Side" that didn't highlight any serious dramatic chops. Jane didn't turn her image around until co-starring in "They Shoot Horses, Don't They?"(1969). When asked where her head was during this crazy production, Jane replied, "Up my armpit, I guess!"

Hey, that's as good and explanation as any.

Casting '60's It Girl and Rollingstones muse Anita Pallenberg's as the Great Tyrant must have seemed like an ideal choice--on paper. Unfortunately, her inability to act posed a real problem, so British actress Joan Greenwood was called in the dub her lines. That proved to be a smart decision by Vadim, because the combination of Pallenberg's physical presence and Greenwood's trademark husky voice were a perfect match.

Everybody else in the movie--Milo O'Shea, Ugo Tognazzi, Marcel Marceau, David Hemmings--simply show up, do their thing and leave. The exception is Law, who, as Pygar, helps Barbarella complete her mission. But he, too, is mostly set decoration, a blank face and a ripped physique, modeling feathered jockey shorts and saying stuff like, "An angel doesn't make love; an angel is love." 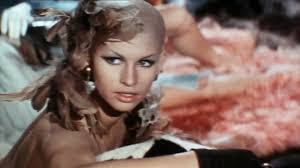 Taylor Swift?! No, it's just a resident of SoGo.

There's been talk about remaking "Barbarella", but I'm against it. Movies like our featured presentation are so much a part of their particular time and place that a remake/reboot/whatever could never duplicate what made the the original (good or bad) so unique to begin with.

Like I said, Jane Fonda IS Barbarella. Case closed.

So, until next time movie lovers, keep washing your hands, keep physical distancing, keep watching the skies and keep helping me SAVE THE MOVIES.