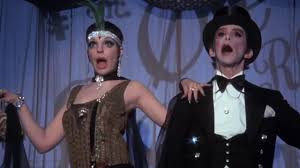 Sally Bowles (Liza Minnelli) and the Emcee (Joel Grey) welcome you to the Republican National Convention.

Have you seen the movie "Cabaret"?

Based on the short story Goodbye to Berlin by Christopher Isherwood, it was later turned into a play titled "I am a Camera". In 1966 it became a musical called --what else?--"Cabaret". Director Bob Fosse made "Cabaret" into a film in 1972, starring Liza Minnelli as Sally Bowles, Michael York as ex-pat Brian and Joel Grey reprising his stage role as the emcee of the Kit Kat Klub. The film won several Oscars and is justifiably hailed as a classic.

Have you watched it? You should. I've seen it four or five times and it's amazing.

I've been thinking a lot about "Cabaret" not just because of its excellence as a film, but because it reminded me of the just completed Republican National Convention. And that's not a good thing. 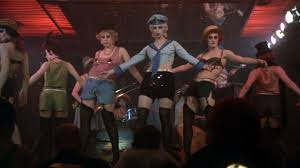 See, "Cabaret" takes place in Germany during the last days of the Weimar Republic and the rise of the Nazi Party.

The RNC, meanwhile, took place as our nation mourns 180,000 deaths (and counting) from COVID-19, record unemployment, racial strife, climate devastation via forest fires in California and hurricanes in Texas and Louisiana and an on-going effort to malign both the USPS and the integrity of mail-in voting.

"Cabaret" is set in the Kit Kat Klub, a cheerfully decadent nightclub where mud wrestlers and scantily clad dancers perform along with jugglers, a contortionist and singer Sally Bowles (who dreams of being a movie star).

The last night of the RNC took place at the White House, in direct violation of the Hatch Act, which is meant to prevent places of historical and/or national interest from being politicized by either party for their own gain and/or publicity.

For entertainment, the Kit Kat Klub gave its patrons dancers and Sally belting out "Mein Herr". The RNC, on the other hand, gave us Kimberly Guilfoyle (Don Trump, Jr's cuddlemate) screaming at the top of her lungs, Tiffany Trump announcing she's looking for a job and Donald Trump, Jr., with tears in his eyes, begging his namesake father to love him. 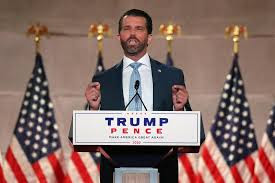 "All I Ask Of You": Donald, Jr. pleads for his father's love.

The emcee of the Kit Kat Klub tells his audience to "leave their troubles outside" because everything inside the club is "beautiful".

At the RNC, viewers and potential voters were also encouraged to forget their troubles because life was, if not beautiful, at least very nice. Sure, there were brief notes about how sad 180,000 deaths were, but, hey, it is what it is, right? And there were prayers for doctors, nurses, first responders and the like, but nothing major.

In "Cabaret", director Fosse showed the progression of Nazism in Germany via the changing dynamics of the audience at the Kit Kat Club and it's musical acts. For example, in an early scene, we see a Nazi officer kicked out of the club by the club's owner or bouncer. Later on, we see the club owner beaten up by a gang of Nazis while the emcee and dancers perform a slap dance inside. The Kit Kat Klub even mocks the Nazis in a goose-stepping kick line.

However, things have drastically changed when the emcee and a dancer in a gorilla suit do a number called "If You Could See Her Through My Eyes". Supposedly a plea for love and understanding (or perhaps a send-up of those sentiments), it ends with the emcee saying, "If you could see her through my eyes...she doesn't look Jewish at all." When "Cabaret" ends, as the camera pans the audience, you see Nazis sitting comfortably among the patrons.

Meanwhile, over at the RNC, a similar sea-change also happened. Donald Trump, once derided as a nut job by Lindsay Graham of all people, was lauded as a faithful husband, a devoted father, a tireless advocate for working families, a humanitarian crushed by the loss of life from COVID-19 and an "authentic person" who speaks his mind honestly and straight forwardly. 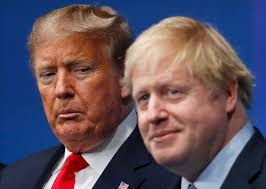 It was enough to make you do a spit take.

There was no mention of Trump's serial cheating (with Marla Maples and porn stars), remote parenting style, on-going investigations into his finances and tax returns, his shafting of employees for their wages, the bucks he's raked in for refusing to divest from his businesses while in office, his obsession with Twitter, the failure of Trump University, his "Birther" campaign, his close ties to Fox News (and Sean Hannity in particular), the over-whelming proof of Russian meddling in our national election or his pithy remarks about "shithole" countries and the delights of grabbing women by the snatch. And if anything bad was happening in the country, it was somebody else's fault, not his.

The patrons of the Kit Kat Klub weren't the only ones either A) denying the reality going on around them or B) simply going along with the tide because it could benefit them in some way. Main character Sally Bowles  may seem like a charming madcap flying in the face of convention, but as the film progresses, we see that she's in denial about everything: her life, her talents, her behavior and what its doing to her. She's fatally self-involved and could care less about the wreckage piling up around her. If things were going good for Sally, that's all that mattered.

The Sally Bowles of the RNC was Ivanka Trump. She came out beaming, so proud and happy to celebrate her father and the wonderful job he was doing as president. Ivanka saw no pandemic, no record job losses, no racial strife, no protests for social justice and reform, no governors begging Trump for PPE, no nurses wearing garbage bags and swim goggles and no people throwing fits about wearing face masks.

Stranger still, for a gal who promised she and the Trump administration would finally tackle the lack of affordable child care in this country, Ivanka didn't mention closed daycare centers, no harried parents trying to work remotely and help their kids with online schooling at the same time, no daycare workers making barely minimum wage for their efforts and no mention of daddy revoking the Lilly Ledbetter Fair Pay Act of 2009  that allowed women to sue for past pay discrimination. 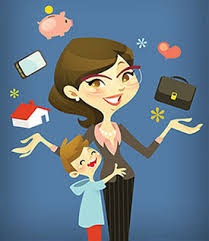 In the world according to Ivanka Trump, women are doing great!

Nor did she see a president who denied the existence of COVID-19, called it racist nick-names, recommended drinking bleach, refused to wear a face mask himself, promoted quack cures, pressured the CDC into changing their data collecting systems and claimed if the US tested fewer people, we'd have fewer COVID-19 cases.

Like Sally, if things were going good for Ivanka, that's all that mattered.

In her RNC speech, Ivanka marveled at all the places she's gone and all the people she's met and the stuff she has been doing. Although she didn't mention it, Ivanka and her husband have made millions from their Trump connections and/or businesses since dad was elected, while unemployment claims take weeks to process and even more weeks to produce checks. Like Sally, was this truth too painful for her to admit? Or maybe Ivanka feared dwelling on pop's failures would mess up her own future plans for higher office?

Instead, in the face of over-whelming evidence to the contrary, Ivanka sold a fan fiction about her old man and a revisionist history of the past four years that would make Big Brother from 1984 and Squealer from Animal Farm burst with pride. She celebrated the Donald Trump Donald Trump wants to be and might actually think he is. No wonder Ivanka's daddy's favorite: she knows what Donald needs and gives it back to him in buckets. Unlike her other siblings, she makes Donald look good.

When "Cabaret" ends, the Nazis have taken over Germany and the march to world war has begun. The audience knows the horrors that will follow, which makes the ending so powerful.

However, for us, there is still time. History is still waiting to be written. We have it in our power to change course and begin rebuilding what Trump and his enablers have ruthlessly torn down.

Watch "Cabaret" and then vote. 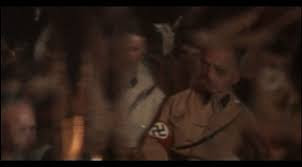