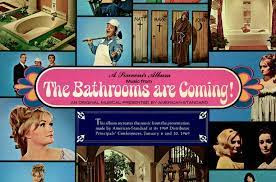 All Singing! All dancing! All plumbing!: "Bathtubs Over Broadway"(2018) celebrates the over-looked world of industrial musicals.

Do you have a favorite Broadway musical?

Perhaps it's something from the oeuvre of the late Stephen Sondheim, such as "Company", "A Funny Thing Happened on the Way to the Forum", "Sweeney Todd" or "Into the Woods"?

Could it be "Hamilton" or "A Chorus Line"? Or maybe it's the melodious stains of " The Wonderful World of Chemistry" or "Diesel Dazzle" that gets your toes tapping? 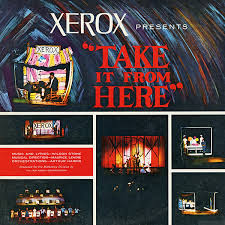 "Take it from Here": A 1971 industrial musical that billed itself as "the rollicking story of how Charlie Powers of Xerox Data Systems (finds) out what the Xerox Corporation is all about!"

What? You've never heard of " The Wonderful World of Chemistry" or "Diesel Dazzle" or "The Bathrooms are Coming"?!

Guess what, you're not alone. Which is why you must watch the delightfully demented, feel-good documentary "Bathrooms Over Broadway" (2018), currently screening on Netflix.

A hit on the film festival circuit, the winner of numerous awards and the recipient of a 100% "Fresh" rating on the Rotten Tomatoes website, "Bathtubs Over Broadway" chronicles the world of "industrial musicals": big, splashy Broadway-inspired entertainments made exclusively for big business from the 1950's to the mid-1980's.

The point of industrial musicals was to hype new products, teach better sales techniques or celebrate a rise in profits with singers, dancers, elaborate sets and costumes and, of course, original musical scores that rivaled the best of Broadway.

However, unless you worked for General Motors, Xerox, GE, Sears or some other big corporation, you probably never saw one of these productions. That's because industrial musicals were conceived and designed as in-house entertainment only, to be shown exclusively at national and/or regional sales conventions or conferences. 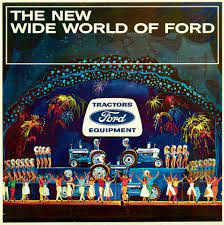 "The New Wide World of Ford"(1960) was made for the Tractor and Implement Division of Ford Motor. The program featured such hits as "Hayin' Line Ahead of its Time" and "More Power to You".

Yet no expense was spared in creating these shows, which often featured Broadway hopefuls like Martin Short, Hal Linden, Chita Rivera and Susan Stroman (a five-time Tony winning choreographer/director) in their cast and crews. Other big names included Bob Newhart, Florence Henderson and writers Sheldon Harnick and Jerry Bock, who gave us "Fiddler on the Roof".

Who's idea was it to alert the American public to this secret stash of musical oddities?

Young was given the task of finding weird music for a segment called "Dave's Record Collection." That's where he stumbled upon the soundtracks for industrial musicals. Before long, Young was hunting down these recordings for himself and linking up with fellow industrial musical fans, swapping stories and trading records. That lead to contacts and interviews with the performers and creators of these remarkable shows, including composers Sheldon Harnick, and Frank Beebe as well as singer/actors Peter Shawn, Sandi Freeman and Patt Stanton Gjonala (who warbled the dreamy "My Bathroom" for 1969's "The Bathrooms are Coming!").

When Letterman announced that his show was closing up shop in 1993, Steve, who had been with the program from its beginning, was at loose ends as to what to do next. His love of industrial musicals inspired him to write (with Sport Murphy) Everything's Coming Up Profits, the ultimate resource on "the golden age of industrial musicals". That, in turn, lead to the acclaimed documentary "Bathrooms Over Broadway"...and this blog post. 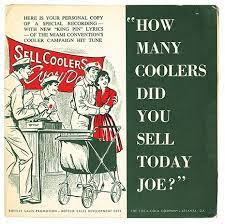 This record was given out to attendees of a cooler sales convention held in Miami...I think. If you know anything about this song or the production it was featured in, please contact me!

Examples of the crack pot creativity of industrial musicals can be seen in such extravaganzas as "The Wonderful World of Chemistry" (written by Michael Brown for the 1964 New York World's Fair), which sang the praises of such Du Pont products as nylon, mylar and corfam and featured the "Happy Plastic Family"; "Diesel Dazzle" (1966) about selling farm products and featuring the hit tunes "Sell the Truck" and "Reliabilt Hoedown"; "The Grip of Leadership" (1961) from the Coca Cola corporation, where songs such as "Packaging and Pricing", "Keep Things Jumping" and "I Hear America Singing" are found; and "The Bathrooms are Coming!" (1969) where ditties like "Bring Back Those Glorious Years", "Look at this Tub" and "My Bathroom" extol the genius of American-Standard bathroom fixtures.

Of course, "Bathrooms Over Broadway" does more than just illuminate the world of industrial musicals. It also subtly layers in the story of Steve Young and how becoming a fan of "industrials" opened him up to new friends and experiences. Especially moving are the bonds Young forms with the creators and performers of these shows, most of whom never got the recognition they deserved. That was especially true for composer Hank Beebe. Although he worked both on and Off Broadway, Beebe spent considerable time in the world of industrials, which disappointed his mother. She had higher aspirations for her son and dismissed his work there as "just commercials".

Meanwhile, Young's book Everything's Coming Up Profits is an excellent companion piece to Ken Smith's beyond brilliant Mental Hygiene: Better Living Through Classroom Films. Published in 1999, Mental Hygiene explored the role educational films played in the social development of America's post-war youth. Both tomes focus on an industry that thrived under the radar for nearly 30 years, capturing our country in a more optimistic and forward-looking time. What's more, both authors were initially inspired to write about these entertainment curiosities in hopes of preserving them for future generations.

Junk Cinema, naturally, is an ideal venue for industrial musical appreciation as well. I was first introduced to the joys of industrials on MST3K, THE GREATEST TELEVISION SHOW OF ALL TIME. That's where I saw "Mr. B Natural", a musical short from 1956. Produced by Kling Films for CG Conn Instruments, MR. B Natural was portrayed by the ferociously perky Betty Luster, who is sent  to bring "the spirit of fun in music" to needy, nerdy kids--whether they want it or not. The attention MST3K gave "Mr. B Natural" bought it out of obscurity and gave it new life as "a prime example of period kitsch" (Wikipedia).

Another industrial musical spotlighted by MST3K was "Once Upon a Honeymoon" (1956). Made by Bell Telephone and directed by Gower Champion, this "musical fantasy" told the story of Jeff and Mary, a young couple who haven't been able to go on their honeymoon because of problems besetting Mike's latest Broadway show. The couple's guardian angel (named Wilbur) is dispatched to Earth to help Jeff finish his score, while Mary daydreams about a new house with a phone in every room. A telephone even helps Jeff finish his song "A Castle in the Sky"!

Yes, the gang on the SOL were mocking these industrials, but they were doing it with love. Even Steve Young at first thought industrial musicals were too nutty for words--until he dived deeper into this  secret world and found it a place of pure imagination worth celebrating. 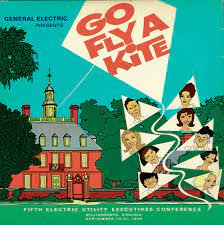 "Go Fly a Kite" premiered at GE's fifth Electric Utility Executives Conference in 1966. The music and lyrics were written by the team of Kander and Ebb, who's next project was the musical "Cabaret". Valerie Harper, TV's "Rhoda", was in the cast. Song selections include "Atom and Evil", "Big, Fat Wife" and "Supermink."

"Bathtubs Over Broadway" ends with a splashy, colorful show stopper called "Take That Step". Co written by Young and Beebe, "Take That Step" features many of the performers and fans we've met in the course of the flick, singing and dancing about the joys of taking chances and following your own bliss: "Take that step/ Shine your light/That left turn/Might be right/Don't wait for the world/To say 'OK',/Find your own way!"

For someone who writes a blog dedicated to saving bad movies, I couldn't agree more!

Therefore, for shining a light on this unseen era of musical creativity, Steven Young, Sport Murphy, director Dava Whisenant and all the unsung heroes of industrial musicals, Junk Cinema salutes you! 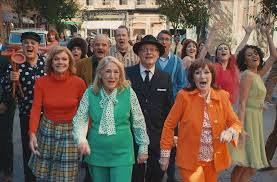 Steve Young (center in suit and hat) belts out "Take That Step" with his new friends from the wonderful, funderful world of industrial musicals.