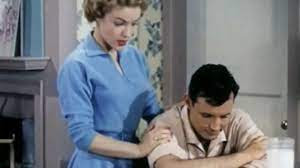 "We can still have sex at home, dear.": Mary comforts frustrated hubby Jeff when they learn their honeymoon must be canceled yet again in the musical short "Once Upon a Honeymoon"(1956).

Recently, I posted a review of the award-winning documentary "Bathtubs Over Broadway" (2018), which lifted the lid on the wonderful, funderful world of industrial musicals: big, splashy Broadway style entertainments created to motivate/celebrate salespeople from the 1950's to the mid 1980's.

While most "industrials" were live shows, companies also commissioned short films for promotional and motivational purposes. The most famous (or notorious) of these was 1956's "Mr. B Natural", where hyper-perky Betty Luster gads about extoling the "spirit of fun in music" on behalf of Conn Instruments.

Another totally bonkers short from 1956 came via Bell Telephone. Titled "Once Upon a Honeymoon", it's a musical/fantasy/fever dream where angels and telephones save a married couple who keep having to postpone their honeymoon.

Directed by Broadway vet Gower Champion and filmed in blinding Technicolor, "Once Upon a Honeymoon" begins on "cloud seven" in heaven. The Head Angel (Russell Hicks) is furious that angel Wilbur (Chick Chandler) has not been doing enough to ensure the happiness of Jeff and Mary (Ward Ellis and Virginia Gibson). See, Jeff is a Broadway tunesmith and his latest project has been beset with problems. By far the biggest problem is temperamental ballerina/diva Sonya (Veronica Pataky), the star of the show. She keeps insisting that Jeff rewrite the song "Castle in the Sky" over and over and over again. 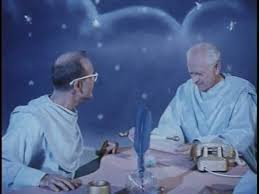 Angel Wilbur (left) has a performance review with the Head Angel (right). Notice the phone.

"I vant more vishing in the vishing song," Sonya demands (the flick never says where Sonja hails from, but Pataky was a native of Hungary, which explains why she sounds like Zsa Zsa Gabor).

Turning up invisible on Jeff and Mary's roof top, Wilbur arrives just as our cuddlemates learn their honeymoon plans have been foiled yet again. Jeff's boss Gordon (English actor Alan Mawbray) has phoned to report Sonya has rejected his latest rewrite and is threatening to walk if he doesn't send over another version--pronto!

"You said when I finished the score I could take Mary on our honeymoon!" an irritated Jeff retorts. "We've waited a year now and we're going!" (Author's note: My dad worked for Greyhound Bus Lines and he only got three days off for his honeymoon. Consequently, he also got no time off when my mom delivered me and my siblings. Instead, he tried to arrange his vacation time around her due dates, which didn't always work. I, for example, came early. But I digress...)

Gordon, surrounded by his suit-wearing, cigarette-smoking backers, insists Jeff has enough material at home to whip up another rewrite. Frustrated and disappointed, Jeff has no choice but to put down the phone, light up a cigarette and get back to work. In a trick that's suppose to show how much time has gone by, we see the ashtray on Jeff's piano is soon over flowing with cigarette butts (ewww). 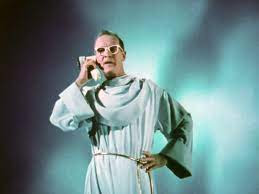 "Have I reached the party to whom I am speaking?": Wilbur (Chick Chandler) phones home.

"I couldn't write 'The Farmer in the Dell'," grouses Jeff.

Gathering up his uneaten lunch, Mary goes into the kitchen and begins singing. "I wish I had a castle in the sky," she trills. "Away up high, where blue birds like to fly! Just a cozy little castle, with a hundred rooms or more. With stars for windows, clouds for rugs and a rainbow for a door!" As she does this, Mary realizes that her fridge never closes properly, her faucet drips and her stove's pilot light must always be lighted when she wants to cook something or make coffee.

That's Wilbur's cue to start sprinkling angel dust (rim shot) over Mary, causing her to fantasize about a new kitchen that comes complete with "a bright red phone" that will come in handy when "friends call up to chat a bit!"

Still tripping out on Wilbur's angel dust (rim shot), Mary flounces into her living room and sings, "I wish my living room were all redone!" And PRESTO! Not only is Mary's living room redecorated, but Jeff has been put in white tie and ties and Mary is sporting a fluffy white gown. While hubby pounds away on the piano, Mary continues to sing, declaring, "It's nice to have a telephone to blend with my new drapes and rug--a living room that's all our own!" 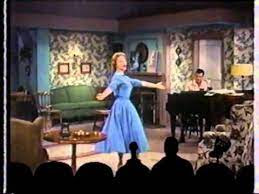 Mary sings about the joys of having a phone that "matches my new drapes and rug."(Note the MST3K silhouettes in the frame.)

Mary and Jeff then have a dance break, where they twirl around like Bobby and Cissy from "The Lawrence Welk Show". When that's over, Mary flits off to the bedroom--which, this being 1956, features separate twin beds.

"The bedroom should be changed completely, too," Mary warbles. "Perhaps a color scheme of gold and blue?"

As the bedroom magically changes, Mary pops her head up from behind a couch up and sings, "On second thought, I might try dusty rose..."

Then she runs over to one of the beds, flops on top of it, kicks up her heels and continues singing: "A lady likes to have a change her miiiind...just like a yellow room with turquoise and white...and maybe a telephone that lights up at night. I wish I may, I...wish...I...might."

Mary's reverie is broken by the sound of a ringing telephone. Racing to the hall way, she picks up the phone and finds the caller has hung up. Jeff, at wit's end, slams down on the piano keys and tells Mary to call Gordon; there's no way he'll have the rewrite Sonja wants today. Mary heaves a deep sigh and dials Gordon's number. Still on the roof, angel Wilbur throws down more angel dust (rim shot) on Mary and the phone. 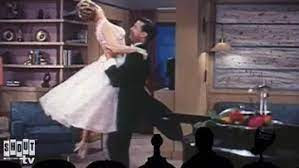 As Mary dials Gordon's number, the sound of the rotary dial sparks something in Jeff's imagination; he has Mary redial the number again and EUREKA! Jeff has the hook he needs to finish his song!

Soon Jeff and Mary are singing the new and improved "Castle in the Sky" together, even taking time to twirl around the front room. If you're wondering how the piano keeps playing while Jeff and Mary waltz around, invisible angel Wilbur has taken over the keyboards. But, wait! There's more! Boss Gordon suddenly rings in and our cuddlemates perform the updated version of the troublesome tune on the spot. Gordon, in fact, puts the call on speaker phone so Sonya (who happens to be in his office) can hear it, too. Needless to say, the rewrite a hit and Sonya declares, "I love it!" The show is saved!

Finally Jeff and Mary can go on their honeymoon. So our cuddlemates gather up their luggage, Jeff puts on a sport coat and Mary leaps into his arms. Out the door our smitten kittens glide, not even bothering to lock up. Wilbur, meanwhile, phones the Head Angel in heaven to triumphantly exclaim, "Mission accomplished!"

Like a Donald Trump press conference, "Once Upon a Honeymoon" is a weird, confusing yet oddly entertaining experience. Obviously a lot of money was spent on this and the performers on screen throw themselves 100% into the proceedings, even if the objectives of the flick remain unclear. 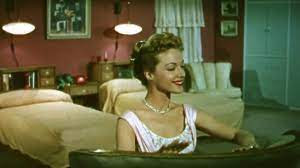 A transformed Mary marvels at her magically redecorated bedroom. Note the twin beds.

I mean, if this short was meant to sell phones, how come the phones play second fiddle to all the redecorating Mary sings so rhapsodically about? After all, Mary just wanted "a decent kitchen"--she never expressed any dissatisfaction with her phone or phone service. Likewise, if Sonya is such a pain-in-the-ass diva, how come we didn't see more of her? A few glimpses of Sonya's never-ending demands might have fleshed out this plot point. Finally, Jeff and Mary's marriage seems OK to me. Sure, they've had to put off their honeymoon for a year, but this doesn't seem to have caused any problems between them. In fact, Mary, the ideal '50's spouse, is nothing less than understanding about the situation.

The website for the National Film Preservation Foundation (!) asserts that "Once Upon a Honeymoon" "exemplifies the enthusiasm and excess of mid-1950's advertising." Indeed, Bell Telephone was so pleased with this flick, local phone companies were given free copies of the song "Castle in the Sky"!

So movie lovers, please always remember, and never forget, that while marriages are made in heaven, phones are made on Earth and some things are just meant to be crazy.

And SAVE THE MOVIES while you're at it.