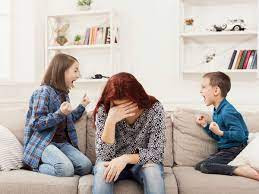 Being a mother is not for the faint of heart.

Let's see: Halloween, Thanksgiving, Christmas, New Years, Valentine's Day, President's Day, St. Patrick's Day and Easter are just a few of the holidays that have come and gone. What's the next big celebration? Mother's Day! (May 9th in case you forgot.)

Therefore, I've decided it would be fun to spotlight an assortment of Junk Cinema Gems that focus on the vital role mothers play in our lives and in our movies.

The first entry in this multi-part series is from the Golden Age of TV Movies, where Tori Spelling, Jacklyn Smith, Susan Lucci and Jane Seymour (among others) churned out processed, small screen celluloid cheese at a breathless clip, facing off against crazed babysitters, the mob, stalkers, studly ghosts, wayward kids, cheating husbands and even Satan himself...seven days a week!

(That last reference is a nod to "Invitation to Hell", a TV-er starring Susan Lucci as Old Scratch masquerading as the sexy owner of a lavish country club...with a script by Wes Craven of "Nightmare on Elm Street" fame.) 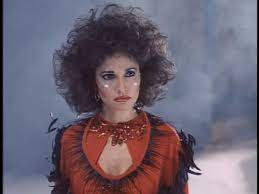 Erica Kane moonlighting as Vampira? No, it's Susan Lucci as the Devil (yes, that Devil) in the TV Movie "Invitation to Hell".

Of course, not all Made-For-TV-Movies were doom and gloom; sometimes they tried their hand at romantic comedies, period pieces and love stories. Which is a neat way to cruise into today's feature presentation, which poses the immortal question: Thinking of getting married?

Well, think again. Or remember this: You marry the whole family, not just your intended.

Because, like the biblical Plagues of Egypt, these nippers bring a series of disasters that threaten the newlyweds' plans for happily ever after in "Baby of the Bride" (1991), a made-for-TV Christmas movie that attempts to mine holiday yucks out of unemployment, unplanned pregnancy, custody battles and divorce. 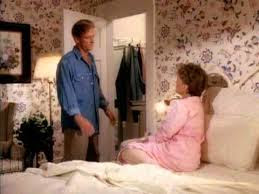 The fun begins when newlyweds John and Margaret arrive home from their honeymoon. Margaret's spacious house is all theirs, allowing the cuddlemates to have sex whenever they want. In fact, John has figured out that if they "save for four years", they can both retire and travel the world, which will give them the opportunity to do the nasty in as many foreign countries as they want.

Suddenly arriving in this marital Garden of Eden is Margaret's fitfully employed son Andrew (Conor O'Farrell) and his standard-issue TV daughters, Jersey and Amy. Seems he and his ex--who have never bothered to marry, by the way--are having custody issues, even though he has custody. Andrew also mumbles a lot about "moving to Canada", although he doesn't say why. Because he and the kids need a place to stay, Andrew and the girls move in with John and Margaret.

Next up is golden boy son Dennis (John Westley Shipp, two-time Day Time Emmy Winner and TV's "The Flash"). He's a hot-shot stockbroker who enjoys having sex with his female boss in his corner office. Rolling in money, belonging to a country club and living in a pricey condo, Dennis has the world on a string...until his female boss announces (post-coital) that the firm is making cut-backs and Dennis has to go. Then she hands him his severance check, straightens her skit and coolly leaves his office.

Unemployed and maxed out on his credit cards, Dennis is forced to sell his condo and--yes!--head over to mom's until he finds another job.

Which brings us to the sister act of the Becker family. TV veteran Kristy McNichol is Mary, a recent ex-nun who is now pregnant. How she found herself in this situation is apparently explained in "Children of the Bride", the first of three "Bride" movies made for TV; our current feature is the second entry in this trilogy of terror--did I forget to mention that? Well, know we all know. Anyway, Mary has moved in with sister Anne (Anne Bobby), an obnoxious loud-mouth who smokes and has been divorced twice--even though she doesn't look old enough to have graduated from college, let alone married and divorced (twice). 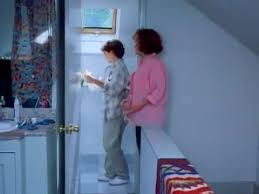 Cleanliness is next to Godliness?: Ex-nun (and mom-to-be) Mary (Kristy McNichol) and sister Anne (Anne Bobby) bicker over cleaning products and life choices.

Now is probably as good a time as any to mention that this family is Catholic. A very liberal Catholic family I'd say, since Margaret's first husband deserted her (and she in turn divorced him), Andrew has two kids with a woman he never married, Mary is expecting a child out of wedlock and Anne has been married and divorced twice. Nobody ever mentions getting or applying for an annulment and they still attend Mass. Who says the Catholic church hasn't lightened up?

OK, back to the plot. All this familial Sturm Und Drang is wrecking havoc on John and Margaret's robust sex life, not to mention John's nerves. See, John could handle being a step-father to four kids because the kids were all grown up and didn't live with them. John could also handle being a "young grandfather" or "uncle" to moppets Jersey and Amy because they lived in Florida. He never bargained on the whole tribe moving back home and bringing their problems with them.

Nor was John ready for Margaret to announce that she, like Mary, is preggers.

So what's a frazzled, overwhelmed, sex mad newlywed to do?

Up and leave his new, pregnant wife, of course. 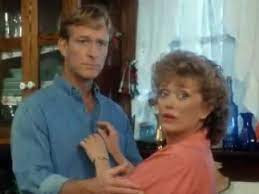 See, John never thought he and Margaret would have kids because, well, she already has four and, well, she'd started "the change"...or so they thought...which is why they didn't bother to use birth control, and, well, wasn't all that behind them? Weren't they going to retire in four years and have sex all over the globe?!

Margaret is crushed, of course, that John isn't happy about their blessed event--or that he's moved into an apartment. She's also upset that hubby insists her pregnancy was "forced" on him, as if John had nothing to do with it.

The kids aren't helping matters. Although Andrew has plenty of time to play basketball and dicker around with his truck, he hasn't made any moves to find a job. Poor Dennis is at least looking for work, but the best he can do is an offer to manage a jewelry store at the local mall. John agreed to hire Mary for his office, but she's soon on maternity leave. Andrew's ex then shows up with her rich new husband, who looks (and dresses) like a '70's porn star, complete with 'stache. Even though she ran out him and their girls, she now wants visitation. And loud mouth Anne has become involved in a push me--pull you romance with a cop named Nick (Greg Kean), who had the nerve to give her a ticket for driving past a four way stop.

The climax of all this frenzied activity takes place on (ho, ho, ho!) Christmas Eve, where the Becker-Hix family troops off to midnight Mass. John, conveniently enough, is helping to officiate when first Mary and then Margaret goes into labor. This, in turn, causes a disruption of the service, a mad dash to the hospital, dueling scenes of Mary and Margaret screaming in pain and the arrival of a healthy baby girl for Mary and a healthy baby boy for Margaret.

Best of all, John has changed his mind about being a dad and he and Margaret get back together. Dennis accepts the job at the mall. Andrew decides not to flee to Canada and instead work on visitation with his ex. Anne gets together with her cop beau. When her maternity leave is up, Mary will once again work at John's office. 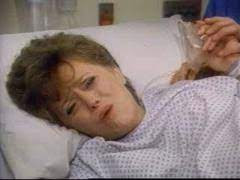 Who experienced more pain? Margaret in labor or the viewers watching the movie?

Not when you remember there's one more flick in the series.

Watching "Baby of the Bride" reminds one how truly awful the vast majority of TV movies were. Stuck with small budgets and hemmed in by short shooting schedules, made-for-TV-movies didn't have the time to "finesse" their subject matter. Therefore, it's not surprising most were shlockwurst on a stick. In this light, it makes you wonder how TV films like "The Autobiography of Miss Jane Pittman", "Brian's Song" and "Eleanor and Franklin" ever managed to get made.

Never the less, "The Baby of the Bride" sucks; this movie would suck under any circumstances, frankly. It's not that the basic premise isn't ripe with possibilities or that actors are flat-footed gargoyls who've never acted before. Rather, the characters--except for Margaret--simply aren't likeable: Andrew is a whiney dope; Dennis is a schmuck and harasser of women; Anne is a disagreeable loudmouth; Mary, the ex-nun, is a ditz and John leaves his wife when she needs him the most. Plus, he yammers endlessly about how unfair Margaret's pregnancy is as if he wasn't even in the room when junior was conceived--and this is from a guy who wanted to have sex in every country in Europe!

Meanwhile, the attempts at comedy--such as when Mary and Margaret go into labor at the same time--fall hopelessly, painfully flat--another surprise, considering the director (Bill Bixby) and the major cast members are veterans of TV comedy. Equally unfunny are such set pieces as Anne's attempts to "find" her sister a baby daddy by encouraging Mary to wear a tight red dress and join her at a swingin' night club. Soon enough, a guy comes over to Mary and suavely asks, "Wanna take a look at my Porsche?" 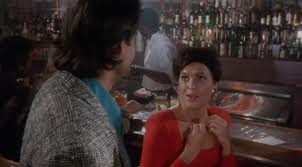 "Are you talking to me?": Inexperienced dater Mary is surprised when a man hits on her when she visits a single bar.

Get it? Mary the ex-nun is so out of the dating swim, she thinks if a guy asks if she wants to check out his fancy car, it means his car has engine trouble! Oh my sides!

Perhaps the most painful "comedic" scenes involve Anne and her would-be cop beau Nick trying some "Moonlighting"-style banter. For example, when Nick pays for Anne's drink at the swingin' club, she barks, "Are you trying to get on my good side?"

"Have one?" Nick zings back.

When he asks Anne to dance and she refuses, Mary jumps in: "Oh, Anne! He's not asking you to go look at his car! Go dance!" 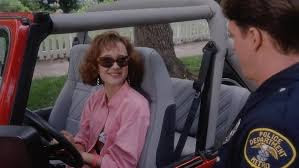 "Baby, You Can Drive My Car": Anne and Nick "meet cute" when she's cited for driving while over acting.

Then Nick tries again and Anne replies, "I'll tell you what! Instead of dancing, you close your eyes and I'll hide. When you get to 10, you open your eyes and find me gone!"

"You're good at this game!" Anne rejoins.

As one of the riffers on Rifftrax observed, "This is a Howard Hawks comedy for people who hate themselves."

So, kiddies, what does "Baby of the Bride" say about mothers and life in general? 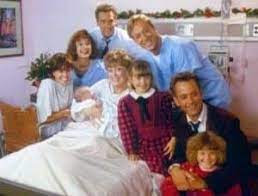 "Can we stop smiling now? My face hurts!": The cast of "Baby of the Bride" face the cameras.

*No matter how old you are, children will always need their mom.

*If you have sex, there is a 99% chance you'll get pregnant. You have been warned.

*Women don't get pregnant on their own unless they visit a sperm bank. Therefore, guys, when your cuddlemate is visited by the stork, don't act as if you had nothing to do with it.

*Yes, even YOUR mom has had sex. She might have even enjoyed it. Once.

*You want to watch a Howard Hawks comedy with people who don't hate themselves? Try "Ball of Fire", "His Girl Friday" or "Bringing up Baby" (Baby is a leopard, by the way).

And, of course, help me SAVE THE MOVIES! 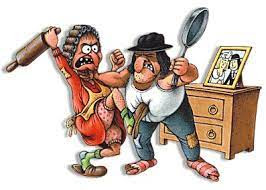 What "happily ever after" looks like for the rest of us.