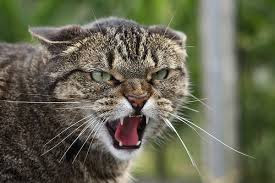 "Are you kitten me right meow?": Tucker Carlson blames cat cafes for America's supposed decline.
Tucker Carlson has announced via his perch on "Faux News" some pretty noxious stuff over the years: that white supremacy is a "hoax", that global warming is a joke, that COVID-19 vaccines are unsafe, that parents who have their children wear face masks are abusive, that the mob who stormed the Capital on January 6th were "gentle patriots" and that large segments of the male population are turning to drink and drugs because women are developin' fancy airs and refusing to marry them.

No matter how outrageous or egregious Tucker's claims might be, his bosses at Faux are always happy to look the other way or stoutly defend their star from anyone who dares question his judgment, taste or sanity. After all, Tucker's ratings are through the roof and he's making the Murdoch family (who own Faux) rich, rich, rich.

However, Carlson crossed a line--A BIG ONE--when he declared that cat cafes were poisoning the soul of our nation, unlike, say, racism or white supremacy.

"Does anyone in power really believe something called 'white supremacy' is the single greatest threat America faces?" Tucker asked on his Tuesday, May 5th, show. "No, of course not, no one thinks that way." 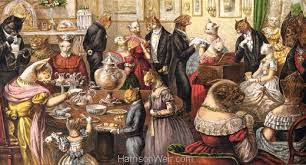 Snooty cat cafes (like this one) are a threat to the nation...according to Tucker Carlson.

"Those are the people who actually detest the country," Tucker proclaimed. "They're the ones working through the night to destroy it."

The owners of cat cafes are actively working to over throwing the government? Seriously? When would they have the time? After opening the cafe, serving the customers all day, tending to the cats, making the drinks and food, answering the phones, cleaning the johns, supervising the wait staff, making change, replenishing their supplies and balancing the payroll, you'd think the owners of cat cafes would be too bushed to over throw the government--I know I would.

Besides, the owners of cat cafes are like any other small business owner; they have to turn a profit if they want to stay open. Again, that leaves little time to agitate for revolution.

Since Tucker didn't provide any proof as to how cat cafes and/or their owners were undermining our government, you have to wonder if it's the people who patronize such establishments who are the real enemies in his book. After all, according to the website PetPlan, people who favor cats tend to be more open minded and creative than others. They also "generally look down on those they (think) are narrow minded."

The website also included research from Carroll University in Wisconsin which suggested cat people are "generally more educated" and scored higher on intelligence tests than the owners of other pets.

Furthermore, the website reported that, generally speaking, cat owners tended to do things their own way and follow their own paths in life; granted, this can seem "eccentric" and threatening to others who harbor more rigid views.

Hmmm. I think they may be on to something...

Despite Tucker's frequent declarations of hating "cancel culture" and loving democracy and personal freedom, I submit that's just window dressing. To paraphrase Napoleon in Animal Farm, Carlson believes all people are equal, but some people are more equal than others. 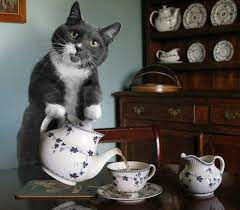 In his daily rants on Faux, Carlson insists that only people who think like he does, live like he does, vote like he does  and above all look like he does (i.e. white) are true, loyal Americans. Everybody else is an untrustworthy undesirable who refuses to conform to "acceptable" modes of behavior and therefore must be "cancelled" for the good of the republic.

So no wonder Tucker has his knickers in a knot about cat cafes: they attract educated, open-minded people who think for themselves (and like cats). Or maybe they're just people who think it's fun sip their coffee or tea and watch cats being cats. Either way, you can see how this kind of quirky independence would set Carlson on edge.

And if there's one thing Tucker Carlson and Faux News can't stand, it's people thinking for themselves.

After all, if people can think for themselves, there's no reason to watch Faux News, is there?

Cats have a long history of inciting rebellion. 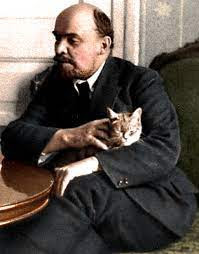 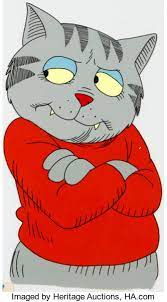 He wasn't restricted for nothin', baby!: "Fritz the Cat" (1972), the world's first R-rated cartoon, spoofed the radical 60's and '70's through a tom cat with a cheerful lack of morals. 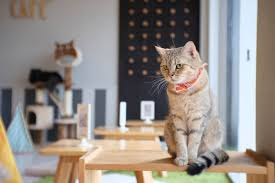 Fur-menting the revolution one soy latte at a time.