Cloris Leachmen Wonders If "Someone I Touched" Gave Her An STD 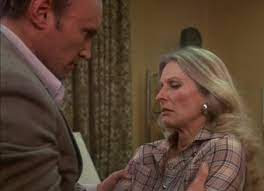 Cloris Leachman cringes in horror when she learns she's been cast in the VD TV movie "Someone I Touched"(1975).

Once upon a time, a married, slightly anxious book editor learns, after years of trying and many disappointments, that she has a bun in her oven.

Then her leisure suit wearing hubby bursts her bubble by announcing he has an STD--syphilis, to be exact.

Welcome to the wonderful, funderful world of made-for-TV-movies, circa 1975!

Today's presentation--"Someone I Touched"-- promoted itself as "The Powerful Story of Four People Whose Carefree Love Led to a Terrifying Epidemic". As all movies about carefree love must, the flick begins at the beach, where a bunch of carefree young people are playing volleyball. One of those carefree young people (Carrie, played by Glynnis O'Connor) becomes significantly less carefree when a County Health employee named Frank "like the city" Berlin informs her she has syphilis. 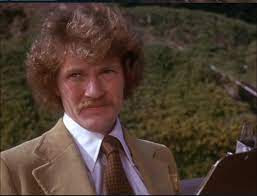 If Frank Berlin (Andrew Robinson) is looking for you, the news is never good.
How did Carrie get infected? Well, reason stands she did the nasty with someone who already had syphilis. But who could that be? Sam Hyatt (James Olson), who she met for a quickie after her shift at the grocery store? Obnoxious TV tech John? Perhaps that UCLA frosh named Tommy? Whoever it was, Mr. Berlin (Andrew Robinson) urges Carrie to list all her partners and hustle over to her doctor for treatment.

"If you don't get treated right away, it can be a bad scene," Berlin warns her.

Naturally, Carrie is, like, totally bummed that she has VD. She mopes around the house. She mopes around at work. Carrie mopes when TV tech John (Granville van Dunsen) loftily informs her HE COULD NOT have given her the pox because A) he's been on location and B) after location trips HE ALWAYS gets checked out by his doctor AND HE IS CLEAN! However, to prove he's not a total dick weed, John tells Carrie once she's VD free, she should get back in touch.

All this moping upsets Carrie's mom, Enid (Lenka Peteron, O'Connors real life ma). She's down in the dumps herself, and no wonder: her husband's left her, she's stuck in a lousy job, her kid doesn't pick up around the house and she's lost her looks. Enid nags Carrie to go to secretarial school so she can get an office job and meet a rich guy. Carrie, on the other hand, wants to stay at the grocery store because "it's union." Eventually Carrie breaks down and tells mom "she's in trouble", which Enid assumes is code for pregnant. Mom is surprisingly sympathetic--at first--until she learns Carrie has VD instead. 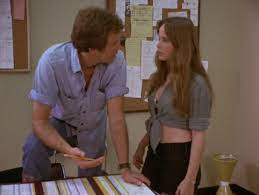 "I know what I am, but what are you?!": Carrie (Gylnnis O'Connor) tells John (Granville van Dunsen) that she's not a tramp, but he's definitely a jerk. Oh, and he has VD, too.

"Only tramps get VD!" Enid screams while furiously slapping her daughter silly.

Mr. Berlin, meanwhile, is busy tracking down Carrie's past partners; he arrives at Sam's office one sunny afternoon posing as a potential "client". Once told the news, Mr. Hyatt is less worried about himself and more concerned for wife Laura (Cloris Leachman). Remember, she's pregnant and she's suffered from infertility and "she's not very strong emotionally". The Hyatt's marriage has been strained as a result; in fact, it was during his separation from Laura that Sam impulsively hooked up with Carrie, explaining "I was looking down the barrel at 40" and, well, he had needs. As Sam tells it, he and Laura went on patch things up and she's now gotten pregnant but she's still tense AND HOW IN THE HELL CAN HE POSSIBLY TELL HIS WIFE HE HAS VD AFTER ALL THEY'VE BEEN THROUGH??!! Mr. Berlin is very understanding, but he insists Sam must tell Laura because her health and the health of their unborn baby depends on it.

Desperate to save Laura from heartache, Sam instead begs her doctor (Peggy Feury) to test and treat his wife secretly, without her knowledge. The doctor refuses, pointing out that's not only unethical and illegal, but batshit crazy, too. So Sam trudges over to Laura's office, which features a life-size, very scary clown doll--with a revolving head. Ignoring this truly freaky clown (no mean feat), Sam gathers up his courage to tell his wife the awful truth. Laura, meanwhile, thinks Sam is just there to weasel out of his impending fatherhood. So she launches into a long spiel about how she's always deferred to everybody else and put her needs aside and, well, she's fed up with it! While Laura yammers on and on, Sam suddenly grabs his wife by the shoulders and tells her he has VD.

How does Laura react? First, she freezes up like a popsicle. Then she narrows her eyes, twists her lips into a sneer and silently pulls herself from hubby's grip. Slowly stepping backwards, Laura looks as if Sam has just passed some really bad gas and she's about to barf as a result. Although she cannot articulate the words to express her revulsion, I think it would be along the line of this: "EWWWW!" 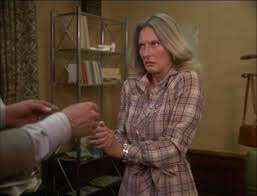 "Oh my God! Was that you?": Laura smells something icky coming from the direction of her husband.

Admittedly, the news that one's significant other has VD--and may have passed it on to you--is no laughing matter. It's clear the filmmaker intended this scene to be a dramatic high point, an important moment to drive home the gravity of the couple's situation--but that's not what happens.

Instead of sharing Leachman's horror and confusion, viewers are more likely to do a spit take or shoot popcorn kernels through their nose from laughing. Only Delores Fuller's reaction to Ed Wood's announcement in "Glen or Glenda?" that he wears women's clothes or Pia Zadora's "nervous breakdown" in "The Lonely Lady" match Cloris' reaction for unexpected zaniness. And remember: while Fuller and Zadora have the combined acting talents of a garden slug, Cloris was an Oscar winner (for "The Last Picture Show"), the recipient of eight Emmy awards, a member of the Actor's Studio--and her acting is worse than theirs! In fact, Leachman wouldn't embarrass herself this badly again until she appeared on "Dancing with the Stars" in 2008.

OK, so what happens next?

Laura hustles over to her doctor and gets tested. She's still in denial about what's swirling around her (and in her). Luckily, Mr. Berlin arrives to set her straight. See, according to the tests and blood work, Laura is the one with the more advanced case of VD--meaning she was the first member of the Hyatt duo to get infected. Therefore, she was the one who passed on the pox to hubby and started the "terrifying epidemic" the ads screamed about. Naturally, Laura is aghast at this news, which begs the question: who infected her?

Turns out while the Hyatt's were separated, Sam wasn't the only one hooking up: Laura enjoyed a brief tryst with her boss Paul (Kenneth Mars). Well, well, well! So off Laura marches to his swingin' bachelor pad and says, "We've always been able to talk. You find me attractive, intelligent, you even think I have talent. (Pause) So why didn't you tell me you had syphilis?!" 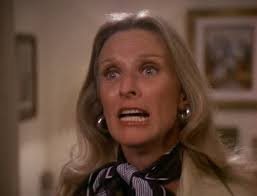 Laura Hyatt has reason to scream when she learns her boss gave her VD.

Paul is dumbfounded...or just maybe dumb. Anyway, he insists he meant Laura no harm: "I almost told you 100 times," Paul stammers. "I just couldn't get the words out..."

He also says he'd "read up" on VD and thought because Laura didn't mention she'd experienced any symptoms after their mattress marathon, "we were lucky". Besides, don't they test pregnant gals for that sort of thing?

Laura, concerned about her husband and unborn baby, isn't having any of this. Once she thought their brief fling was "was everything an affair should be", but "I feel so tacky now!" Even worse, Paul's silence about his condition might have caused Laura to give "birth to a baby with no arms!" Getting up to leave, Laura informs the still shaken Paul that she's told "the county health people" all about him and he'll have to to cough up a list of his past sexual contacts. Then she stalks out, slamming the door behind her.

It's an unwritten rule of the TV Movie Universe that no matter how serious the subject matter, you can't leave the audience in a blue funk. Therefore, in it's final moments "Someone I Touched" works furiously to end things on as positive a note as possible. Laura tells Sam about her affair with Paul and he forgives her. Paul goes to the county health department and informs them of all his past sexual partners. He later tells Laura and she praises his honesty; she also forgives him for giving her VD--but she still quits her job (and packs up that super creepy clown doll, too). Sam goes to the grocery store where Carrie works and apologizes for giving her the clap. Carrie, in turn, thanks Sam for taking the trouble to do so. Sitting in their car, ready to drive home, Laura feels her (healthy) baby stir. She and Sam put their hands on her tummy to share the moment. There's hope for the future, after all--as long as Laura doesn't put that super creepy clown doll in the baby's room.

So what have we learned from "Someone I Touched"? 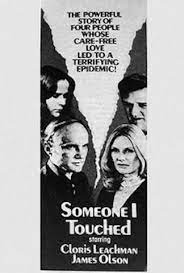 The understated ad for "Someone I Touched" that appeared in TV Guide.

* There's nothing more entertaining than a good actor giving a bad performance.

* There's no such thing as "care free love"--even in the movies!

* Dolls in TV movies were always creepy and dangerous. Don't believe me? Check out Talky Tina in the 1963 episode of "The Twilight Zone" and the Zuni doll from 1975's "Trilogy of Terror", which starred Karen Black. I'm old enough (sigh) the remember the commercials hawking that movie and they scare me to this day.

* The vast majority of TV movies were primed to scare people. Have sex outside of marriage? You'll catch VD. Or get pregnant and run afoul of illegal baby sellers ("Black Market Baby", 1977). Slack off controlling the varmint population? You'll get bit by a rabies-infected raccoon ("A Cry in the Wilderness", 1974). Leave hearth and home to pursue an acting career? You'll end up broke, unemployed and forced to pose topless ("Katie: Portrait of a Centerfold", 1978). Want to be a model? You'll be exploited by vicious agents, vicious photographers and vicious stage mothers ("Paper Dolls", 1982). Want to restore an old Victorian house? Think again. Your dream house could be possessed by evil spirits and Bette Davis ("The Dark Secret of Harvest Home", 1978). Get the point? 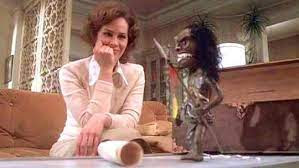 "Isn't he cute?": Karen Black's latest Amazon purchase has scared the bejeezus out of people (including me) since 1975.

So movie lovers, please always remember, and never forget, protect yourself and those you love by practicing safe sex, avoiding show business, staying in the suburbs and updating your rabies vaccinations.

And SAVE THE MOVIES, too.