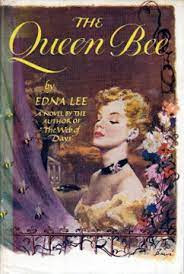 Joan Crawford felt the title character of the novel Queen Bee was perfect for her. How right she was!

I want to take a moment to talk about bees.

Did you know there are over 20,000 species of bees? The smallest is the Perdita minima, which measures only 2mm, while the largest, the Megachile pluto, boasts a wingspan of 2.5. inches.

There are honey bees, bumble bees, stingless bees, mason bees and leafcutter bees. Bees can be social and live in hives (as honey bees do) or they can be solitary and live alone (as carpenter bees prefer).

Bees make honey, of course, but they also produce beeswax, pollen, Royal Jelly and Propolis, which bees use to water-proof their homes. Propolis, by the way, is also a natural antibiotic. 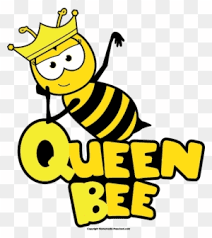 The star of any colony of bees is the queen. This is because of her size and birthing abilities. Male bees are wild to have sex with the queen, after which they promptly die (but at least they die happy). In order to maintain her position in the hive, the queen will seek out and kill her "sister queens" with her reusable stinger.

Who's the deadliest bee of all?

Without a doubt, that would be Eva Phillips, the centerpiece of the 1955 buzz bomb "Queen Bee".

As portrayed by Joan Crawford, Eva Phillips is a real piece of work. Her tongue is as sharp as an ice pick and her glare is as deadly as Medusa's. What's more, Eva's need to control and humiliate everyone around her rivals that of my 10th grade PE teacher. Easy going she's not.

In fact, the flick has barely gotten started when we learn that 1) Eva tricked her mega rich husband Avery (Barry Sullivan) into marrying her, 2) she caused the car accident that left an ugly scar on his face and 3) Avery's very serious drinking problem can be traced directly to his unhappy marriage (any attempt to get a divorce has been blocked by Eva threatening blackmail).

"We are not amused": Eva Phillips (Joan Crawford). Is it just me or does she look a bit like Better Davis here?

And that's not all! The woman Avery was suppose to marry, Sue McKinnon (Fay Wray), was so traumatized after being left at the alter, she suffered a nervous breakdown and is now behaving like Miss Havisham from Great Expectations (but she gets out more).

Oh, yeah, Eva either neglects her two kids or terrorizes them AND she once had a torrid affair with Jud Prentiss (John Ireland) who is now engaged to Carol Phillips (Betsy Palmer), her sister-in-law!

Well, as you can imagine, that last bit of information doesn't sit well with Eva, but I'm getting way ahead of myself.

"Queen Bee" starts with poor relation Jennifer Stewart (Lucy Marlow) arriving at the Phillips' mega-mansion. She's just graduated from college and Eva has invited her for a visit. At first, Crawford couldn't be nicer or more welcoming to Jen; she even spruces up her wardrobe, arranges for her to date hunky rich guy Ty McKinnon (William Leslie) and fills her in on all the social niceties. 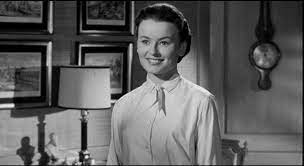 However, her relatives warn Jen not to be fooled by Eva's gracious hostess act. Comparing her to--what else?--a buzzing bee, Carol cautions Marlow, "She'll sting you one day. Oh, ever so gently, so you hardly even feel it--till you drop dead."

Of course, the naive Jennifer doesn't believe that's possible, even though Eva has slowly but surely turned Jen into her personal maid. What finally changes Jen's mind is watching Eva, riding crop in hand, smashing Carol's bedroom to bits as she complains about how rotten her in-laws are.

"I'm an outsider!" Eva seethes, waiving her riding crop around. "They hate outsiders...You don't know how they are! You don't know the things they've made me do to protect myself!" (Crawford starts pounding Carol's stuff into pieces.) "You don't know how they are!" Eva wails. "But you'll find out! As I have! How they whisper, small talk, laugh as if you have to be from the south to be any good!" (Eva's voice becomes shrill as she continues to destroy everything in her sight.) "Oh, they're so smug and namby-pamby! I wish I could get rid of them as easily as this trash!"

Finally calming down, Eva surveys the wreckage of Carol's room and replies, "Well! I've never known when I've been in such a temper!"--and walks away. 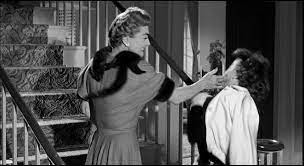 "A docile dog can be slapped by a courageous chicken"--An African Proverb.

Later on, Jennifer excitedly tells Eva that Jud and Carol are engaged. Her reaction? Crawford gives Jen a loud smack across the face and stomps off in a huff. See, once upon a time, Jud and Eva were having a torrid affair until Eva dumped Jud for Avery. However, Eva simply can't stand the idea of Jud being with another woman; if she can't have him, nobody can! So Crawford starts trying to stop the wedding.

First, Eva suggests that if Jud and Carol marry too quickly, the neighbors will think they "had" to get married. When that doesn't work, Eva puts on her frilliest house coat and meets Jud in the middle of the night.

"Isn't there anything left of us?" Eva throbs, before giving Judd a big, open mouthed kiss.

"You're like some fancy disease," Jud replies after he untangles himself. "I had it once; now I'm immune."

After Jud's rebuff, Eva brings out the big guns. She marches over to Carol and announces, "Any mans MY MAN if I want it that way!" Then she loftily informs her sister-in-law that the long list of women Jud has had affairs with includes her. Say it isn't so! This revelation so upsets Carol she wanders out to the horse barn and offs herself. 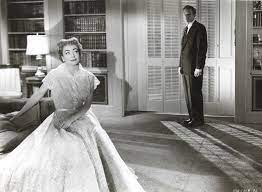 "Hmmm. What would Bette Davis do?": Eva wears her frilliest house dress to ensnare a wary Jud (John Ireland).

This last stunt proves too much for the lush Avery. So he cuts back on the booze and begins formulating a plan to kill Eva. It's too complicated to explain here, but it involves a party invitation, a fancy piece of jewelry Eva's always wanted and Avery and Jennifer admitting they're attracted to each other. However, once Jud figures out Avery's scheme, he decides to kill Eva instead.

So, on a dark and stormy night, Jud arranges to take Eva to a fancy-pants party...and promptly drives them off a cliff.

The next morning, Avery and Jennifer commiserate about the tragic accident that took Jud and Eva and  declare they're madly in love. The end or a new beginning? Since there wasn't a sequel, we'll never know.

On it's own, "Queen Bee" is pretty dreary. The only reason to watch is to witness Joan Crawford doing her stuff. Never in the same Jean Louis outfit twice, Crawford stalks, flaunts, flounces, schemes, snaps, screams, thrashes, slaps, insults, harangues, prims and preens. She's a tidal wave of star power and she knocks her co-stars over like bowling pins as she acts and acts and ACTS. In fact, "Queen Bee" is practically a one-woman show; the only reason Crawford has co-stars is because she needed people to be mean to.

By the time Joan was appearing in "Queen Bee", she was no longer had a studio contract. As a "freelancer", Crawford could accept work from any studio, but that meant finding the right projects for herself. Fortunately, Joan knew a hot property when she saw it. After she'd read the Edna Lee novel Queen Bee, she purchased the rights. When Columbia studios decided to make the book into a movie, Crawford was ready. Besides playing the lead, Joan insisted on Jerry Wald producing, Ranald McDougall handling the writing/directing chores and Charles Lang as her cinematographer. Furthermore, Joan wanted final approval over who would do her make-up, hairstyling and clothes. Columbia agreed everything. 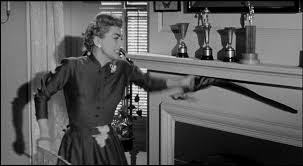 Eva Phillips trashing her sister-in-laws bedroom: "Well! I've never known when I was in such a temper."

Although you can admire Crawford for taking the helm in getting "Queen Bee" on the silver screen, Joan's snarling out-of-this-world performance didn't impress a lot movie critics.

The tome Bad Movies We Love  by Edward Margulies and Stephen Rebello (which includes "Queen Bee" in their chapter "Viva las Divas") declared, "From the moment Joan Crawford makes her grand entrance into this overblown penny dreadful...it's clear why this is the movie most beloved by the star's fans as well as by her detractors--and for exactly the same reasons." The authors point out that "there's not an inch of film wasted on anyone but Crawford" who "vamps around her mansion" while she cuts "the rest of the cast down to size."

Meanwhile, in his New York Times review, Bosley Crowther complained that director/writer McDougall had allowed Crawford to "flaunt her noxiousness and bad acting all over the place" while poor Barry Sullivan merely "blinks and boozes" and Lucy Marlow just "gawks and quakes". When Jud finally kills Eva, Crowther sniffed, "Nothing has really been achieved except a mawkish manifestation of cheap dramatics."

Clyde Gilmour (of Canada's McClean's Magazine) couldn't have agreed more. He described Eva "as a self-adoring psychotic empress" and felt the flick itself  was a "vintage item for the Joan Crawford Fan Club, but a bit of an ordeal for non-members like me."

Even Francois Truffaut--yes, that Francois Truffaut--wasn't impressed. According to The Early Film Criticism of Francois Truffaut by Wheeler Winston Dixon, an exploration of Mr. Truffaut's film reviews for Cathiers du Cinema before he turned to directing, the French auteur had this to say about "Queen Bee":  the acting "is not absolutely bad, but weak, very weak, including Joan Crawford's". He described the "mise-en-scene" as "clumsy" and felt Crawford resembled "both an octopus and a spider". The future director of "The 400 Blows" felt Joan was "absolutely ridiculous when directed by a filmmaker who precisely fears ridicule." Truffaut ultimately dismisses the flick as a "slightly indigestible and in the long run tedious cinematic food." He also added that "the future works" of director McDougall "I don't really feel like seeing." 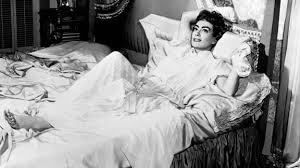 The "Queen Bee" relaxing in her boudoir.
Ouch.
Last, but not least, the website Flickchart ranked "Queen Bee" as number five on their "Twenty Worst Films of Joan Crawford" list. The top vote getters were "Trog", "Reunion in France", "The Hollywood Revue of 1929" and "Berserk". The inclusion of "The Hollywood Revue" surprised me. A Pre-Code musical and one of the earliest talking films, parts of  "The Hollywood Revue" were shot in color and it was a hit with both audiences and critics. Meanwhile, "Grand Hotel"--another classic-- makes it in at number 13. Go figure.
While "Queen Bee" may not have made much buzz at the box office, it did give viewers a Master Class in over-the-top scenery chewing. In fact, not even Patricia Neal in "The Fountainhead" or Faye Dunaway in "The Eyes of Laura Mars"--two completely unhinged performances by any measure--can top Joan's historionics here.
And wherever she, I know that makes Joan very proud.
So movie lovers, please always remember, and never forget, bees who have honey in their mouths (like Eva) have stings in their tails (also like Eva).
And while you're helping me to SAVE THE MOVIES, SAVE THE HONEY BEES, too. 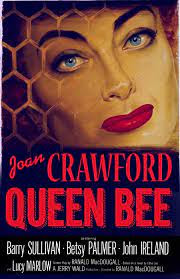 A movie poster for "Queen Bee": 100% nightmare fuel at its finest.