"Grease is the Word": Olivia Newton-John and John Travolta as Sandy and Danny in "Grease" (1978).

Singer/actress/health advocate Olivia Newton-John passed away on August 8th, 2022, after a long battle with breast cancer.

Born in Australia, Olivia moved with her family to England when she was 6. Olivia first found fame as the sweet-voiced soprano of such mid-'70's hits as "Have You Never Been Mellow?", "I Honestly Love You" and "Please, Mister, Please." Then, in 1978, she co-starred opposite John Travolta in the mega-hit musical "Grease".

A parody of 1950's cliches, "Grease" told the story of teenagers Sandy and Danny, who enjoyed a summer romance while vacationing at the beach. However, when the new school year starts at Rydell High, the duo are unexpectedly reunited. The problem? Sandy's the very definition of a goody-two-shoes, while Danny the second-in-command of the T-Bird gang. How could they ever be together?

However, thanks to a make-over that turns Sandy into a frizzy haired, leather clad siren who asks Danny, "How's it goin' stud?" true love prevails.

"Grease" was not only a world-wide smash, it's soundtrack spawned the hits "Grease (Is the Word)", "Greased Lightin'", "Summer Nights", "Beauty School Drop-Out", "You're the One that I Want", (Look at Me) I'm Sandra Dee" and "Hopelessly Devoted to You." The success of "Grease" made Olivia seem like The Next Big Thing in movies; alas, it was not to be.

Her next film was "Xanadu" (1980), a musical misfire that was as big a bomb as "Grease" was a hit. Although the film's soundtrack produced the hit singles "Xanadu", "You Have to Believe (We Are Magic)" and "I'm Alive", critics weren't impressed. Esquire magazine, for example, told its readers, "In a word: Xana-don't!".Variety called "Xanadu" a "stupendously bad film" and Leonard Maltin's Movie &Video Guide called the flick "flashy but empty headed." Today, "Xanadu" best remembered for inspiring the Golden Raspberry Awards (the Razzies) where the year's worst film achievements are celebrated.

However, Olivia didn't let "Xanadu"s failure get her down. In 1981, she released the song "Let's Get Physical" and created a whole new image for herself. She also married, had a child and opened a boutique called Koala Blue--I still have my Koala Blue shoulder bag, by the way.

In 1992, Olivia was first diagnosed with breast cancer. She would fight the disease on and off for 30 years, advocating for more research and treatments, especially the use of cannabis oil to help with pain.

For appearing in "Grease", for helping to inspire the Razzie Awards and for advocating for cancer research and treatment, Olivia Newton-John, Junk Cinema (and the world) salutes you! 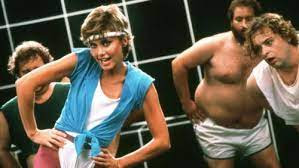