Is "Fight Club" a Cult Classic? 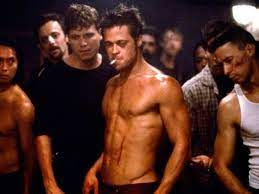 Are you a person of the male gender?

Do you feel trapped in your job? Disrespected by your kids? Sexually frustrated with your wife/girlfriend/live-in/partner/cuddlemate?

Are you fed-up with being blamed for everything from war to global warming to feckless capitalism to Ryan Seacrest and modern art?

Has life become so stressful and overwhelming that you feel like you're about to explode...or punch the first parking meter you see? 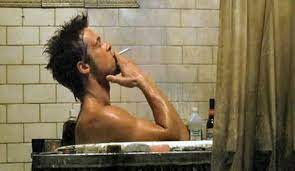 "Fight Tub": Tyler cools off after a bout.

If so, join the club.

Or, rather, join "Fight Club".

Released in 1999, "Fight Club"(based on Chuck Palahniuk's cult/pulp novel of the same name) was initally met with mixed reviews and dismal box office. Twenty three years later, however, this Brad Pitt/Edward Norton cage match has since been deemed a "cult classic" and reviewers have reappraised its cinematic merits.

My question? Does "Fight Club" deserve to be called a cult classic?

Let's ponder the issue, shall we kiddies? 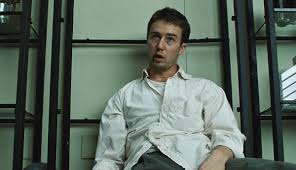 Our feature presentation begins by introducing us to an unnamed Narrator (who is called Jack from time to time), played by Edward Norton. A well-paid corporate drone, Narrator and/or Jack is single, depressed, unhappy at work, has a dink for a boss and suffers from crippling insomnia. Unable to get any medical help for his condition (or any sympathy, for that matter), Narrator/Jack attends various 12-step support groups as a "tourist" (a fake patient) so he can find a little compassion and feel free to cry.

While attending these groups, Narrator/Jack meets up with Marla (Helena Bonham-Carter), a poor, Goth girl who feels "dead inside" and attends support groups for the same reason he does. She calls out Norton for being just as big a fake as she is, so the two decide to "split" the groups they visit to avoid being discovered.

Narrator/Jack reluctantly complies. One blow leads to another and, seconds later, Tyler and Narrator/Jack are punching each others' lights out. Crazy as it seems, Narrator/Jack finds these fist fights liberating--and he's not the only one: the city is apparently crawling with men who find bare knuckle brawling a welcome release from the grind of their daily lives. Soon enough, Tyler has organized an underground "fight club" that's the hottest draw in town. 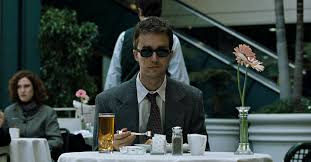 "Fight Grub": Narrator/Jack eats something other than fist.

But that's just the beginning. After (literally) tasting blood, Tyler morphs Fight Club into Project Mayhem: a secret, paramilitary group that bombs consumer giants, public art displays...and chi chi coffee spots. When Project Mayhem member Bob (the late Meat Loaf) is killed during one of these raids, Narrator/Jack is horrified; he'd met Bob at a support group for testicular cancer survivors and the two had become friends. The other Mayhemers, however, just shrug their shoulders and continue making bombs. This causes Narrator/Jack to freak out and have a much needed moment of clarity. Or, to put it another way, Narrator/Jack suddenly realizes that Tyler and his band of merry Fascist pranksters are dangerously off their collective dots and must be stopped.

Unfortunately, Narrator/Jack has also come to learn that their secret Fight Club is not so secret; Tyler has been setting up fight clubs all around the country, indoctrinating its members with his wacky screeds on capitalism, technology and manliness.

Oh, and one more thing: while retracing Tyler's steps and following his paper trail (via airline receipts), Narrator/Jack is STUNNED! SHOCKED! and HORRIFIED! to learn that HE is Tyler Durden! At some point, Narrator/Jack must have suffered a psychotic break (or an extreme trauma) that caused him to splinter into two, distinct personalities--like Tommy Lee Jones in "The Eyes of Laura Mars" (read my review of "The Eyes of Laura Mars" if this is confusing to you) and various soap opera characters.

Unfortunately, Narrator/Jack's attempts to stop Project Mayhem from destroying various credit card companies doesn't quite pan out. However, he does succeed in ridding himself of Tyler by shooting himself in the face (!?) which causes his Tyler personality to die or evaporate, I'm not quite sure which.

"Fight Club" ends with Narrator/Jack and Marla holding hands, watching helplessly as buildings  explode and collapse around them. Will Narrator/Jack turn himself in? Stop future violence? Get the professional help he needs? Or has Tyler and Project Mayhem become so entrenched in the fabric of our nation they can't be stopped? The film doesn't tell us, but my impression is the worst is yet to come.

"Did I do that?": Narrator/Jack surprises himself (and others) after he pulverizes a fellow club member into pulp.
Now we turn to the burning question if "Fight Club" qualifies as a genuine "cult classic".
According to the The Movie Web website, a "cult classic" is a "movie that has generated a significant and highly dedicated fan base over time."
Or, to put it another way, think of the cinematic universe as your typical run-of-the-mill high school. Traditional classics like "The Grapes of Wrath" or "Singin' in the Rain" are the "cool kids." Cult classics, like "The Rocky Horror Picture Show" or "Eraserhead", meanwhile, are the "cool misfits"--and proud of it (read Sophie Collins' full article for more detail).
Does "Fight Club" make the grade?
I say no. 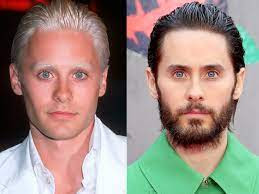 "Fight Bub": Jared Leto as "Angel Face" one of "Project Mayhem"s new recruits.
Why?
Because "Fight Club" is too much of a mainstream Hollywood production-- despite its trappings of male alienation, mental illness, underground clubs and Fascism run amuck-- to be a cult classic.
One of the things a cult classic must do is surprise its audience with their willingness to ignore or flaunt the rules of traditional movie making: the ominous ending in "Night of the Living Dead", for example, or the revelations about Leatherface and his family in "The Texas Chainsaw Massacre". Think, also, of the in-your-face flamboyance of "The Rocky Horror Picture Show" or "Barbarella". Then there is the cheerful bad taste and taboo breaking in John Waters' oeuvre.
"Fight Club" has none of that.
The flick was directed by David Fincher, who gave us "The Girl with the Dragon Tattoo", "The Social Network" and "Panic Room", among other titles. Dave is clearly at home with presenting dark, violent stuff  brewing just below the surface of society. Thus, he's not saying or showing us anything new in "Fight Club" that we haven't seen in his other films--unlike like David Lynch, who seems to have bottomless pit of crazy to draw from. 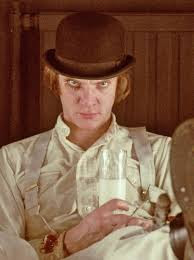 Malcolm McDowell as Alex in "A Clockwork Orange" (1971). With all due respect to Tyler Durden, this is what a scary, anti-social character who "enjoys ultra violence" looks like.
The acting in "Fight Club" is universally good. Pitt and Norton are two of our finest actors. However, their characters and their predicament has been done before: "American Beauty" (1999), "Falling Down" (1993) "Angel Heart" (1987) and the TV series "Breaking Bad" all feature guys being crushed by a world that has A) suddenly chosen to dispose of them or B) after acquiring all the symbols of outward success, these guys feel unfulfilled and hollow.
Even the plot point of a "square" (like Narrator/Jack) embracing the wild side is another familiar theme; think of Jack Nicholson's star turn in "Easy Rider", where his uptight lawyer George bonds with hippies Peter Fonda and Dennis Hopper, hits the road and begins smoking reefer--all to break free from his middle class shackles. Somehow, Narrator/Jack falling in with Tyler just doesn't have the feeling of danger or liberation the story needs to involve us in his plight.
Next, there is the surprise "twist" of Narrator/Jack and Tyler being the same guy. Sorry, but that wasn't much a shocker to me--or to anyone else who watched the flick. The film leaves clues about it everywhere: Narrator/Jack and Tyler are never shown together (unless they are alone); Marla (who is sleeping with "both" men) constantly asks Narrator/Jack, "Who are you talking to?" when the guys are supposedly conversing; she's also regularly befuddled as to why Narrator/Jack swings between "nice" and "mean" in the blink of an eye. That's because Tyler is Narrator/Jack's ID! Tyler does everything Narrator/Jack wants to do, but can't! If you need even more proof that this "twist" is far from a novel one, just watch "Frankie and Alice" (2010), "Walking Madison" (2010), "Primal Fear" (1996) or "The Other" (1972). They use it, too!
So movie lovers, I hate to disappoint you. The movie "Fight Club" is many things--violent, creepy, even funny in parts--but it's not a cult classic.
Although many are called, few flicks truly reach the heights of cult classic status. This is a very exclusive club and not just anybody can be admitted. 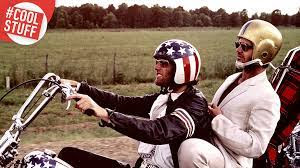 Lawyer George (Jack Nicholson) rides off into the sunset with Captain America (Peter Fonda) in 1969's "Easy Rider"-- a real cult classic, by the way.
Sorry Brad and Ed. Better luck next time.
So movie lovers, I leave you with a quote from Supreme Court Justice Potter Stewart (reworked a bit) to conclude this piece: "In the case of cult classics, I know it when I see it, and the motion picture involved in this case is not that."
Save the movies, too.