Junk Cinema Spotlights The "Deathstalker" Series Because, Well, Somebody Has To 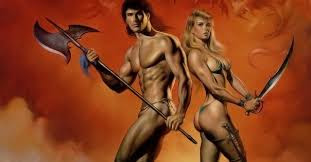 A poster for one of Roger Corman's "Deathstalker" flicks. Psst: The actors don't look anything like this in the movie.

If you're a regular reader of this blog--and, really, who isn't?--you know I published a post on "Deathstalker and the Warriors from Hell" in November of 2021. The flick in question was a piece of processed cheese lovingly churned from deep within the bowels of the Roger Corman film factory.

However, because the "Deathstalker" flicks are so eye-rollingly bad, I decided to profile them. Later on, I changed my mind and decided a "group profile" might be easier to produce and less time consuming on my part. Therefore, if you're wondering what the "Deathstalker" movies are about OR which entry in the series is right for you, relax. I have created a handy-dandy "cheat sheet" that explains everything--well, not everything everything, but a lot of everything--you need to know about this crummy, cut-rate "Conan the Barbarian" rip-off. 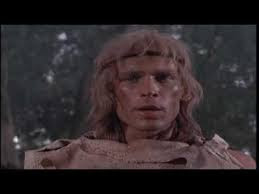 Let's begin, shall we?

There is a series of nine novels called Deathstalker written by Brit Simon R. Greene. They are described by Wikipedia as both a send-up and homage of 1950's science fiction. As created by Mr. Greene, the Deathstalker character is named Owen Deathstalker and he's "catapulted from a life of quiet luxury and academic pursuit" to fight evil forces and stuff.

However, the Deathstalker I am writing about is not based on this character! I don't know how Corman avoided copyright infringement etc.,  but he did, because the Deathstalker appearing in these flicks is no academic and he certainly isn't named Owen.

Then who is Deathstalker? 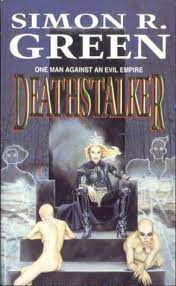 The first Deathstalker novel, which the "Deathstalker" movies are not based on.

That's not an easy question to answer. The best I can judge is he's a super fighter/warrior who lives in either Middle Earth, ancient Britain or the Renaissance Festival from Hell. He often has to chase down a magic object and help rescue some princess. He's a wonder to behold...but then, so is a microwave. Because three actors played this part--one played it twice, in fact-- they each bring their own unique sensibilities to the interpretation of this role.

Rick Hill was the first actor to tackle this character; he would return for part four. Looking like Will Ferrell's younger, pumped-up, stoner brother, with a bit of Marc Singer thrown in, Hill's Deathstalker is distinguished by a mile-long stare, a droning voice and a no-nonsense view of life: "I steal and kill to stay alive. Not for the luxury of glory." Good to know.

Jeff Terlesky, who played Deathstalker in entry two, on the other hand, is an easy-going guy with an eye for the ladies who isn't opposed to any get-rich-quick scheme that comes his way. With his fluffy, feathered hair, he resembles "Dance Fever" host Deney Terrio and is the most vain Deathstalker of the bunch. When he's about to face torture, Terlesky screams, "Not the hair! Not the hair! Anything but the hair!"

Then there is John Allen Nelson, star of  "Warriors from Hell" fame. He tries to play Deathstalker as an English soldier of fortune, but bails on the accent after about 10 minutes. He's also a jerk who complains about his poor pay and working conditions, but enjoys the endless stream of nooky opportunities his calling provides.

What are his quests? 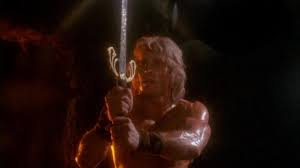 In part one, Deathstalker is sent by an old, nagging hag to find a chalice, an amulet and a sword, which will give him the powers to defeat an evil sorcerer. In part two, he helps a princess and has to wrestle a beefy Amazon. In part three, he helps a homeless princess find a land for her people. In part four, Deathstalker battles lots of stock footage and finds love.

Who are his enemies?

The first baddie Deathstalker faces is an evil sorcerer named Munkar (Bernard Erhard). He's not only taken over King Tulak's (Horacio Marassi) kingdom, but he's snatched his daughter Princess Codille (Barbi Benton), too. Munkar dresses like TV's "Maude" and has a tattoo that jumps from one side of his face to the next. He also has a slimy puppet pet that eats human eyeballs called Howard.

In part two, Deathstalker faces another evil sorcerer named Jarek and his sultry side-kick Sultana. A ditsy Princess named Evie (Monique Gabrielle) employs Deathstalker to help her regain her throne and free her subjects from Jarek's horrible grasp. To make ends meet, Evie stumbles around as a freelance "seer" or fortune teller until she can find a champion for her cause. There is also a Princess Evie evil twin, although one Princess Evie was more than enough, thank you.

Which brings us to part three, where Deathstalker faces Troxartas (Thom Christopher), a bald baddie who dresses like Julius Ceasre and Rudolph Valentino, depending on his mood. Troxartas is so obsessed with finding the magic city of Arandor that he neglects his sex-hungry wife and commands a bunch of zombie-like warriors to do his bidding because he keeps their souls in a mason jar. 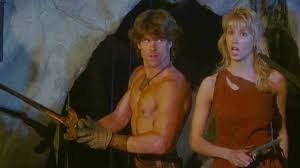 In the final "Deathstalker" outing, our hero meets up with yet another princess in disguise and yet another evil sorcerer--only this time the evil sorcerer is an evil sorceress named Queen Kana. She aims to ensure her rule by turning all the mighty warriors in the tri-state area into freaks who only serve her. She does this by arranging sports competitions that lure these chunks into her web of evil. Or something like that.

Unfortunately, the "Deathstalker" series is not distinguished by its enlightened view of women. Females in these movies exist to either get assaulted, get nude or get laid (by the Deathstalker or somebody else). Whether they are good or bad, the gals wear skimpy outfits that are neither practical or flattering. For instance, Marinda (from "Warriors from Hell" fame) resides in a shack surrounded by rocky terrain, dangerous mountainside paths that come with no guard rails and a fog-shrouded forest. The weather always looks to be about 65 degrees with a chance of rain. Therefore, Marinda's get-up of a super-short mini skirt and pixie boots seem better suited for an extra in an '80's hair band video than this craggy and forbidding landscape.

As noted earlier, women are assaulted in these flicks a lot. One of the ugliest of these encounters  involves Princess Codile (Barbi Benton) and a slimy, snot-covered pig man beast. Did I mention a crowd of on-lookers are cheering the swine as he readies to attack the princess? Barb is saved by Deathstalker at the last possible minute, but that scene is nasty.

However, if you think Deathstalker's heroic actions place him above the rancid, sub-mental brutes that populate these flicks, think again. In the first "Deathstalker", a group of robbers drag a female extra into a deserted gazebo to assault her. Deathstalker Rick Hill arrives out of nowhere and fights the bandits off. After they run away, Hill turns his attention to the kidnapped gal and decides to finish what they started. YUCK!

Shame on you, Roger Corman. 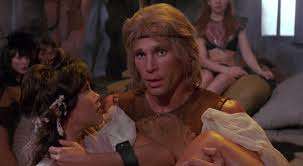 "Is somebody gonna sign for this?": Deathstalker (Rick Hill) wants to know what to do with Princess Codile (Barbi Benton).

"Who wants to know?"

I've always maintained that the backstory of a how a bad movie got made is just as important--and just as entertaining--as the flick itself. And the "Deathstalker" series is no exception.

For example, "Deathstalker"#2 was filmed in Argentina on a studio lot located right next to an airport and a highway. Naturally, this made sound recording pretty difficult. What's more, reportedly the studio lot had more garbage than a nearby landfill. There were tire fires, too.

Roger Corman has never met a budget that was too tight or a shooting schedule that was too short. So it's not surprising that "Deathstalker"#1 was cranked out in 37 days...or that the "magic orb" Princess Evie uses for her "predictions" in "Deathstalker"#2 is actually a doorknob. Through out the series, Corman was happy to recycle footage, soundtracks and costumes from previous films. Several actors even played multiple parts, another Corman trademark.

It seems that "Deathstalker"#2 was always having problems. With time running out and reportedly no finished script in sight, director Jim Wynorski and leading man John Terlesky put their heads together and came up with an outline for the rest of the movie that was partly inspired by Bugs Bunny cartoons. Terlesky also ad-libbed most of his lines. Even worse, while filming a graveyard scene, the generator conked out. No word on how long it took to get it up and running again.

Starring as Deathstalker did not lift anyone to movie stardom, like "Conan the Barbarian" did for Arnie Schwarzenegger. Instead, the most famous people to appeared in the "Deathstalker" movies were Barbi Benton and Carla Sands, who played Princess Codile and Princess Carissa, respectively. Besides being one of Hugh Hefner's cuddlemates, Barbi appeared regularly on such TV shows as "The Love Boat" and "Fantasy Island". Perhaps Barb's most memorable "Fantasy Island" appearance was the one where she played an Irish bar owner; her attempt at an "Irish accent" is one for the ages. Carla Sands, however, would leave show business behind and go on to become the American ambassador to Denmark during the Trump administration. Rick Hill, who played the Deathstalker twice, wrote the New York Times bestseller Pete Rose: My Prison without Bars. 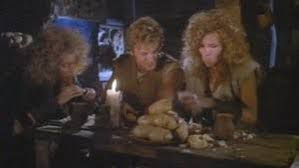 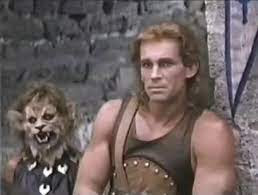 Deathstalker and a furry friend.

And the answer is...

There you go, movie lovers. Perusing this information should help you decide which "Deathstalker" entry is right for you. With so much bad acting, bad hair, bad F/X, bad direction, bad costumes and bad writing, the "Deathstalker" series is a four-part, all-cheese buffet that only Roger Corman could whip up. Just watch out for the nudity. And the violence against women. And the gore. I would personally recommend watching "Deathstalker"#3 first, because the crew from MST3K via Riff Tracks gives the flick a priceless once-over--but that's just me.

So, until next time movie lovers, please always remember and never forget, a bulging loin cloth does not a hero make. And SAVE THE MOVIES.