The People Who Inspired The Characters In "Babylon"

By now you've probably all heard and read about Damien Chazelle's take on 1920's Hollywood, "Babylon".

The film has received mixed reviews and so-so box office.

However, instead of posting another review of the flick (which I may still do), I thought it might be more interesting to discuss the real life inspirations fueling Chazelle's three in a half hour epic. 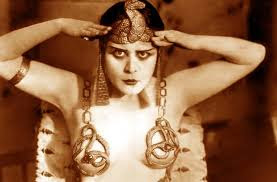 Theda Bara was the premiere "vamp" (short for vampire) of early Hollywood. She's considered a "truly silent star" because there's no recording of her actual voice. Although she's not featured in "Babylon", Bara is one of the silent eras most iconic figures.

"There are few people in the world who possess 'IT'", Glyn declared.

The lucky ones were Rex "the Wild Stallion star", Spanish actor Tony Monero, "the Ambassador Hotel doorman" and Clara Bow.

Like Nellie, Clara had an awful childhood. Her mother was mentally ill and her father was abusive. Also like Nellie, Clara was a natural on camera and, yes, she did allow her father to handle her money (which he lost). When the talkies arrived, Bow struggled to meet the demands of the new medium, just as Nellie did. Although it's true Clara liked to party, the rumor she had sex with the entire USC football team--as reported in the underground classic Hollywood Babylon by Kenneth Anger--is false. And mean. 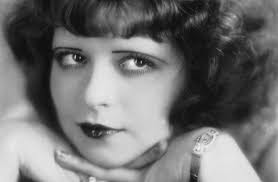 "She has IT": Clara Bow was the personification of a 1920's flapper/good time girl.

"Babylon" contains a scene where actress Constance Moore pitches a fit because Nellie is stealing her movie. However, the flick has this wrong. Samara Weaving was suppose to be Colleen Moore; actress/singer Constance More didn't make her film debut until 1930.

Along with Louise Brooks, Colleen helped popularize the bob haircut. Her screen image was that of a flirty flapper, but not as rambunctious as Bow. Like Clara, Moore didn't make the jump to talkies, but she came out way better financially: Colleen invested her movie earnings wisely and became a millionaire. Later on, she'd write a book about investing. Edith Davis, the mom of Nancy Reagan, was a life long friend.

Moving right along, we have the doomed matinee idol Jack Conrad (Brad Pitt).

The inspiration for Conrad is John Gilbert. Not only was he one the eras biggest stars, John had a very public romance with his co-star Greta Garbo. Like future super couples Elizabeth Taylor and Richard Burton or Ben Affleck and Jennifer Lopez, John and Greta's doings were written about in papers cost to cost. One movie theater, hoping to cash in on their popularity, advertised their latest flick (conveniently called "Love") with the tag line "Garbo and Gilbert are in 'Love'." 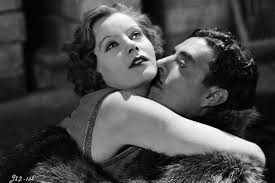 Greta Garbo and John Gilbert were hot and heavy on and off the screen.

Although Hollywood lore has it that John Gilbert's voice didn't jibe with his looks, his speaking voice was fine. Still, his career faded anyway, helped along by alcoholism and feuds with Louis B. Meyer. On the other hand, Greta's career only got bigger with the arrival of sound. To promote her talking debut "Anna Christie" in 1930, her studio MGM merely said "Garbo Talks!" and the audience arrived in droves (for the 1939 film "Ninotchka", MGM did the same thing, declaring "Garbo Laughs!"). To help her ex-boyfriend out, Garbo insisted Gilbert be cast opposite her in "Queen Christina" (1933). This was the the couple's fourth pairing (their other films were "Flesh and the Devil" (1926), "A Woman of Affairs" (1928) and the already mentioned "Love" (1927), but John's last film. He died in 1936.

After the failure of her film "Two Faced Woman" in 1941, Garbo left Hollywood for New York City. She shunned all publicity, refused to give interviews and wouldn't consider a comeback. She passed away in 1990.

Li Jun Li portrays the alluring singer/actress/writer Lady Faye Zhu. Her character is a mix of Anna May Wong and Marlene Dietrich.

Wong was one of the first Chinese-American actors to become a movie star. However, racism kept her from more prestigious roles. Anna seemed the natural choice to play O-Lan in the big screen adaptation of "The Good Earth" (1935). However, the studio gave the part to Luise Rainer, who was Austrian. MGM, who was producing the movie, said audiences wouldn't accept an Asian actress playing opposite a leading man (Paul Muni) who was white. Despite winning several Oscars, "The Good Earth" has become a prime example of "yellow face": using extensive make-up and costumes to make white actors appear Asian.

In "Babylon", Lady Faye wears a tux and sings a racy number about her "girlfriend's pussy". Later on, she kisses a female audience member on the lips. This is where the Dietrich influence comes in. Several of Marlene's films had her performing in white tie and tales--which was considered quite daring back in the day. The scene where Faye kisses a woman is copied directly from the movie "Morroco" (1930), where Marlene did the same thing. A "pre-code" Hollywood movie, "Morocco" has Marlene playing a world weary cabaret singer and Gary Cooper as the French Legionnaire who loves her.

"Mind if I smoke?": Lady Faye Zhu (Ji Lun Ji) is based on Anna May Wong with a bit of Marlene Dietrich thrown in for good measure. 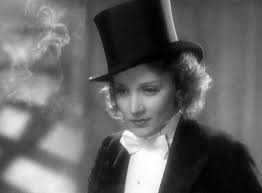 Marlene Dieteich as Mademoiselle Amy Jolly in "Morocco": "Mind if I smoke?"

Later on, "Babylon" shows Nellie and Faye having a romance. (Early in the flick, Lady Faye, writing titles for one of Nellie's first films, asks a co-worker, "I wonder if she swings both ways."). Nellie's studio believed the relationship would jeopardize La Roy's career, so Lady Faye is fired. With the arrival of talkies, Faye goes to Europe to work for Pathe' (a French film and distribution company started in the 1890's) and seek out other opportunities. Wong did this, too.

Once movies got the sound-thing under control, producers and directors decided to add singing and dancing to the mix. This allowed JoVan Adepo's character Sydney Palmer to branch out into "Soundies": mini movies that featured music, singing and dancing. Some film historians believe Soundies were the inspiration for the music videos of the 1980's (when MTV played nothing but music videos).

Duke Ellington, Louis Armstrong and Count Basie are just a few of the black artists who appeared in Soundies. Sydney Palmer is a composite of these men. Just as racism kept Lady Faye from a bigger Hollywood career, Sydney is also denied the chance to star in movies--even though his Soundies are huge hits. Later on, Sydney is asked to wear make-up so he will appear "more black" in his latest short subject. Unfortunately, this really did happen. Hollywood studios were worried that the lighting needed for film production made certain black performers "look white". In order to release their movies in the south, and to ensure audiences didn't think the bands were "mixed", black artists were asked to darken their skin.

SPOILER ALERT: disgusted by the practice, and everything else, Sydney leaves Hollywood and returns to playing nightclubs. Of all the "Babylon" characters, he's the luckiest, and it's clear he's happier playing live music than making movies.

Another "Babylon" character based on a real person is the drug dealer known as "The Count" (Rory Scovel). 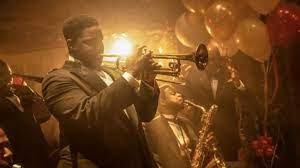 Musician Sydney Palmer (JoVan Adepo) wails away at a Hollywood party. His character will turn his back on Tinsel Town for good.

Rumor has it The Count was based on an actor who worked for Mack Sennett. He's mentioned in the underground classic Hollywood Babylon directly as "The Count". Described as a "quiet, gentlemanly actor", he supposedly supplied drugs to actors Wallace Reid (who died of an over dose), Mabel Normand, Barbara La Marr and others.  Hollywood Babylon, of course, is the most reliable source. Since its publication in 1959, most of the "scandals" detailed in the book have been debunked.

That said, another inspiration for The Count could be Captain Spalding. He was a military man who smuggled and sold drugs to silent film stars. He was implicated in the over dose/suicide of Olive Thomas in 1920, although he denied it. What is true is that struggling actors often did peddle drugs on movie sets in hopes of getting parts. In "Babylon", The Count is seen reminding studio exec Manny Torres (Diego Calva) that he wants "a monologue" in his next picture in return for getting the cash needed to pay off Nellie La Roy's gambling debts.

The final "based on a real person" character is Jean Smart's Elinor St. John, the ever-present gossip columnist. She's patterned after Sheilah Graham (who was British) and Louella Parsons.  Together along with Hedda Hopper, these gals were syndicated in hundreds of newspapers across the country and exercised considerable power. The film studios often supplied the gossip columnists with stories to keep potentially more damaging items out of the press. Getting on their bad side could be hazardous for your career. For example, when Gene Tierney failed to tell Louella Parsons she was pregnant, Parsons was so mad, she told Tierney not to expect anything good about her next film from her (I read this story in Ingrid Bergman's autobiography My Story).

When Orson Welles released "Citizen Kane", he so enraged Hedda Hopper that she organized a campaign to discredit the movie--and it worked.

Strangely enough for a movie set during the 1920's, "Babylon" didn't mention Charlie Chaplin, Mary Pickford, Gloria Swanson, Douglas Fairbanks or Lillian Gish. Of course, the movie was a fictional account of roaring twenties Hollywood, not a documentary, but leaving them out seems odd. 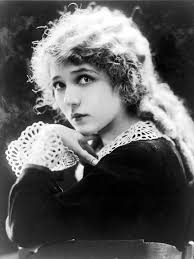 Mary Pickford was known as "The Little Girl with the Golden Curls" even though she was an adult. 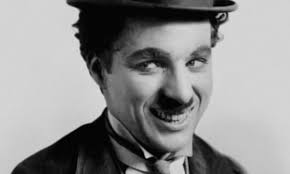 Charlie Chaplin as "The Little Tramp". He based the character on a man he saw at a mental institution.

Oh, and one more thing: the drug abuse shown in "Babylon" was pretty accurate. What? You think great grandma and great grandpa didn't know how to party? Movie sets in the '20's were teaming with drugs, especially cocaine, because it allowed the actors to work long hours and stay thin. The popularity of coke in the movie industry inspired something called "Cokie Comedies", the Cheech and Chong flicks of the day. Perhaps the most famous Cokie Comedy was "The Mystery of the Leaping Fish" from 1916 and starring Douglas Fairbanks (!). Doug was suppose to be a send-up of Sherlock Holmes, who was so crazy for coke that he wore a belt with syringes on it and had a clock that had "Dope" and "Drink" etc. instead of numbers. There is also a big can labeled "cocaine" on his desk, in case you missed the point. Just for the record, Fairbanks didn't like this movie.

This is where I leave you movie lovers. My next post, hopefully, will be about the real events depicted in "Babylon". Until next time, SAVE THE MOVIES.